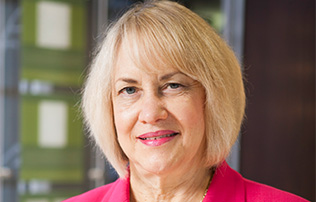 Marti Rice, PhD, RN, FAAN, Professor in the University of Alabama at Birmingham (UAB) School of Nursing, has received the Leadership in Research Award from the Southern Nursing Research Society (SNRS).

The Leadership in Research Award recognizes outstanding leadership, contribution, or promotion of nursing and health care research. This award is not given every year, rather bestowed at the discretion of the SNRS Board of Directors.

Rice is active in leadership positions in a number of nursing research organizations. She currently is Chair-Elect of The Council for the Advancement of Nursing Science (CANS), and the chair of the Succession Planning and Nominations Committee of the SNRS.

She is known for her community-based research examining factors related to blood pressure in preschool and school age children, including stress and anger. Her biobehavioral research program with children spans more than a quarter of a century and has been funded by the National Institute of Nursing Research (NINR).

Rice received the award on February 27, 2015 at the annual SNRS meeting in Tampa, Fla.

The mission of the Society is to Advance Nursing Research through dissemination and utilization of research findings, facilitating the career development of nurses and nursing students as researchers, promoting the image of nursing as a scientific discipline and enhancing communication among members.
Read 8450 times Last modified on March 17, 2015
Tweet
Tagged under