Dr. Booth's worldwide legacy of teaching, research and service helped the School rise to the national prominence it enjoys today 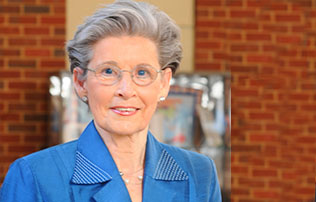 Widely honored for her leadership in nursing education, Dr. Booth in April of this year became one of 25 recipients of the first Visionary Pioneer Awards awarded by the University of Maryland School of Nursing to recognize that School’s outstanding alumni, living and deceased. Dr. Booth and her fellow Visionary Pioneer Award recipients were signaled out for their impact on the nursing profession based on their leadership, innovation, or entrepreneurship.

Known especially for her pioneering work in nurse practitioner programs and for contributing to nursing’s role in global health, Dr. Booth in 1999 was awarded an honorary doctoral degree in nursing by the King of Thailand – making her the first foreign nurse to receive this honor in Thailand. During her years of nursing education leadership in Alabama, she was inducted into both the Alabama Nursing Hall of Fame and the Alabama Healthcare Hall of Fame.

Dr. Booth was born and reared in the small town of Seneca, South Carolina, as the youngest of three children. Beginning at age 3, she expressed a desire to start to school. That yearning was so strong that, at age 4, she was occasionally slipping off from home to follow her older brother and sister as they walked to school. A few times she made it as far as the schoolhouse. Finally one of the teachers said, “This baby is going to get killed if she stays on the road. We might as well make an exception and just bring her on into school.” So it was that little Rachel was granted the opportunity to start school early.

After high school graduation, she pursued her dream to become a nurse, attending Furman University of a year and then graduating from a diploma nursing school, the Greenville (South Carolina) General Hospital School of Nursing.

Dr. Booth later would say that becoming a registered nurse made her very professionally marketable after she married Richard B. Booth, whose career was in the U.S. Air Force. Wherever the Air Force sent Richard, she could find a job as a nurse. They were stationed in Colorado, California, Greece (where their only child, son Kevin, was born), Texas, Alaska, and ultimately in Washington, D.C., where Richard concluded his Air Force career with assignment to the National Security Agency.

It was after moving to the Washington, D.C.-Maryland area that Rachel Booth launched her quest for degrees at the University of Maryland, earning baccalaureate and master’s degrees in nursing, and then a PhD in education, with a major in administration of higher education.

In addition to being a University of Maryland (UM) student, Rachel Booth held UM administrative and faculty positions in nursing service and nursing education – rising at UM’s nursing school to become Associate Dean for Undergraduate Studies. It was at UM where she began her pioneering nurse practitioner work during an era when the nurse practitioner movement was just taking root. She attracted national attention as she led the way in setting up prototype clinics that utilized nursing practitioners and also helped in writing a grant that led to the education of nurse practitioners in a UM program she directed.

The third president of the University of Alabama at Birmingham (UAB), Dr. Charles A. “Scotty” McCallum, recruited Dr. Rachel Booth to become the third dean of the UAB School of Nursing. At the time Dr. McCallum recruited her, she was at Duke University, as Assistant Vice President for Health Affairs and Dean and Professor of the School of Nursing. During the 18 years Dr. Rachel Booth led the UAB School of Nursing, she put in place strong resources for a research program, brought progressive nurse practitioner programs to life, established a PhD in nursing program, and founded the School’s community-support group, the Board of Visitors. She also embarked the School on an exciting global health journey that brought foreign students into the School and immersed the School’s faculty and students in experiences that stretched to such faraway locales as Thailand, China, Saudi Arabia, Russia, East Africa, Honduras, and Brazil.

Dr. Rachel Booth was predeceased by her husband, Richard, who died in 2013. She is survived by her son, Kevin, who lives in Edgewater, Maryland, and by three grandchildren – Brittany Kay, Katherine Rae, and William Bryan.

Click here to read her full obituary in The Birmingham News.
Read 10045 times Last modified on July 29, 2015
Tweet
Tagged under