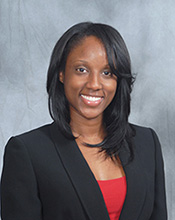 University of Alabama at Birmingham (UAB) School of Nursing alumna Lindsey Harris, MSN, FNP-BC, has been named the National Black Nurses Association (NBNA) 2015 Advanced Practice Nurse of the Year. She will be presented with the honor at the annual Nurse of the Year Awards Ceremony August 2, 2015 during the President’s Gala in the Atlanta Hilton Hotel.

Harris was recognized for her excellence in the clinical area at the advanced practice level. She is a strong patient advocate and mentor for other nurses.

Harris earned her master’s of science in nursing from UAB in 2011. She currently works on the Inpatient Glycemic Management Team at UAB Hospital.
Read 8224 times Last modified on July 29, 2015
Tweet
Tagged under