University of Alabama at Birmingham (UAB) School of Nursing Assistant Professor Aimee Holland, DNP, CRNP, WHNP-BC, NP-C, RD, has been named the inaugural recipient of the Rising Star Award given by the National Organization of Nurse Practitioner Faculties (NONPF).

The award was created to recognize a faculty member within the first five years of their academic career who has demonstrated extraordinary promise in two or more of the areas of teaching, service, practice, research, policy or administration. The award also acknowledges the positive impact of Holland’s contributions on the nurse practitioner profession, her academic institution and educational system and denotes sustained and progressive achievement consistent with a “rising star.” 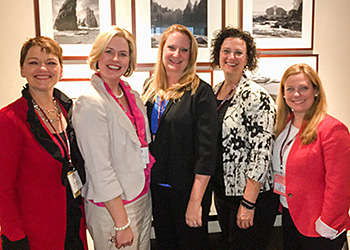 Dr. Aimee Holland, second from left, was among group of faculty from the UAB School of Nursing who attended the 42nd annual meeting of the National Organization of Nurse Practitioner Faculties in Seattle in mid-April. Joining Holland at the meeting, where she was presented the group's inaugural Rising Star Award, were, from left to right, Dr. D'Ann Somerall, Dr. Ashley Hodges, Dr. Cheryl Robinson and Dr. Michele Talley.

Since joining the Student Health & Wellness Center staff, Holland has worked diligently to expand women’s health care services, in particular expanding contraceptive options made available to them. She also identified the need for colposcopy services and successfully secured the needed equipment, making UAB’s one of only a few student health centers in the U.S. that have this capability.

“Dr. Holland demonstrates a level of student engagement and innovation which is unparalleled,” said Hodges, who serves as the School’s assistant dean for Graduate Clinical Programs. “She is a dynamic motivator and a true advocate for students, colleagues, patients and the nursing profession overall. She is an exceptional role model for students and new and existing faculty alike.”

Holland earned her Doctor of Nursing Practice degree from the School in 2012 and was named to the faculty that same year. She was soon appointed Master of Science in Nursing (MSN) Women’s Health Nurse Practitioner Specialty Track coordinator, and at present, is the assistant director of the MSN Program.

She is actively involved in leadership roles with the National Association of Nurse Practitioners in Women’s Health. She has served on the organization’s board of directors since 2013 and is currently serving a two-year term as chair-elect. In 2013, she was named the UAB National Health Service Corps (NHSC) ambassador and in 2014 received the national Award for Excellence in Community Service from the Association of Women’s Health, Obstetric, and Neonatal Nurses for her service with the NHSC federally qualified health centers in Alabama.

Holland also serves on numerous school and university committees, including serving as 2015-2016 chair of the Faculty Organization and Executive Committees.

In receiving the award, which was presented at the 42nd annual NONPF meeting in Seattle in mid-April, Holland chose to shine the spotlight on those around her in the UAB School of Nursing as well.

“This award is a reflection of the amazing individuals I call mentors, colleagues and family and a reminder of all the shining stars surrounding me here at the UAB School of Nursing,” Holland said.

NONPF represents approximately 90 percent of all institutions with nurse practitioner programs in the United States as well as faculty from programs in Canada, the United Kingdom and other countries.