These six are among 164 highly distinguished nurse leaders inducted by the AAN on Oct. 22 during the Academy’s 2016 Transforming Health, Driving Policy Conference in Washington, D.C.

The Academy is comprised of more than 2,400 nurse leaders in education, management, practice, policy and research. Academy Fellows include hospital and government administrators, college deans and renowned scientific researchers.

With the addition of this newest class, Academy Fellows represent all 50 states, the District of Columbia and 28 countries.

Selection criteria include evidence of significant contributions to nursing and health care and sponsorship by two current Academy Fellows. Applicants are reviewed by a panel comprised of elected and appointed Fellows, and selection is based, in part, on the extent to which the nominee’s nursing career has influenced health policies and the health and wellbeing of all. New Fellows are eligible to use the FAAN credentials (Fellow of the American Academy of Nursing) after their induction. 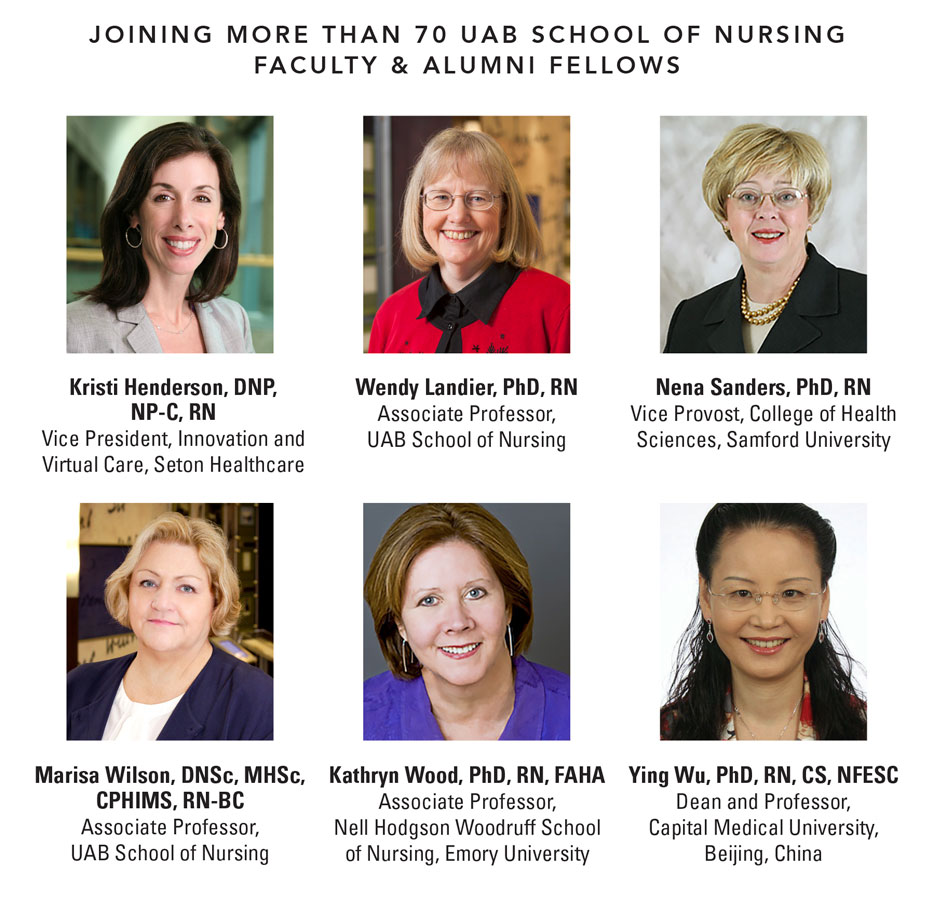 Brief biographical info on each of this year’s new inductees:

Wendy Landier, PhD, RN, CRNP, PPCNP-BC, CPON, is an associate professor in the UAB schools of Medicine and Nursing, and a member of the UAB Institute for Cancer Outcomes and Survivorship. Her research focuses on understanding and improving health outcomes in childhood cancer survivors, with an emphasis on development, implementation, and refinement of guidelines for survivorship care, acquisition of health knowledge in survivors and secondary cancer prevention. She serves as Chair of the Children’s Oncology Group Nursing Discipline, the National Cancer Institute-funded pediatric oncology clinical trials group. She has played a key leadership role in development of the Children’s Oncology Group Long-Term Follow-Up Guidelines, which now set the standard for care of childhood cancer survivors across North America, and remains instrumental in leading the refinement of these guidelines as new evidence emerges. She also serves as one of the founding members of the International Guidelines Harmonization Group, which is focused on using evidence to harmonize recommendations for survivorship guidelines across international clinical trials groups, and co-leads the International Ototoxicity Working Group. She currently leads two National Institutes of Health-funded research studies, focusing on secondary cancer prevention in childhood cancer survivors and adherence to therapy in children with leukemia.

Marisa L. Wilson, DNSc, MHSc, CPHIMS, RN-BC, is a board certified informatician with an interest in health information technology policy, implementation, and positive patient outcome and clinical efficiency supported by technology. She spent more than 15 years as a nurse clinician working in acute physical rehabilitation, medical-surgical, and telemetry units. In addition, Wilson spent more than 25 years as an analyst, project leader and manager implementing information systems in public health and acute care settings.

Kristi Henderson, DNP, NP-C, RN, who is nationally recognized for successfully increasing access to high-quality, low-cost healthcare for thousands of patients through virtual care models such as telehealth, was named the Ascension Texas Ministry’s Vice President of Innovation and Virtual Care in 2015 as part of the Seton Healthcare family. She has 20 years’ experience as an innovator, educator, researcher and clinician. She came from the University of Mississippi Medical Center (UMMC), where she was Chief Telehealth & Innovation Officer. In Mississippi, she led the development of a statewide telehealth program, which is recognized as a national model. She has testified before the U.S. Senate Committee on Commerce, Science and Transportation’s Subcommittee on “Advancing Telehealth through Connectivity,” as well as the Subcommittee on Rural Health and the White House Domestic Policy Council. She earned her Doctor of Nursing Practice (DNP) from the School in 2010.

Nena Sanders, PhD, RN, has been active in health care for more than 35 years. Her professional nursing career is multifaceted and includes work as a staff nurse, cardiovascular clinical nurse specialist, nurse administrator, nurse educator, health care consultant, and entrepreneur. In addition to her practice of nursing, she has had tremendous success as a grant writer, researcher and author. Sanders has also been involved in developing, implementing and evaluating graduate nursing education programs for nearly three decades and she participates in numerous professional and community service endeavors. She is a three-time graduate of the UAB School of Nursing, earning her Bachelor of Science in Nursing (BSN) in 1976, her Master of Science in Nursing (MSN) in 1979 and her Doctor of Philosophy in Nursing (PhD) in 1985.

Kathryn Wood, PhD, RN, FAHA, has devoted her nursing career to improving the quality of life for individuals with atrial arrhythmias through scholarship, leadership, and promoting clinical practice changes. Her research has generated enhanced understanding of symptoms, diagnosis, and measurement of outcomes surrounding supraventricular tachycardia (SVT) in women -- a population frequently misdiagnosed and not offered timely curative treatments. In the national setting, her leadership as vice chair of the American Heart Association’s (AHA) Council on Cardiovascular Nursing’s program committee led to representation of nursing on important AHA practice guidelines and scientific statements. Wood was also invited by the European Society of Cardiology to participate in the development of guidelines for arrhythmia patient education and specific education for managing new anticoagulant medications for providers and patients. She earned her MSN from the School in 1984.

Ying Wu, PhD, RN, CS, NFESC, is the Dean and Professor of School of Nursing, Capital Medical University, Beijing, China. She is a past President for Asia Pacific Association for Medical Informatics-APAMI (2012 to 2014), and has previously assumed the leadership role for 24 research and academic associations, and government affiliated academic organizations in China, such as the Chinese Nursing Association, China Medical Informatics Association, etc. She has published more than 70 research papers and book chapters, and served as editor or vice editor for some of those books, most of them highly recognizable in the field of nursing. Her research interests include nursing informatics, critical and continuous care of patients with cardiovascular and respiratory disease, and core competency-based education in nursing. She is the primary investigator for many research projects including projects and grants funded by the National Natural Science Foundation of China. She earned her MSN from the School in 1998.

The American Academy of Nursing serves the public and the nursing profession by advancing health policy and practice through the generation, synthesis and dissemination of nursing knowledge. The Academy’s Fellows are nursing’s most accomplished leaders in education, management, practice and research and have been recognized for their extraordinary contributions to nursing and health care.