Morrison, Selleck among those honored by Nurse Practitioner Alliance of Alabama

University of Alabama at Birmingham (UAB) School of Nursing Professor and Associate Dean for Clinical and Global Partnerships Cynthia Selleck, PhD, RN, FNP, FAAN, and Associate Professor Shannon Morrison, PhD, CRNP, FNP-BC, were among the award winners recognized at the 2016 annual meeting of the Nurse Practitioner Alliance of Alabama (NPAA).

Selleck received the organization’s highest honor, the Power of One Award, given annually to a person who is a change agent for the NP profession.

“I was very surprised and very appreciative of being selected for the Power of One Award,” Selleck said. “What I said in my thank you to the NPAA board was that while I haven’t been a practicing nurse practitioner for about 10 years, nurse practitioners are still near and dear to my heart. Being recognized for what I am able to do now to impact the nurse practitioner profession and health care locally and globally through my work at the UAB School of Nursing is very special.” 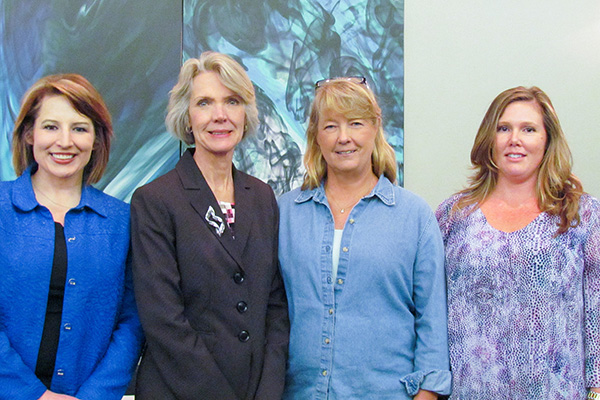 Morrison joined the UAB School of Nursing faculty after completing her PhD at the School in 2010. Since then, she has taught across both undergraduate and graduate programs. Her research focus is on the effects of diet and physical activity on insulin sensitivity, body composition, and glucose metabolism in groups at high risk for development of type 2 diabetes, particularly overweight/obese minority adolescents.

She has maintained national certification as a family nurse practitioner since 2002 and continues to work part-time as an NP in the emergency department at Northeast Alabama Regional Medical Center in Anniston, Alabama.

Guin-Renfroe is described as “one of those folks who flies under the radar as she is an amazing clinician and leader among leaders in the UAB Health System but is always the quiet one in the crowd.” A prolific writer, she has authored numerous publications related to medication management and rehabilitation management for patients with physical limitations.

Birchfield had dedicated the past 15 years of her career to serving patients in rural Bibb County. She works as a family nurse practitioner in the emergency room and rural health clinic at Bibb Medical Center while also serving as the chief nursing officer for the hospital.

May has extensive experience in emergency/trauma nursing and acute and primary care pediatric nursing. Her areas of interest include children with special needs and disabilities and school health nursing. She has a clinical practice in the pediatric clinic of the University Medical Center.

This annual meeting marked the 10th anniversary of the NPAA, which traces it roots to the UAB School of Nursing.

Cindy Cooke, DNP, FNP-C, FAANP, current president of the American Association of Nurse Practitioners and a 2013 graduate of the School’s DNP Program, is a founding member of the NPAA and served as its first president. Assistant Professor and Robert Wood Johnson Foundation Executive Nurse Fellow Joy Deupree, PhD, MSN, RN, WHNP-BC, who earned her BSN from the School in 1994 and her MSN in 1997, is also a founding member and served as president in 2012-13.

Like all the award winners, Selleck was extremely proud to be recognized by such a prestigious organization made up of so many UAB School of Nursing colleagues and distinguished alumni.

“I value the importance of nurse practitioners, and while I recognize the great strides Alabama NPs have made in the last five years, we have tremendous strides we still need to make,” Selleck said. “Nurse practitioners are part of the solution to the state’s dire health outcomes, and I look forward to continuing to work with NPAA and others to continue to advance NPs in Alabama.”