Turner-Henson and 25 others in EPA Region 4, which covers the Southeast, were honored for providing visionary leadership in protecting children from harmful exposures where they live, learn and play.

As part of the recognition, the EPA noted that Turner-Henson “has established collaborative partnerships between local, state and national agencies and community organizations to improve children’s health.” 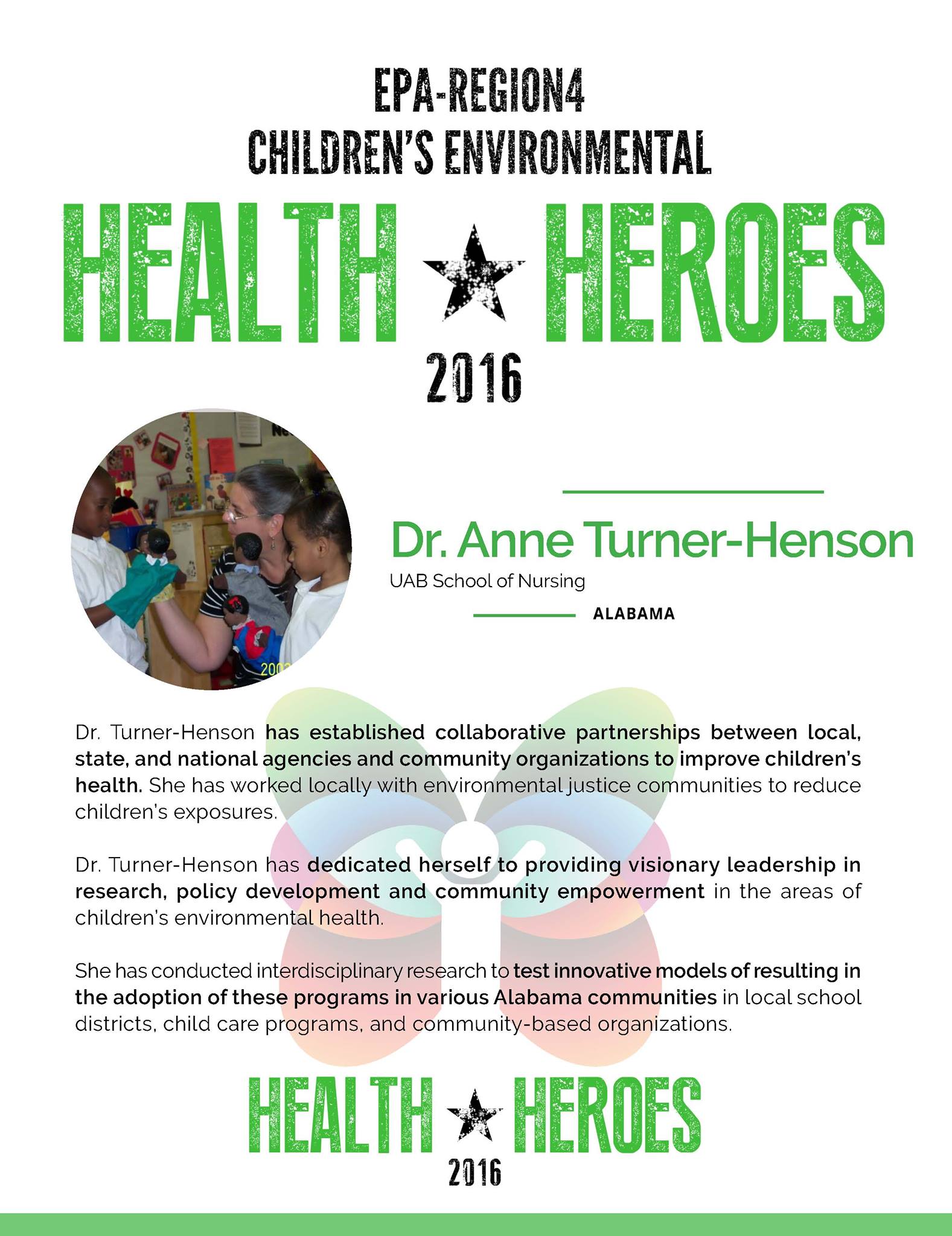 Turner-Henson said it was gratifying to be saluted by her peers in this fashion.

“Doing environmental health work has been a major thread in my research program for the last 20 years,” said Turner-Henson, who marked 33 years at UAB in September 2016.

As a pediatric nurse throughout her professional career, Turner-Henson views her role as promoting and protecting children’s health.

“Frederick Douglas stated it is easier to build strong children than repair broken men,” Turner-Henson said. “Working to promote healthy environments ensures that they can grow up healthy and safe, from an environmental perspective.”

Turner-Henson was also cited for her service on multiple state and national committees as a child health advocate and for empowering communities through building grassroots initiatives to reduce children’s environmental risks and promote healthy communities. The recognition also noted her dedication in research and policy development in areas of children’s environmental health.

Turner-Henson has done a majority of her work with the Jefferson County Committee for Economic Opportunity (JCCEO) Head Start Program, which provides services to more than 1,500 children ages 3 to 5, and their families, in the Birmingham area.

Along with JCCEO Head Start and Early Start (HS/EHS) staffs, she assisted in the development of a Red Light, Green Light Program that allows the staffs to determine the local air quality daily and adjust children’s outdoor activities accordingly. A HS/EHS staff member receives a text message from airnow.gov and, if it is a poor air quality day, they can keep the children inside away from potential harmful exposures.

“The text message provides information about outdoor air quality, informing them if the air quality will be good or poor that day,” Turner-Henson said. “If the ozone or the particulate matter levels are high, they may not take them outside to play that day. There are traffic light signs posted in the centers near the front door and the playgrounds, and we use red, yellow and green to tell the staffs what to do. It is a simple system, but it works well in helping the children breathe better.”

Turner-Henson also served as principal investigator on a project funded by the Centers for Disease Control and Prevention that conducted an intervention trial to teach children how to talk to adults about not smoking around them.

She also served for six years on the EPA’s Children’s Health Protection Advisory Committee, worked with a team from UAB on a school-based asthma project which looked at environmental risks and asthma, and worked with communities in north Birmingham on a Superfund contamination site.

Turner-Henson earned her Doctor of Philosophy in Nursing (PhD) from the UAB School of Nursing in 1992.
Read 9970 times Last modified on October 28, 2016
Tweet
Tagged under