Honor named for her long-time colleague, mentor recognizes those who impact knowledge of nursing administration, leadership
By Jimmy Creed

Being named the award’s initial recipient is a special honor for Shirey, who counted Smith as a trusted mentor and guide in her own journey to becoming an accomplished scholarly writer and journal editor. 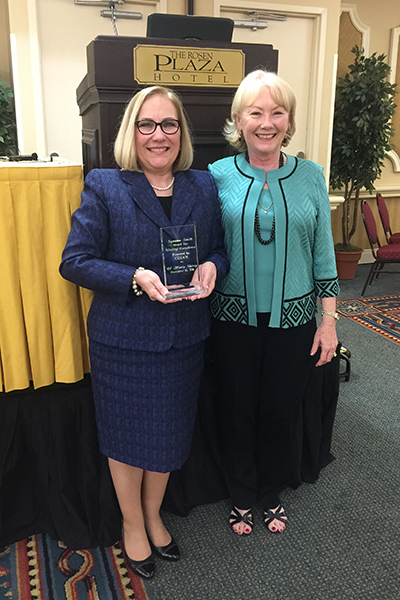 Dr. Barbara Cherry, right, president-elect of CGEAN, presented Dr. Maria Shirey the Suzanne Smith Memorial Award for Scholarly Writing Excellence at the International Nursing Administration Research Conference held recently in Orlando. “She was someone who gave me the opportunity to write a column in her journal and who, when I submitted manuscripts, always gave me honest feedback,” Shirey said. “She was straightforward and very direct. She was just a generous person in terms of writing, editing and cultivating the careers of others."

Her previous experience also includes contributing a column on entrepreneurship to the journal Clinical Nurse Specialist, serving as the deputy editor of Nursing Forum and serving as a co-guest editor on multiple assignments for Nursing Administration Quarterly. She is also active in The International Academy of Nurse Editors (INANE), has published over 100 journal articles and served on multiple editorial boards in her career.

Shirey was particularly pleased to receive the inaugural Suzanne Smith award for its connection to her long-time colleague and for what she believes it truly represents.
“It recognizes the writing excellence, but it also takes into account the whole body of my work in nursing administration,” Shirey said. “It recognizes my writing to build the knowledge base in my area of expertise, which is nursing leadership and management. It was really special to me on many fronts.”

Shirey, whose article “Authentic Leadership: Creating Healthy Work Environments for Nursing Practice” is the most cited in the entire body of literature related to that topic, hopes her passion for scholarly writing will influence others among the faculty and students at the UAB School of Nursing to impact health care locally and globally in similar fashion.

“It is through writing that you enhance the knowledge of the discipline,” Shirey said. “You build a body of work that over time becomes cumulative. That cumulative body enhances the knowledge base in the field, and that is how you have impact.

As an example, Miltner cited the recent incorporation of Shirey's work into the School's interprofessional VA National Quality Scholars Program as part of the program's leadership development series.

"Most importantly, it is most fitting that Maria is the first recipient of this award for scholarly writing excellence as she is carrying on Suzanne Smith’s legacy through her ongoing efforts to encourage students and new faculty to develop their writing skills and disseminate their own work," Miltner said. "Her mentorship supports a whole new cadre of nursing scholars. We are fortunate that she is part of our UAB community."
Read 10025 times Last modified on December 12, 2016
Tweet
Tagged under