Program preparing missionary, U.S. Naval reservist for next step in a life of service
By Jimmy Creed
University of Alabama at Birmingham (UAB) School of Nursing student John Woods, BSN, SRNA, has devoted his life to serving others.

At 16 he went on his first mission trip, and later, he and his wife, Tina, spent almost seven years as missionaries in Tegucigalpa, Honduras.

Before going into mission work, Woods spent 12 years as a reservist in the Mississippi Air National Guard – which included several deployments to the Middle East – and after returning home from Tegucigalpa in 2012, he joined the U.S. Navy Reserve, where he is a lieutenant junior grade.

For Woods, a senior in the School’s Master of Science in Nursing (MSN) Nurse Anesthesia Specialty Track, the next step in his life of service will be a career impacting health care locally and globally as a certified registered nurse anesthetist (CRNA).

His passion for helping others, particularly in the mission and health care fields, traces back to when he was 12 and watching his father, the business manager of the local physician’s clinic and pastor of a small community church in north Mississippi, put together a mission trip to Honduras in 1982. 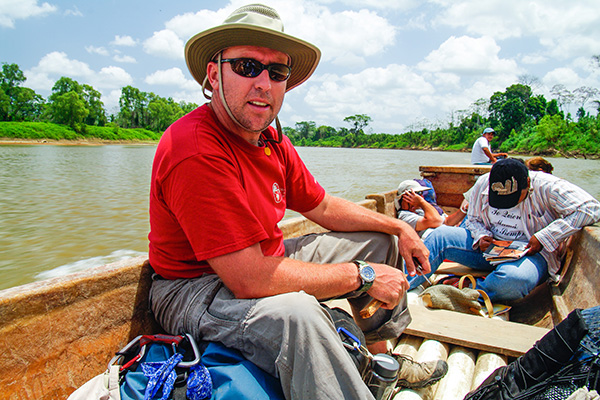 During his time as a missionary in Tegucigalpa, Honduras, John Woods frequently traveled the Plantano (or Banana) River by dugout canoe providing various kinds of assistance to the people in need of the area. “I also remember when my dad took me for the first time when I was 16 and the impact it had on me,” Woods said. “It would be an understatement to say that the mission field changed my life.”

Today Woods and his wife oversee Sow A Few Seeds, a non-profit organization based in Petal, Mississippi, that helps smaller groups and churches interested in mission work connect with communities and organizations in need of carpentry, medical, evangelical and other types of assistance. Woods describes Sow A Few Seeds as a clearinghouse where information is exchanged and contacts are made, but it also helps with the logistics of putting together trips and more.

“We can connect people as simply as giving a name, a mailing address and an email address,” Woods said. “We can also help you get plane tickets and such or we can actually help you start a team or even lead your team if that is what you need.”

After graduation, Woods will put use his training as a nurse anesthetist to continue his mission work. He is leading a surgical team mission to Honduras in July for a church that has several surgeons as members. While there he will prepare a representative of the church to lead future missions and support the team’s nurse anesthetists as needed.

“We’re going for a week to provide gynecological surgical services, and there will be a Vacation Bible School and other things going on with the team,” Woods said. “With Sow A Few Seeds, we don’t charge a fee. We just know a lot of organizations, missionaries and people that need help, and we try to help them.”

Woods is equally passionate about his time as a CRNA student at the UAB School of Nursing and his future profession.

In his addition to his missionary and military commitments, Woods serves as the School’s student representative to the American Association of Nurse Anesthetists (AANA) Foundation and helped plan and support its annual fundraising dinner and dance at the 2016 Nurse Anesthesia Annual Congress. Woods was one of six CRNA students to represent the UAB School of Nursing at the event.

“There are a lot of opportunities, and Dr. McMullan is very interested in students taking advantage of those,” Woods said. “Being able to attend the Annual Congress is representative of the variety leadership and other opportunities available to us here at the UAB School of Nursing. It is also a great networking opportunity that will be beneficial to my career going forward, for sure.

Woods’ connection with Gillis, CRNA, BSN, APNP, even led to him getting a team member for his July mission trip.

“Wilma goes on mission trips as well, and she has a 17-year-old girl she knows in Wisconsin who wanted to go, but Wilma’s group does not take people under the age of 18,” Woods said. “Wilma contacted me because she knew of my work with Sow A Few Seeds, and now the young lady will be going with us. I can’t wait to watch as the week goes on and see how the trip impacts her in that short time.”

A story from his time in Tegucigalpa best illustrates why helping others is so close to his heart.

Woods had a visiting team in a nearby small mountain village that had no electricity and no running water. Some of the houses were constructed from Adobe bricks, others a type of cinderblocks. All had dirt floors.

During their stay, the team members befriended a young village boy and gave him some clothes they had found that fit him. As they prepared to leave, they also gave him some sleeping bags, a tent and other items they weren’t going to take home.

The next day, the boy’s father came and asked if Woods and some of the other men in the group could come to his house that evening. When they arrived the boy showed them his room, where the sleeping bag was spread across a frame with ropes and a quilt that was his bed.

The boy had given a sleeping bag to his sister and one to his mother and father, and the family wanted to thank them. As they prepared to leave, the father went around the house and came back with a full stalk of bananas which he presented to the group in appreciation.

“As we were leaving several of the guys were laughing and joking about the bananas,” Woods said. “I stopped them because what they weren’t aware of is that a banana tree only makes one stalk of bananas a year. In these small villages, there will be three or four banana trees around each house, and they are something the families either consume for themselves or sell to make some income.

“Those clothes and leftover sleeping bags meant so much to that family they were willing to give up a portion of their income to thank us. That is the impact serving others can have, and I am thankful for all my past opportunities and the many more to come through my continued work as a missionary, a serviceman and a CRNA.”
Read 6701 times Last modified on March 01, 2017
Tweet
Tagged under