Cited for impact on innovative nursing education
By Staff 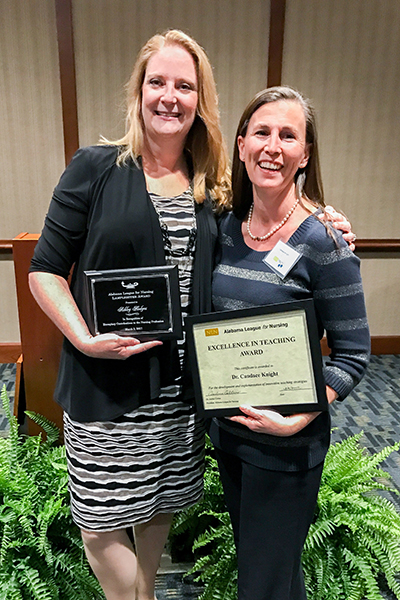 Dr. Ashley Hodges, left, and Dr. Candace Knight were honored by the Alabama League for Nursing as innovative educators whose expertise sets standards for their colleagues throughout the state.Two University of Alabama at Birmingham (UAB) School of Nursing faculty members have been recognized by the Alabama League for Nursing (ALN) as outstanding nurse educators. They received their awards at the organization’s recent annual conference.

“They are both so deserving of these awards,” Smith said. “The Excellence in Teaching Award is highly competitive, and we are thrilled Dr. Knight was recognized by the ALN in this fashion. Dr. Hodges was honored for her expertise in the provision of innovative distance education programs at the graduate level, competency-based education, curriculum evaluation and both educational and clinical leadership regionally and nationally.

“It was a highlight for the UAB School of Nursing at what was an excellent conference in many respects.”

Knight was recognized specifically for a multidisciplinary obstetric simulation that provided her students a real-life scenario caring for a family that has experienced an intrauterine fetal demise.

In the clinical part of the simulation, students cared for the family in the aftermath of the demise, but instead of participating in a typical post-simulation debriefing, they met with a panel of physicians, nurses, chaplains and others who deal with such occurrences as part of their jobs at UAB Hospital to discuss the outcomes.

“Dealing with death, particularly a child’s death, is a hard subject to cover in a lecture,” Smith said. “Dr. Knight was willing to go out on a limb to ensure the students get a piece of education they greatly need. They were able to get a realistic view of what to expect if they go into child health or obstetrics and have to deal with such scenarios. They also now have information from people familiar with the situation to fall back on when they embark on their careers.”

Hodges was honored for her steadfast, innovative leadership of the School’s graduate education programs.

“She ensures we are staying far ahead of other nursing schools when it comes to graduate education, especially in our distance-accessible programs,” Smith said. “She makes certain we are going above and beyond the standards and including innovative teaching styles in all that we do.”

Smith was also pleased at a sizable increase in ALN participation by her fellow UAB School of Nursing faculty and in the annual conference as a whole.

As president-elect Smith specifically focused on increasing ALN membership and participation, and her efforts have been quite successful.

Attendance for the two-day conference held at Samford University averaged 180, up from the average of 90 to 100 before Smith became president-elect. The ALN also received 40 abstract submissions for podium presentations and approximately 60 submissions of poster presentations, significant increases from years past.

Those numbers also reflected significantly increased interest and enthusiasm for supporting nursing education in Alabama by those affiliated with the School. In all, 20 different UAB School of Nursing faculty did 10 podium presentations and 12 poster presentations. 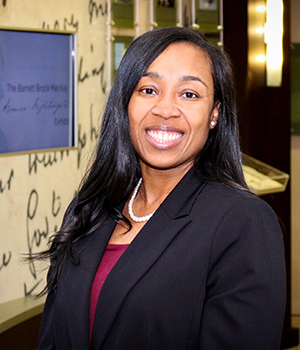 “I get a lot of support from the administration here at the School, particularly from Senior Associate Dean for Academic Affairs Linda Moneyham, PhD, RN, FAAN, who is on the National League for Nursing board, and I am looking forward to having even more support from my colleagues,” Smith said. “Having two more faculty within the leadership is going to make it a whole lot easier to get things done, and we are looking forward to working together.”

As president, Smith has lots of new ideas and different things she wants to try. For example, this year’s annual conference featured breakout sessions throughout each day instead of highlighting just one keynote speaker for the duration, a move that was well received by the membership.

“We decided to do breakout sessions to open up the ability for those attending to do more networking and sharing of what’s going on in Alabama as it relates to innovative teaching strategies, and it was a huge success,” Smith said. “There are many things we can do in this way to increase ALN membership, merge the community and junior colleges and universities, and forge the community of nurse educators in Alabama.

“We all have something we can learn from each other, and my overall goal is to build an organization that supports and encourages mutually beneficial relationships among nurse educators.”