For her continuing leadership in fostering diversity and inclusivity at the University of Alabama at Birmingham (UAB) School of Nursing and beyond, the American Organization of Nurse Executives (AONE) has named Assistant Professor Martha Dawson, DNP, RN, FACHE, its 2017 Prism Diversity Award winner.

The AONE Prism Diversity Award recognizes an organization or individual that has advanced diversity efforts within the nursing profession, the community or the individual’s organization.

Dawson, who has been affiliated with AONE for 27 years, has a long track record of working to promote diversity and inclusivity within the School and at many levels throughout the community and nation.

“I was involved in diversity before the word came in vogue,” Dawson said. “I have always believed in respecting others for what they can bring to the table, and I have always looked at each individual, not by position or title, but by what I can learn from them. 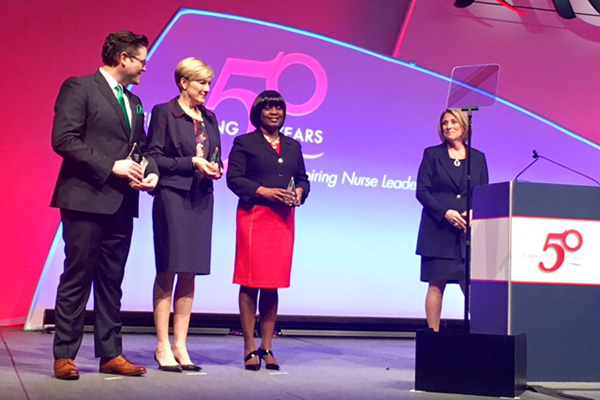 With the Prism Award, AONE, which has over 10,000 members and is celebrating its 50th Anniversary, also honors an individual who is a leader in supporting the AONE Guiding Principles for Diversity in Health Care Organizations and demonstrates mastery of the AONE Nurse Executive Competencies – Communication and Relationship Building, Diversity.

“It is one of the group’s highest honors, and I am very pleased to be the 2017 recipient,” Dawson said.

Dawson received several letters of support from local, national and international organizations and their representatives, including the National Black Nurses Association (NBNA) and the Alabama Health Action Coalition (AL-HAC). She currently serves as secretary of the NBNA and co-chair of its Diversity Committee and as chairperson of the AL-HAC Committee on Diversity.

“She is a stellar professional, advocator, mentor and scholar with high moral standards, integrity and a standard of excellence that I admire,” said Eric J. Williams, DNP, RN, CNE,

president of the NBNA. “She has distinguished herself as a leader in the profession…actively seeks ways to improve health for all Americans particularly those underserved, underrepresented and uninsured by trying to eliminate health care disparities.”

Within the UAB School of Nursing, Dawson has been the principal investigator for a Health Resources & Services Administration (HRSA) workforce investment grant which focused on helping students from diverse and under-represented backgrounds enter nursing school and graduate at the undergraduate level. She has also been active with the School’s Pan American Health Organization (PAHO)/World Health Organization (WHO) Collaborating Center, including serving on planning committees and giving lectures at several international leadership conferences. At the university level, Dawson is a member of the UAB African American Faculty Association.

She also has served on the AONE national and international diversity committees and is the president-elect of the Alabama Organization of Nurses Executives (AlaONE). She will take office as AlaONE president in January 2018.

“I believe that receiving the Prism Award wasn’t just for my diversity service to AONE alone, but for what I have done at the state, regional, national and international levels throughout my career,” Dawson said. “It was about what I have done for diversity in general, and the impact I have had in that area. It is very fulfilling to know that my colleagues here at the School, throughout the state and at AONE agree.”