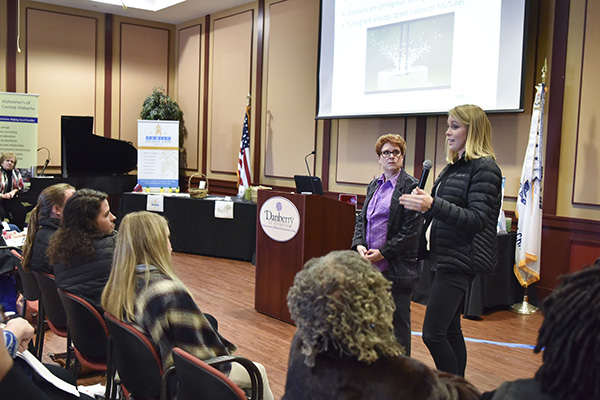 Dr. Rita Jablonski, left, and UAB School of Nursing undergraduate student Karissa Krause engage an interested audience of caregivers, directors of nursing and other team members from nursing homes and assisted-living facilities during one session of the recent Dementia Boot Camp.
Each of the four has had a family member touched by Alzheimer’s disease or dementia, and being able to observe and interact with Jablonski-Jaudon at the School, and see firsthand the impact of Jablonski’s work in the community, has had a profound effect on them as nursing students.

“She has planted a seed,” said Krause, a senior from Calera, Alabama. “I’ve always thought I wanted to work in cardiac intensive care and then go to nurse anesthesia school, and I never thought I would ever do research. But watching her in the clinic has inspired me to think about changing my whole specialty track, getting my PhD and doing research into dementia.”

The four students recently joined Jablonski as she presented “Dementia Boot Camp: Getting to the Heart of the Behaviors” in conjunction with the Alabama Coalition for Cultural Change.

Held at the Danbury at Inverness Retirement Community in Hoover, Alabama, the event drew such a response from caregivers and administrators, directors of nursing, and other team members from nursing homes and assisted-living facilities, that Jablonski had to schedule a second date to accommodate the overflow. In all, approximately 240 attendees over the two days listened as Jablonski shared her expertise and insights with an air of confidence and a touch of self-deprecating humor that helped them relate to her easily.

That air of confidence is well earned. Jablonski's body of work includes a four-year, $1.4 million R01 Grant from the National Institute of Nursing Research (NINR) to study reducing care-resistant behaviors during oral hygiene in persons with dementia, and a three-year, $734,955 project for the Department of Defense to improve caregiver burden, quality of life and related outcomes for patients with Alzheimer’s or Traumatic Brain Injury, and their family members, through the use of face-to-face coaching via the internet.

And Jablonski's work has the potential to impact millions. 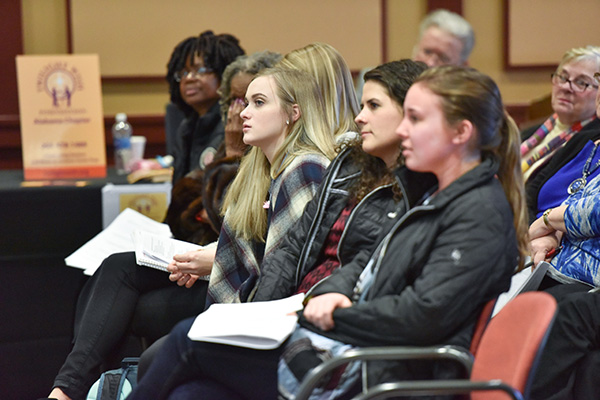 From right to left, Hannah McClellan, Melanie Edwards and Cecily Buchanan listen intently as Dr. Rita Jablonski shares her insights and expertise on dementia, Alzheimer's and other aspects of aging in America.She cites statistics from the Alzheimer’s Association that 5.3 million Americans currently have the disease, more than the populations of New Hampshire and Iowa combined. The cost of caring for those with Alzheimer’s and other dementias is expected to total $259 billion in 2017, and nearly one in every three U.S. seniors who die each year has some form of Alzheimer’s or dementia.

It is a situation Jablonski describes as a “tsunami upon us” and one for which clinicians such as herself will need all the help they can get from future nurse leaders like those being trained at the School.

“I feel like a lifeguard at a lake where lots of people are drowning,” Jablonski said. “As fast as I pull one out, a hundred more jump in and start to drown as well. But I am excited because I now have students that I hope will become clinicians and researchers in their own right so it won’t feel like it is just me standing on the bank trying to stem the tide.”

Participating in Dementia Boot Camp was a good practical lesson for the students to learn.

“She speaks to people, she doesn’t talk at them,” said McClellan, a senior from Libertyville, Illinois. “She puts things in a simplistic way and puts some humor in there which keeps people alert and focused. To get to see firsthand what a researcher and a teacher like her does has been influential for me because it drives my curiosity and desire to potentially do research myself. I think it is a great motivator for my future career aspirations.”

It is these opportunities and more that sets the UAB School of Nursing apart and makes her glad she chose to come here, Edwards said. In addition to participating in events such as the Dementia Boot Camp, the students have also shadowed world-class researchers, been exposed early on to the inner workings of research projects and worked with patients in clinical settings, unique experiences that might not have been available had they gone elsewhere.

"The UAB School of Nursing does a great job of looking at the various aspects of patient care and giving us such a well-rounded education," said Edwards, a senior from Argo, Alabama. "They include us in so many different parts of the process. I really appreciate the knowledge base the UAB School of Nursing has already given me. 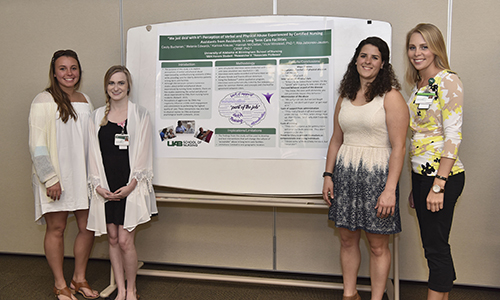 From left to right, Hannah McClellan, Cecily Buchanan, Melanie Edwards and Karissa Krause took second place in the Health Services Category at the recent Spring 2017 UAB Undergraduate Expo with their poster presentation entitled "Perceptions of Verbal and Physical Abuse Experienced by Certified Nursing Assistants from Residents in Long-Term Care Facilities.'"I feel sure that when we enter our careers full-time we will not be scared to do our jobs, and we will feel very confident."

Jablonski is proud that the students feel she and the School are giving them the most realistic experiences possible to prepare them for their nursing careers.

"I do believe that what we offer our undergraduates and the access they have to me as a senior researcher is unique," Jablonski said. "They didn't just get that at the Dementia Boot Camp, either. I have them follow me and my team in all different venues so they can see a cross-section of Alzheimer's research literally from bench to bedside, and that is rare."

It is the kind of background and training the students believe they will need if they are to help calm this growing tempest.

"Dementia is such a common disease that people don't really talk about it, and there is a real gap in education, especially for caregivers," said Buchanan, a senior from Guntersville, Alabama. "Dr. Jablonski really breaks it down to a level we can understand, and being able to relate to and understand our patients and getting on their level will be very helpful in the future.

"I had options for other schools I could have gone to, but there have been many doors opened to me here that I don't think would have been if I had gone somewhere else. Here they don't just train us to be nurses, they train us to be the best nurses we can possibly be."
Read 8674 times Last modified on July 14, 2021
Tweet
Tagged under