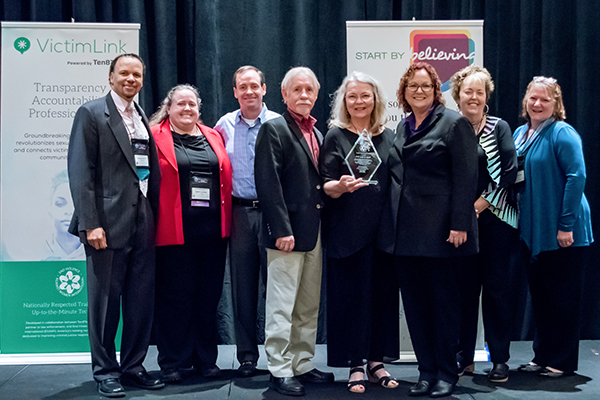 Speck is the first nurse to receive the honor, which was presented in Orlando, Florida, on April 18, at the International Conference on Sexual Assault, Domestic Violence and Systems Change, an interprofessional meeting attended by more than 2,000 people representing 12 countries.

The Professional Impact Award recognizes professionals whose work significantly influences their community’s response to violence against women. It acknowledges their passionate engagement, heartfelt commitment, and tireless dedication to the cause of ending violence against women. Speck’s award etching states, “…for your life-long dedication to public health and forensic nursing, constantly raising the bar for research, practice, evaluation, and teaching. Your work enriches knowledge and inspires action, stirring others to bring both heart and mind to the service of victims.”

In honoring Speck, EVAWI noted, “her broad-ranging expertise covers areas as diverse as public health and forensic nursing, policy and curriculum development, research and program evaluation. Dr. Speck’s research focuses on the relationship between victimization and health and the evaluation of system-wide therapeutic interventions to improve victim recovery. She also consults nationally and internationally to implement and evaluate systems change in the interprofessional response to victims of violence and to remedy health disparities in locally, nationally, and in Africa, Eurasia, Caribbean, and the Americas.”

EVAWI also saluted Speck as a dedicated professional who works with other professionals in her community, collaborating interprofessionally to create lasting systemic change. The award presentation noted, “because of [her] work, victims in their communities are more likely to receive the compassionate support and competent services they deserve, and perpetrators are more likely to be held accountable for their crimes.”

Speck also presented her funded research in a breakout session at the International Conference on Sexual Assault, Domestic Violence, and Systems Change entitled, “What YOU Need to Know! DNA Findings After Sexual Assault,” which was a collaboration with former UAB School of Nursing and current Rutgers University doctoral student Rosario Sanchez, MSN, and two colleagues from the University of Central Florida.

To view a biographical video of Speck’s work and career that was shown as part of the EVAWI award presentation, click here.
Read 7396 times Last modified on March 22, 2019
Tweet
Tagged under