Recent additions bring to 33 the number of faculty, alumni who hold this designation
By Staff

Four faculty members and three alumni of the University of Alabama at Birmingham (UAB) School of Nursing have been inducted as Fellows of the American Association of Nurse Practitioners (AANP), bringing to 33 the number from the School who have achieved this prestigious designation.

The induction ceremony was held during the AANP National Conference in Philadelphia, Pennsylvania, June 20-25. 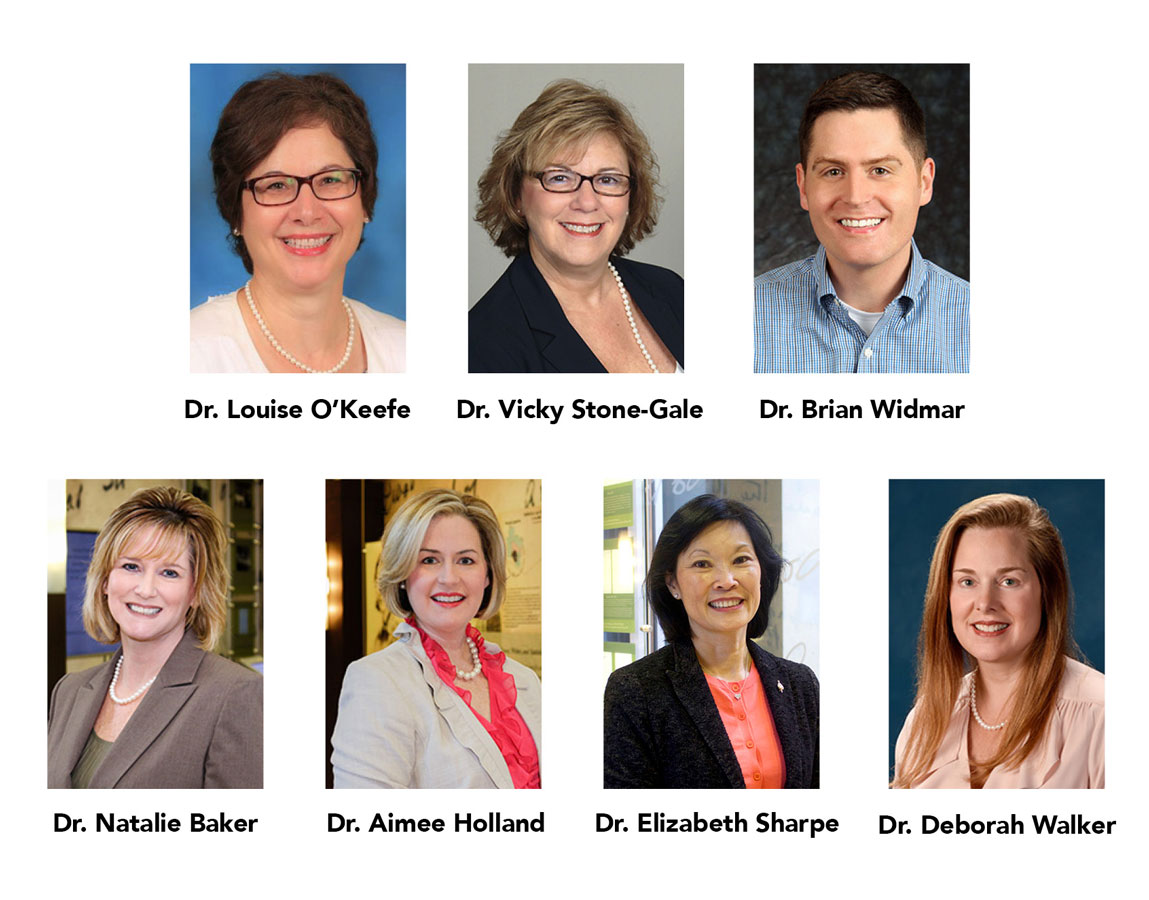 Natalie Baker
Dr. Baker is recognized for her expertise in the field of gerontology. The National Hartford Center of Gerontological Nursing Excellence has appointed her to an expert panel responsible for development of Gerontological Nurse Educator Competencies. She has also previously served as Education Committee Chair for the Gerontological Advanced Practice Nurses Association and is currently serving as its Board secretary. She received gubernatorial appointment to the Alabama Board of Nursing as the advanced practice nurse representative (2015-2018). Baker is the 2016 recipient of the AANP Advocate State Award of Excellence and maintains an NP practice at a local nursing home.

Elizabeth L. Sharpe
Dr. Sharpe is a neonatal nurse practitioner and vascular access specialist whose unique contributions focus on neonatal and pediatric vascular access, harm prevention and advanced practice nursing and interprofessional education. She currently teaches in the School’s Neonatal NP Program and serves on the DNP Core Faculty. She is the coauthor of the Guideline for Practice: Neonatal Peripherally Inserted Central Catheters, 3rd Edition, published through the National Association of Neonatal Nurses (NANN) in 2015, and a respected resource globally. Sharpe was recently reelected to the NANN Board of Directors, and has served on the Pediatric Advisory Group of the Association for Vascular Access (AVA) and the Vascular Access Certification Corporation Board. Sharpe was named the first Janet Pettit Scholar by the AVA in 2014.

Deborah Kirk Walker
Dr. Walker is Director of Subspecialty Course Options in the School’s Master of Science in Nursing (MSN) Program. She developed and coordinates the Oncology Nursing Practitioner Subspecialty course series. She has practiced for more than 18 years as an oncology nurse practitioner and is currently managing patients with breast cancer and lymphoma at the UAB Comprehensive Care Center at Kirklin Clinic. Her life’s work is expanding cancer/palliative nursing education at home and in parts of sub-Saharan Africa. She also developed and expanded a mobile application “Cancer Resources in Alabama” to provide community resources information locally and statewide. She is the immediate past president of the Oncology Nursing Society Foundation (2016-17). Her recent awards include the 2015-16 American Association of Colleges of Nursing Excellence and Innovation in Teaching and the 2016 American Cancer Society Lane Adams Quality of Life Award.

Louise O’Keefe
Dr. O'Keefe is Director of the Faculty and Staff Clinic on the campus of The University of Alabama in Huntsville (UAH), which she established and manages. Under her direction, the clinic has expanded to include not only episodic care but also preventive care such as screening for cervical and colorectal cancer. She serves on the faculty of the UAH College of Nursing, teaching in the family nurse practitioner program. She mentors honors, theses and doctoral students. In 2014, Dr. O'Keefe was awarded the AANP State Award for Excellence in Clinical Practice. She earned her PhD from the School in 2013.

Vicky Stone-Gale
Dr. Stone-Gale is an Assistant Professor at Frontier Nursing University and practices in primary care in Plantation, Florida. She is the founding member and President of the South Florida Council of Advanced Practice Nurses, past member of the Florida Nurses Association Board of Directors, past Chair of the Florida Board of Nursing (BON) and is currently an appointed member of the Florida BON Controlled Substance Formulary Committee. She was also instrumental in the passage of the Barbara Lumpkin Controlled Substance bill giving Florida nurse practitioners controlled substance privileges. She is the recipient of numerous awards including Broward County Nurse of the Year and Nurse Practitioner of the Year on many occasions. She earned her DNP from the School in 2011 and was named Doctoral Student of the Year.

Brian Widmar
Dr. Widmar is an Assistant Professor at Vanderbilt University School of Nursing and the Director of the Adult-Gerontology Acute Care Nurse Practitioner Program. He is a certified acute care nurse practitioner with a clinical background in cardiothoracic critical care and expertise in the care management of patients with advanced heart failure, cardiothoracic transplantation and mechanical circulatory support device therapy. His research interests and publications include patient and family-centered care and self-care education in cardiothoracic transplant and ventricular assist device patient populations. He earned his BSN from the School in 2003 and his MSN in 2005.

The AANP is the largest full-service national professional membership organization for nurse practitioners of all specialties. The Fellows of the AANP was established in 2000 to recognize nurse practitioner leaders who have made outstanding contributions to health care through their clinical practice, research, education or policy and to provide a forum to extend and enhance such efforts.
Read 7170 times Last modified on March 22, 2019
Tweet
Tagged under