Department chair, professor recognized as "a master teacher of nurses"
By Staff

University of Alabama at Birmingham School of Nursing Chair of the Department of Family, Community and Health Systems and Professor Teena McGuinness, PhD, CRNP, PMHNP-BC, FAAN, has received the Old Dominion University School of Nursing Monarch Milestone Award for Teaching, recognizing her as “a master teacher of nurses.”

McGuinness, who earned her Bachelor of Science in Nursing (BSN) from ODU in 1978, was recently presented the award along with winners in six other categories as part of a special recognition dinner marking the 50th anniversary of the ODU School of Nursing. 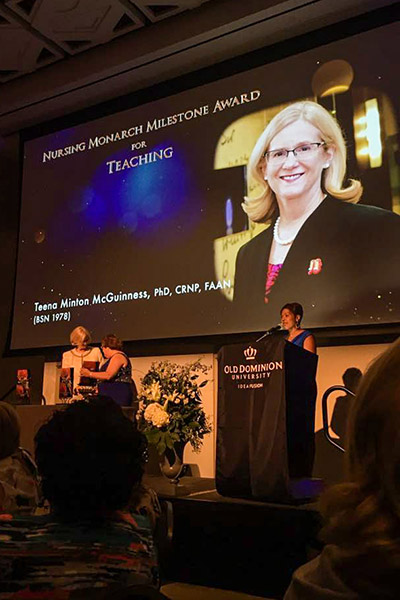 Dr. Teena McGuinness receiving her Monarch Milestone Award for Teaching as part of the Old Dominion School of Nursing's 50th anniversary celebration.The award goes to an ODU alumnus whose enthusiasm and dedication to educating the next generation of nurses is evident in the delivery of course content, student feedback, innovative use of instructional technology, peer evaluation of educational effectiveness and their commitment to inspiring lifelong learning.

McGuinness called the award “validation” of a long, successful career.

“I was honored to be recognized as a distinguished ODU School of Nursing alumna and a representative of the UAB School of Nursing,” McGuinness said. “It is encouraging because years ago I knew I was going down a good path when I decided to become a nurse educator, and this award tells me I’m still on that good path.”

McGuinness credited her development as a teacher, in great part, to her time at the UAB School of Nursing, which holds the highest overall national ranking in the state and is the most affordable highly ranked school nationally.

“There are many wonderful resources here to help you develop as a teacher,” McGuinness said. “Our partnerships make us better teachers because we see what is happening in the real world. There are no ivory towers here. We’re about real people and truly improving health care for Alabama’s citizens and beyond, and what a privilege that is. We have great teaching mentors here. I have had many opportunities in the School and across UAB that have helped me become a better teacher, and I am thankful for all of them.”

McGuinness, who also is co-director of the School’s Mental Health Nurse Practitioner Residency -- a joint program between the School and the Birmingham VA Medical Center (BVAMC) as part of the Veterans Affairs Nursing Academic Partnership in Graduate Education (VANAP-GE) since 2013 -- participated in a panel discussion with the other Monarch Milestone Awards recipients offering advice to new nursing graduates. She also was able to share information about the UAB School of Nursing’s keen focus on Veteran-centric health care with a large number of U.S. military Veterans among the ODU School of Nursing student population.

“Because of the large military presence in the area, the ODU School of Nursing is a mecca for the training of Veterans, and that is close to my heart,” McGuinness said. “It was very meaningful and touching to me to see all the Veterans they have in student leadership roles there, just as we do here at the UAB School of Nursing.

“It was a wonderful experience for me to see how the school has evolved and grown over the years. The growth and success they have had in so many areas have been, and will continue to be, very inspiring to me in my work here.”

McGuinness, who has been a professor in the School since 2007 and guided the Department of Family, Community and Health Systems since 2013, previously received the UAB President’s Award for Excellence in Teaching in 2012.
Read 5433 times Last modified on March 22, 2019
Tweet
Tagged under