University of Alabama at Birmingham (UAB) Professor Anne Turner-Henson, PhD, RN, FAAN, is one of 12 faculty honored with the 2017 President’s Award for Excellence in Teaching at the recent UAB Faculty Convocation. 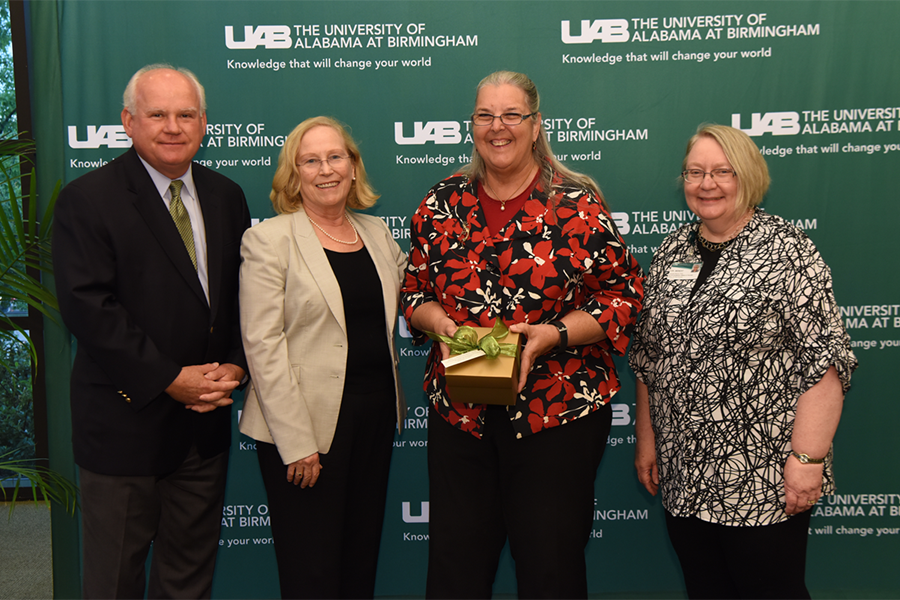 UAB President Dr. Ray Watts, left, Dean Doreen C. Harper and Provost Pam Benoit were among those who honored Professor Anne Turner-Henson as one of 12 faculty to receive a 2017 President's Award for Excellence in Teaching at this year's Faculty Convocation. Turner-Henson, who has been on faculty in the UAB School of Nursing since 1982, was characterized as someone who embodies excellence in teaching through her knowledge of subject matter, her concern for students, and her ability to motivate, inspire and lead by example. In presenting the award, UAB President Ray Watts, MD, noted Turner-Henson’s 35-year career at UAB, her extensive expertise in child health, environmental health and community nursing and her impact on many students.

“Dr. Turner-Henson is constantly engaging students in collaborative research and service,” Watts said. “Her students love her and acknowledge her as a mentor who motivates them to always reach for excellence.”

Turner-Henson, who earned her Doctor of Philosophy in Nursing (PhD) from the School in 1992, said it was humbling to be nominated, and she was particularly overwhelmed by several letters submitted by former students supporting her nomination.

“I always like to challenge my students,” Turner-Henson said. “I always like to do things that are out of the box because innovation is the future of our profession. So, to be recognized by my students -- and my colleagues -- in this way is a great honor.”

Turner-Henson’s program of research in children’s and environmental health concerns has often been from the perspective of respiratory health, specifically focusing on second-hand smoke exposure, asthma and parental caregiving. She also has extensive experience in interdisciplinary research in community-based settings and in community participatory research.

She has served on the Environmental Protection Agency’s (EPA) Children’s Health Protection Advisory Committee and on the Toxic Stress and Middle Childhood Groups updating Bright Futures, the national health promotion guidelines for children published by the American Academy of Pediatrics. In 2016, the EPA recognized her as a Children’s Environmental Health Hero in its Region 4, which covers the Southeast.

Turner-Henson has done extensive work with the Jefferson County Committee for Economic Opportunity (JCCEO) Head Start Program, which provides services to more than 1,500 children ages 3 to 5, and their families, in the Birmingham, Alabama, area.

“Working to promote healthy environments ensures that our children can grow up healthy and safe, from an environmental perspective,” Turner-Henson said.

Turner-Henson received The Leadership in Research Award from the Southern Nursing Research Society in 2014 and currently serves in a leadership role both on campus and statewide with the Alabama Maternal and Child Health Leadership Network. She also teaches at the graduate and undergraduate levels in the School, which holds the highest overall ranking in the state and is the most affordable highly ranked school of nursing nationally, and serves as a mentor to PhD students in nursing and other fields.

“I teach to help the students learn and appreciate what nursing is,” Turner-Henson said. “Nursing is a field you can do anything in if you set your mind to it, and that is the attitude I hope to always instill in my students.”

The UAB School of Nursing is ranked 13th in overall graduate programs, among the top five public schools of nursing in the country by U.S. News and World Report, and offers innovative bachelor's, master's, and doctoral programs, including the state’s only PhD in Nursing degree and a DNP degree offering BSN, MSN and Nurse Anesthesia Pathways; more than 10 specialty nurse practitioner tracks, advanced nursing executive majors in administration and informatics, and an Accelerated Master's in Nursing Pathway (AMNP) for students who already have one degree.