The University of Alabama at Birmingham (UAB) School of Nursing has named Patricia A. Patrician, PhD, RN, FAAN, the second holder of the School’s Rachel Z. Booth Endowed Chair in Nursing.

Patrician is nationally recognized for her expertise and leadership in the areas of patient safety, quality care and nursing practice environments and has an on-going program of funded research focused on improving those areas within our nation’s military hospitals. Since joining the UAB School of Nursing faculty, she has sustained a record of extramural funding of $2.5 million as a principal investigator and has served as co-investigator on an additional 11 grants from TriService Nursing Research Program, Agency for Healthcare Research and Quality, Robert Wood Johnson Foundation and the VA Health Services Research and Development Program.

The Booth Endowed Chair was named in honor of Rachel Z. Booth, PhD, the School’s third dean, upon her retirement in 2005. 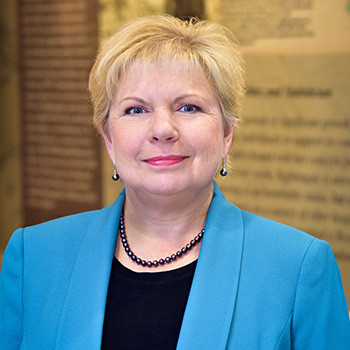 Dr. Pat Patrician“Pat Patrician exemplifies all of the requirements for the Rachel Z. Booth Endowed Chair, including a distinguished record of external funding, evidence of research and scholarly achievement, consistent record of publication, experience in mentoring, exemplary professional and academic citizenship, documentation of outstanding teaching performance and national professional recognition,” said Doreen C. Harper, PhD, RN, FAAN, Dean and Fay B. Ireland Endowed Chair in Nursing. “Our School is fortunate to have an individual with Pat’s experience and abilities as a faculty member and researcher, and we are thrilled she has been named the second holder of the Rachel Z. Booth Endowed Chair in Nursing.”

Patrician, a retired United States Army Colonel and 26-year veteran of the U.S. Army Nurse Corps, recently received a two-year, $400,000 award from the TriService Nursing Research Program for her study “Impact of Nursing on Readmissions, Failure to Rescue & Mortality in DoD Hospitals.” She is one of two senior scholars for the VA National Quality Scholars Program at the Birmingham VA Medical Center (BVAMC) and one of only six people nationwide to serve on the Strategic Advisory Panel of the national Quality and Safety Education for Nurses (QSEN) Institute.

After earning her doctorate, Patrician served as Chief, Nursing Research Services at Walter Reed Army Medical Center and then as Chief, Department of Nursing Science and Consultant to the Surgeon General for Nursing Education and Enlisted Training at the Academy of Health Sciences at Fort Sam Houston, prior to joining the UAB School of Nursing in 2008 as Associate Professor of Nursing and holder of the Donna Brown Banton Endowed Professorship. She was promoted to Professor with tenure in 2013.

Throughout her career, Patrician has received numerous honors and awards from professional organizations such as Academy Health, Academy for Healthcare Improvement, Army Medical Department Center & School, Association of Military Surgeons of the U.S., U.S. Army Medical Command and Walter Reed Army Medical Center. She also is a Fellow in the American Academy of Nursing (AAN), and one of fewer than 2,000 nurses admitted as a Fellow from among the nearly 3 million eligible.

Senior Associate Dean for Academic Affairs and Professor Linda Moneyham, PhD, RN, FAAN, was the first holder of the Rachel Z. Booth Endowed Chair in Nursing from 2007 to 2011.

“Dr. Patrician is a nationally recognized expert in nursing quality and safety and will continue to be a tremendous asset to the School in this new role,” Moneyham said. “I am confident she will utilize the Booth Endowed Chair of Nursing to its fullest extent to impact the mentoring of young researchers, advance knowledge development and initiate continued improvement in health care.”

Patrician is pleased that her life’s work has been recognized with this appointment.

“It is a dream come true to be named to this prestigious post that honors one of our pioneers and an architect of one of the nation’s top nursing schools,” Patrician said. “I have been engaged in the quality and safety aspects of nursing for a large part of my career. I will rely heavily on that background as I strive to maintain the high standards Dr. Booth set for us.”
Read 4975 times Last modified on September 27, 2019
Tweet
Tagged under