Percentage of male faculty, students continues to rise
By Staff

The University of Alabama at Birmingham (UAB) School of Nursing leads the way nationally in breaking through the gender perceptions of the nursing profession, continually exceeding the national average of both male students and faculty in the School.

“The UAB School of Nursing is extremely committed to excellence in the area of gender diversity as we build on our vision to sustain nursing leadership worldwide,” said Dean and Fay B. Ireland Endowed Chair in Nursing Doreen C. Harper, PhD, RN, FAAN. “We are proud of the success we have had in increasing the number of men on our faculty and in our student ranks. We will continue to make this an area of emphasis in our efforts to meet the greatly intensifying challenges and demands of the health care profession.”

For the Fall 2017 semester, total male enrollment in the School was 14.5 percent, and male admissions in undergraduate programs – the traditional Bachelor of Science in Nursing (BSN) program and an RN-Mobility: Registered Nurse to BSN program – were at 17 percent, well above the national average of 12.5 percent. Enrollment in the Post-BSN to Doctor of Nursing Practice (DNP) Pathway for Nurse Anesthesia, traditionally a frequent choice of male students, was highest in the School at 48 percent.

Males also account for 16.9 percent of the School’s 136 full-time faculty. This includes six men in leadership roles among its various programs, pathways, specialty tracks and subspecialties.

These numbers far exceed national statistics. The Henry J. Kaiser Family Foundation estimates that as of October 2017, there were more than 3.3 million registered nurses, and of those, a 2016 study by the Center of Interdisciplinary Health Workforce Studies at the Montana State University College of Nursing puts the number of male registered nurses in the country at just more than 350,000. The American Association of Colleges of Nursing (AACN) says that men make up just 7 percent of full-time nursing faculty nationwide.

“The inherent assumption has been that this is a female profession, but as time has gone on, we have seen more and more men move into nursing. Now there is definitely a feeling of ‘I belong here, too,’” said Assistant Professor Edwin Aroke, PhD, MSN, CRNA, faculty in the Post-BSN to DNP Nurse Anesthesia Pathway.

PERCEPTIONS HAVE EVOLVED
Aroke relates an experience from his undergraduate nursing student days that puts into perspective the strides that have been made. He recalls that when his nursing instructor wanted to examine a female patient during his obstetrics rotation, he was told to leave the room.

“That is counterintuitive to training a nurse. You cannot train someone to be a nurse while telling them to leave the room,” Aroke said. “Now that gear has shifted. Patients, doctors and providers have come to accept that there are more males in nursing and are much more comfortable today.”

Aroke believes another contributing factor to the evolving trend is the presence of more male role models working in the profession and teaching in the nation’s nursing schools.

“When I did my undergrad, we had no males on the faculty,” Aroke said. “In graduate school, there were two males on faculty. Now here at the UAB School of Nursing there are many, many more. Once you have gender neutrality and you have role models, people are more inspired to enter the field.”

EYE-OPENING NEONATAL NUMBERS
Associate Professor Cheryl Robinson, DNS, CRNP/Faculty, NNP-BC, coordinator of the School’s Master of Science in Nursing (MSN) Neonatal Nurse Practitioner Specialty Track, has taught neonatal nurse practitioner courses since 1994 and in all that time she has never seen anything like she is experiencing with her current Advanced Neonatal Nursing class. 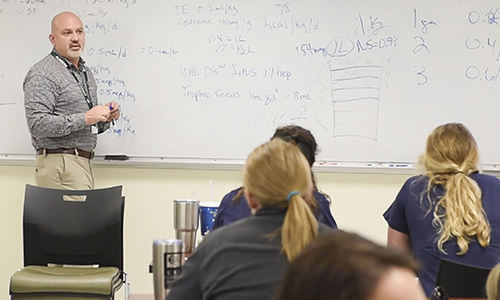 Assistant Professor Curry Bordelon is having an impact in the School's Master of Science in Nursing (MSN) Neonatal Nurse Practitioner Specialty Track, which currently has four male students in the ranks of its class that will graduate in August 2018.“In 23 years, I have only graduated six men,” Robinson said. “In the neonatal class that will graduate in August 2018, I have four male students. I am thrilled that we have so many men now coming into graduate school to become neonatal nurse practitioners. Each individual brings their own perspective into nursing and each of these students offers a unique take, as men, you don’t often see in neonatal nursing”

The National Certification Corporation estimates there are approximately 5,600 certified neonatal NPs practicing in the U.S., and ENSEARCH Management Consultants, a national job placement service for neonatal NPs, estimates that only 235 of those are men.

Robinson said the School’s focus on diversity in hiring more male faculty members as role models has played a key role in the increase. These include Assistant Professor Curry Bordelon, III, DNP, MBA, NNP-BC, CPNP-AC, a neonatal NP faculty member who earned his Doctor of Nursing Practice (DNP) from the School in 2016.

“Having a strong male faculty member has helped us,” Robinson said. “It is something the student can look at and say, ‘I can do that, too.’”

The School is ranked 13th in overall graduate programs and among the top five public schools of nursing in the country by the magazine.

“Many high school students in the country look at lists of top 10 jobs nationally, and nursing is consistently one of those professions,” Tofani said. “I think that feeds into the diversity of numbers we are getting among our applicants. Society, upbringing and many other factors go into where students go to pursue their education, but at the UAB School of Nursing, we try to facilitate all those that are interested in having that opportunity here.”

CHANGING TIMES
As a teenager in Selma, Alabama, in the late 1970s, Assistant Professor Richard Taylor, DNP, CRNP, ANP-BC, volunteered at a local nursing home and the local hospital. There he met several “very intelligent, strong” nurses who encouraged him in work that he enjoyed.

“My experience working in the nursing home and the hospital was so positive,” said Taylor, who earned his BSN from the School in 1985, a post-Master’s Adult Nurse Practitioner certificate in 1999, his DNP in 2010 and is currently enrolled in the Doctor of Philosophy in Nursing (PhD) program.

There were three other male students in Taylor’s class, he said, but no male faculty. When he graduated and went to work on the cardiology unit at UAB Hospital, he was the only male nurse on his shift.

“We have come light years from where we were,” Taylor added.

In addition to more role models, Taylor credits more favorable portrayals of male nurses in commercials, TV shows and movies as helping to change perceptions in general. He also feels that more men are realizing how good a fit nursing is for them specifically in terms of salary, career longevity and job flexibility.

“Basically, whatever you want to do with a nursing degree you can do,” Taylor said, who is co-director of the School’s MSN Advanced Palliative Care and Oncology subspecialties and faculty chair and mentor for DNP students. 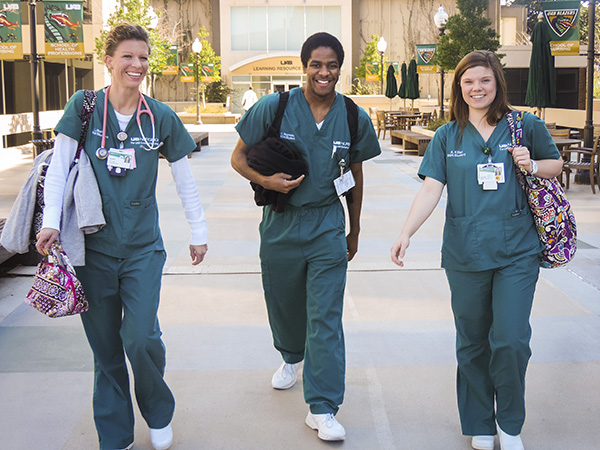 With the need for nurses continuing to grow in the coming years, the trend of men stepping into the role to help fill the need is expected to continue to grow as well.He and his fellow male faculty are also well aware of the responsibility they now bear, Taylor said. “Our male faculty members make a conscious effort to go out and say, ‘Have you thought about nursing school?’” Taylor said. “We do that because we would like to see more males in nursing and certainly in nursing faculty. We encourage more male students to come here and let them know they will be extremely welcome if they do.”

TREND WILL CONTINUE
Aroke recalls other times when, as a PhD student, he was asked to attend science, technology, engineering and math (STEM) events to talk about nursing with high school students. It proved to be eye-opening for him and for some young men who had not previously considered nursing as a possible career choice.

“At the end of an event you would always have one or two say, ‘that was the best thing I could have heard,’” Aroke said. “They would think of themselves as engineers or doctors but didn’t know a man could be a nurse, and I would say ‘I am one.’ Seeing someone who was a male nurse, who was living it and succeeding, really encouraged them.”

He only sees that trend continuing.

“Now that the word is out that it’s OK to be male and be a nurse, I think the trend is definitely going to increase,” Aroke said. “The population is getting older so there is a greater need for nurses, and more men are going to step into that role and help fill that need.”
Read 4304 times Last modified on September 30, 2019
Tweet
Tagged under