Prestigious designation awarded to three alumni and one faculty 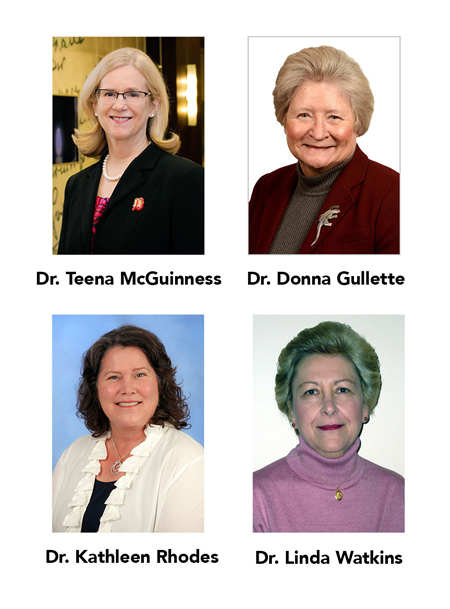 Three alumni and one faculty member of the University of Alabama at Birmingham School of Nursing have been inducted as Fellows of the American Association of Nurse Practitioners (AANP), bringing to 37 the number from the School who have achieved this prestigious designation.

The induction ceremony and dinner were held June 28, 2018 during the AANP National Conference in Denver, Colorado.

Gullette, who earned her Doctor of Philosophy in Nursing (PhD) from the UAB School of Nursing in 1998, is dean for practice and professor at the University of Arkansas for Medical Sciences. She has authored or co-authored several peer-reviewed articles and abstracts and lectured nationally. Her research interests center on topics pertaining to the reduction of sexual risk behaviors among rural African-American cocaine users, and the alcohol use and HIV risk behaviors of college students.

Rhodes is Director of Student Health Services and practices as a family nurse practitioner at the University of Alabama in Huntsville’s Student Health Center. She has served as the Alabama State Representative for AANP since 2014 and was appointed to serve on the Alabama Board of Nursing’s Joint Committee for Advanced Practice Nursing in 2017. Rhodes earned her Bachelor of Science in Nursing (BSN) from the UAB School of Nursing in 1982.

Watkins works as a nurse practitioner at GV (Sonny) Montgomery Veteran’s Affairs (VA) Medical Center in Jackson, Mississippi. She has served four elected terms as an AANP State Representative. Watkins earned her Doctor of Nursing Practice (DNP) from the UAB School of Nursing in 2012, and her capstone project was a patient safety and continuity of care project that was implemented in the Jackson, Mississippi VA system that is still in use today.

McGuinness joined UAB School of Nursing faculty in 2007. Her research interests focus on vulnerable youth who have been internationally adopted from orphanages, and she has also studied risk and protective factors for children in U.S. foster care. She has chaired the Department of Family, Community and Health Systems since 2013 and co-directs the Mental Health Nurse Practitioner Residency, a joint program between the Birmingham VA Medical Center and the UAB School of Nursing.