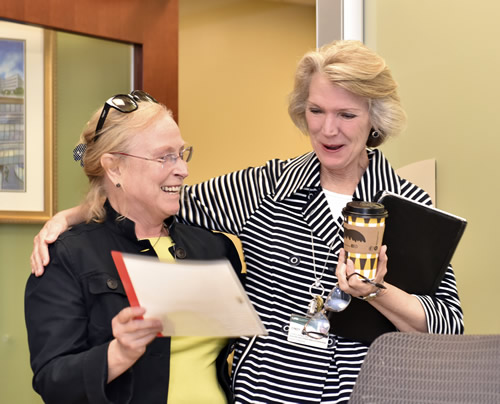 University of Alabama at Birmingham School of Nursing Professor and Associate Dean for Clinical and Global Partnerships, Cynthia Selleck, PhD, RN, FAAN, is the 2018 recipient of the Odessa Woolfolk Community Service Award, which was established in 2008 as a way to recognize UAB faculty that have served the Birmingham community.

Selleck is the first recipient from the School of Nursing in the award’s 11-year history.

“I don’t know everyone who was involved in this nomination, but I want to thank them for thinking I’m worthy of an award like this,” Selleck said. “It’s certainly not just about me, but it’s about the work that teams of us have done and will continue to do. I’m appreciative of this award, and I’m glad that the School of Nursing will be recognized in this way.”

In their letter of nomination for the award, Doreen Harper, Ph.D., Dean and Fay B. Ireland Endowed Chair in the UAB School of Nursing, and Maria Shirey, PhD, RN, FAAN, professor and Acute, Chronic and Continuing Care Department Chair, highlighted Selleck’s dedication to giving back even outside of her position at the School of Nursing.

“Dr. Selleck has provided outstanding service through her partnership development to the Birmingham Community. Her extraordinary work as a collaborator, humanitarian and activist to improve health care for the poor and underserved in Birmingham and Alabama has garnered the attention of the University, community organizers, foundations and public health leaders,” Harper said.

Several community members recommended Selleck for the award, citing her dedication to providing health care and establishing partnerships to help the area’s most vulnerable citizens as well as her ability to translate research into applications that address serious problems.

“‘It’s the right thing to do’ — I’ve used that as my motto over the last several decades,” Selleck said. “If the tables were turned, we could be in the vulnerable situation that our patients are in; we want to give them the best care possible, from the best providers possible. We want people who are concerned about making patients’ health better and making their lives better.”

Selleck helped establish the Providing Access to Healthcare (PATH) Clinic, which has served more than 10,000 patients since opening in 2011. She also developed the School’s primary care clinic with the Foundry in Bessemer, which has evolved into the The Bessemer Neighborhood Health Clinic in partnership with Cooper Green Mercy Health Services and Aletheia House, a federally qualified health center, and her efforts brought Jefferson County its first Nurse Family Partnership, which supports low-income, first time mothers by providing home visits throughout pregnancy and the child’s first two years of life. 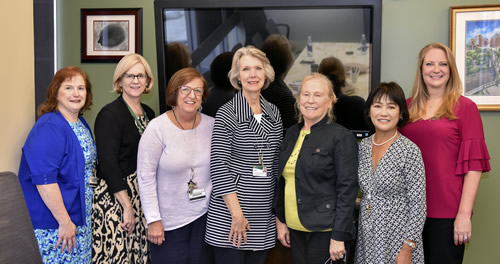 Selleck’s passion to care for underserved populations fueled these programs, and she is happy to see that passion influence others.

“You have to have a heart for doing this kind of work, and health professionals who see the need to help vulnerable populations, you can’t just pick them off a tree,” Selleck said. “I feel like I’ve had a role in instilling that same passion in others. We have a number of faculty who are as excited about caring for these populations as I am. And our faculty are instilling that same desire in students as well”

These efforts and partnerships have always been supported by Dean Harper, who was able to see the benefit of programs, Selleck said. In turn, the programs support the School’s mission of preparing nurse leaders who excel as clinicians, researchers, and educators.

“Our strategic priorities and goals certainly have to do with caring for underserved populations and these programs fit nicely with the School’s vision and values,” Selleck said. “We want to develop innovative leaders who transform health. With the partnership work the school is doing, we have the opportunity to really transform health.”

As Selleck looks toward her December 2018 retirement, she also looks forward to seeing these programs grow and expand.

“I’m going to be sad to leave, but I know there are plenty of people who have picked up the mantle and are going to carry these efforts on, and I feel good about that. Nothing is going to fall to the wayside — it’s just going to continue to grow,” Selleck said. “That’s the best part of this. People are doing good work and can expand things that will impact even more people.”