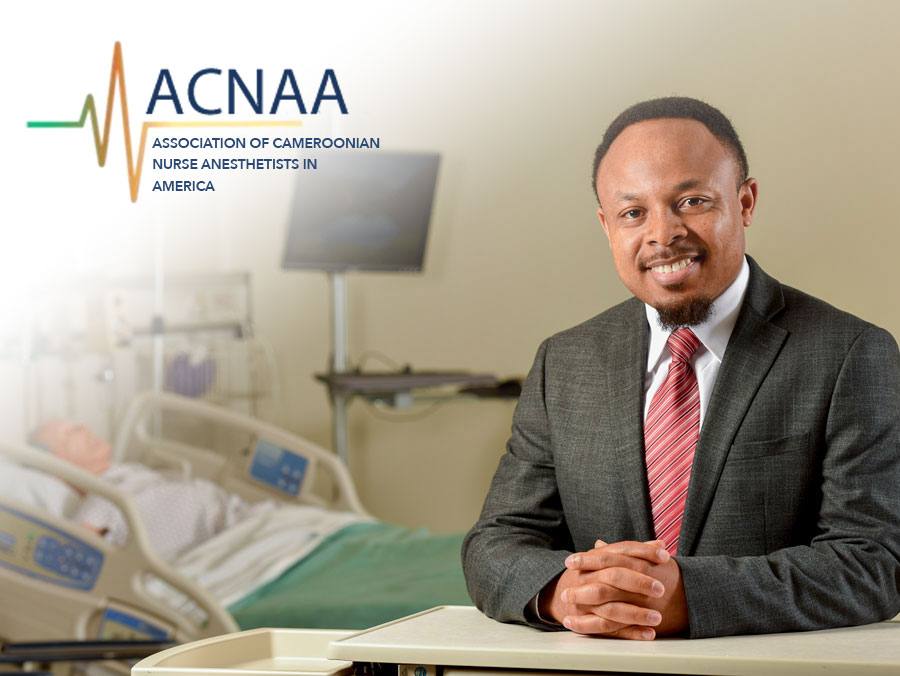 By Erica Techo
University of Alabama at Birmingham School of Nursing Assistant Professor Edwin Aroke, PhD, CRNA, has been elected President of the Association of Cameroonian Nurse Anesthetists in American (ACNAA). He will serve a two-year term in the role, 2021-2023.

Aroke’s goals as president include improving training for nurse anesthetists in Cameroon, developing workshops for education and to create a sustainable revenue source to support ACNAA’s efforts. He also plans to continue actions of donating lightly used equipment when possible. Additionally, he wants to complete a robust benchmarking study of the state of anesthesia care in Cameroon.

For members of ACNAA, he said making a difference is not only their passion, but also part of their tie to Cameroon. As Cameroonian Nurse Anesthetists and former residents, they have a deeper understanding of the country’s needs.

“Part of the challenge in most of the African countries as it relates to mission work and foreign assistance is the expectation that ‘the white person comes in and helps out,’” Aroke said. “But as individuals who still have family in Cameroon and who lived there, we bring more than expert knowledge to the table. It makes a difference to have providers who really understand the politics of the area and the culture and challenges of the people. Being able to relate to each other matters.

“At the end of the day, there is no place like home,” Aroke continued. ”I am an American citizen, but I equally will always have a special attachment to the place where I was born.”

Aroke said became a nurse anesthetist in order to make a difference. As an award-winning educator, CRNA and researcher, he is accomplishing that goal. His program of research looks at pain disparities for minorities in the United States. He also wants to continue to make a difference internationally.

His said this role in ACNAA enables him to impact health care in Cameroon. The tie to his home country is strong, Aroke said, and for members in ACNAA, there is a passion for improving anesthesia care in Cameroon. Gaps in health care provider knowledge is an issue there and that knowledge gap can lead to increased death rates for conditions that can be easy fixes in the U.S.

“Most of us entered nurse anesthesia to make a difference, and most of us still have family back in Cameroon,” he said. “And you get tired of hearing that someone had a hernia, went to the hospital, and died. Or they had an appendicitis and died. If we come together and share our ideas and experience, we can be part of the solution instead of just sitting on the sidelines and criticizing.”