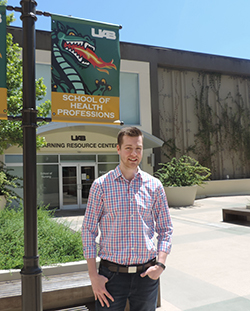 Jeremy Jordan, a master’s student at the University of Alabama at Birmingham (UAB) School of Nursing, has always been fully committed to achieving his goals and aspirations.

Originally from Mobile, Jeremy was never interested in organized sports as a child but his parents wanted him to take part in extracurricular activities. In 2001, his parents enrolled Jeremy in Tae Kwon Do lessons. He loved the structure and technical aspect of martial arts and competed into his high school years, teaching and competing at the regional level. But at 17 a broken leg forced him to stop practicing the sport he loved.

With his Tae Kwon Do practice coming to jarring halt, Jeremy was eager to pursue a new path. During this transitional period he reflected on the aspects of martial arts that he enjoyed -- teaching children and making a positive impact on their lives. Deciding he wanted to continue helping people, Jeremy began looking at colleges and contemplating different careers options.

In 2008 Jeremy enrolled at UAB in the health care management program in the School of Health Professions, earning that degree in 2011. In the fall of 2011, Jeremy decided to enroll in the Accelerated Master’s in Nursing Pathway (AMNP) program in the UAB School of Nursing. He said his love for children and helping others made the transition into nursing a natural path.

Much like his dedication to Tae Kwon Do, Jeremy has been very involved in the UAB School of Nursing. Upon learning there was no longer a graduate equivalent to the undergraduate Student Nurses Association (SNA) he approached Stephanie Hamberger, MPA, director of student evaluations and scholarships, and with her guidance revived the Nursing Graduate Student Association (NGSA).

“Jeremy has been a positive role model from the moment he started the AMNP program,” Hamberger said.  "He jumped at the opportunity to restart the NGSA and has done a spectacular job pulling a new committee together to better serve our graduate students.”

Now in his final semester in the Acute Care Pediatric Nurse Practitioner Program, Jeremy works as a nurse at Children’s of Alabama in the Pediatric Intensive Care Unit and hopes to continue his practice as a nurse practitioner at Children’s after graduation. Jeremy says he plans to use his health-care management background as well as his nursing expertise to help improve health-care reform.

“I want to positively impact people’s lives, both through nursing and through health policy,” he said.