School of Nursing faculty will explore why online teaching tool has been so well received, its future potential
By Jimmy Creed

Thanks to a grant from the University of Alabama at Birmingham (UAB) Center for Teaching and Learning (CTL), an online quiz game called Kaizen — currently the buzz throughout the UAB School of Nursing and beyond — will receive further evaluation as a teaching and research tool.

Instructor Nancy Wingo, PhD, MA, and Assistant Professor Cathy Roche, PhD, RN, who have served as champions of the game in the School since its introduction there in 2014, were thrilled to learn recently that their proposal “Kaizen: An Innovative Team Learning Experience for Nursing Students” would receive a Teaching Innovation and Development Award from the CTL of $4,896.

Named for a Japanese phrase meaning “continuous improvement,” the Web-based gaming platform was developed by James Willig, MD, and a team from the UAB School of Medicine, with support from the Center for Clinical and Translational Science (CCTS).

It presents information vital to a student’s course of study through a series of short, multiple-choice questions that are to be answered quickly and at his or her convenience – similar to any other online trivia game. There is nothing trivial about the impact it has had on the learning environment in the School in short order, however. 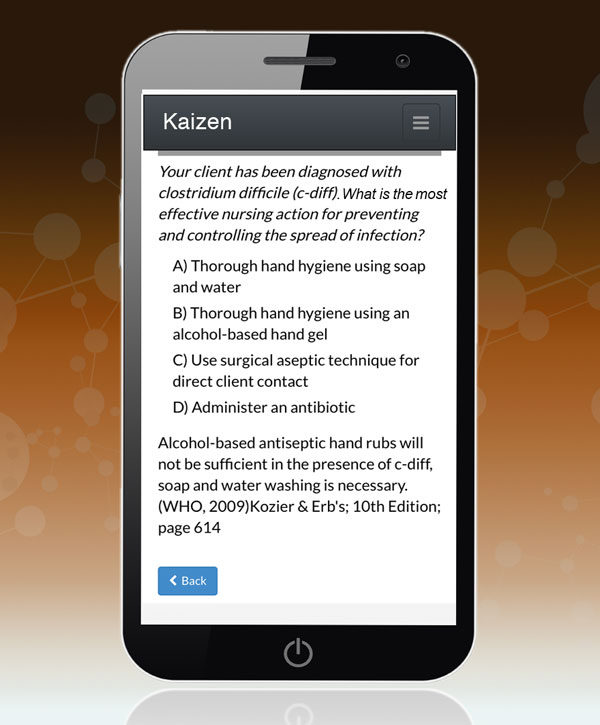 “I went into a lab one day where second-semester students were practicing IVs, and many of them had had played Kaizen in their first semester,” Roche said. “One of the students said to me, ‘Hey Dr. Roche, Kaizen up!’ The young man who said it wasn’t even one of our winners from the last semester, but he was obviously part of the buzz about it being so much fun.”

The mix of education, entertainment and competition seems to be what is making the game so popular. Students compete individually and as teams, there are merit badges – developed by the School’s Senior Instructional Design Specialist Matthew Jennings, MEd, BFA – to be earned for reaching various milestones or achievements and, of course, there is plenty of “smack” talk to be exchanged as each semester and each game builds to its conclusion.

“I see it building such rapport between students and faculty because the students feel like they are becoming more allied with their instructors,” Wingo said. “The instructors say ‘come on, we’ve got to beat the other team’ and they really get into it, too. So it just gives them a different, fun kind of language to share.”

The key to Kaizen is learning, both for the students as they pursue their degrees and for Wingo, Roche and their team as they examine why the game has been so well received and its future potential.

Last year, 432 nursing students at both the graduate and undergraduate levels played Kaizen with many more expected to join in this year. As part of their study, Wingo and Roche plan to conduct focus groups to get feedback from students who have played and those who haven’t.

“We want to try to find out if they perceived that it was helpful to them from an educational standpoint, but we also want to know what they liked about it or didn’t like in terms of the team aspect,” Wingo said. “What was the motivator for them? Were they motivated by getting badges? Were they motivated by peer pressure? By trying to win the game for themselves or for the team? By trying to learn the material?

“It’s also very important that we talk to students who didn’t play to find out what their motivation was as well. We can’t assume that we know why any students are doing things or what they like or don’t like.”

The ultimate goal of this pilot project is to collect data and study outcomes that can be used to make Kaizen a better, broader learning resource for the School and for others who may use it down the road. Wingo and Roche are also proud that the spirit of the game and the grant itself fit nicely with UAB’s recently implemented Quality Enhancement Plan and its emphasis on using teamwork to improve student learning and community service.

“The idea of teamwork runs throughout Kaizen from the teams of students who play to the teams of instructors who work to facilitate the game to the team that created it and keeps working to improve it,” Roche said. “I think that was one of the things that really helped us get this grant and, we hope, will help lead to more funding and more research on it in the future.”

One of Kaizen’s main appeals seems to be that it gives students crucial information they must have in a more relaxed, fun way. Another is that it’s delivered at their fingertips through a medium such as a smartphone or tablet with which they are now extremely familiar.

Wingo calls it an example of the School being student centered, innovative and cutting edge, and Roche agrees.

“It shows that we care as faculty, that we will go the extra mile, and we want our students to succeed because their success is our success,” Roche said. “It shows that we are willing to pull out all the stops to meet them where they are and implement a tool that is fun for them as millennials and for faculty, too. It shows that we will do whatever we can to help them learn to be the best nurses they can possibly be.”
Last modified on February 24, 2016
Tweet
Tagged under