BSN student sees bright side of swimming injury, turns to career in nursing 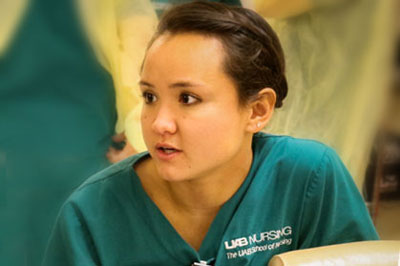 When Angelica Chapman, a former NCAA Division I swimmer, underwent career-ending shoulder surgery, she took what could have been devastating roadblock and refocused on another longtime dream -- becoming a nurse.

This wasn’t the first time Angelica, fifth-semester Bachelor of Science in Nursing student in the University of Alabama at Birmingham (UAB) School of Nursing, had faced hardships. She was diagnosed with acute lymphoblastic leukemia in 1995, at 18 months old, but after treatment went into remission two years later. Although she is too young to recall, her mother recounts fond memories of the nurses who helped their family through the journey to recovery.

Since the diagnosis, Angelica has been afforded unique opportunities to help other leukemia patients. This includes being a camp counselor at Camp Smile-A-Mile, Alabama’s program for children with cancer.

“I’ve had friends who didn’t make it through leukemia. I realize that I am one of the lucky ones,” said Angelica. “I want to use my experience to help inspire hope for those fighting this disease.”

Angelica’s experiences with health care and peer support, she said, naturally led her to a career in nursing. But while swimming at Florida State University, she had to choose between nursing and the sport she loved because of the time-consuming nature of each path. When she was injured, she took it as a sign that nursing was her true calling.

Angelica knew she wanted to earn her BSN. She began looking for a school with a high-caliber nursing program. UAB was a natural choice because she is from Hoover and the nursing program is one of the top-ranked in the country, she said.

Since beginning the program in fall of 2014 Angelica has thrived, and has been able to use her past adversities to become a more understanding nursing student.

“Angelica’s passion is evident in all that she does,” said Assistant Professor Summer Langston, DNP, CRNP, ACNP-BC, AACC. “She is compassionate, exuberant and steadfast, which all translates to her care and interaction with patients.”

In November 2015, she helped welcome Malia McCoy to the School, a 15-year old girl in remission from non-Hodgkin’s lymphoma who dreams of becoming a nurse. Malia spent the day shadowing current nursing students in the simulation lab. Angelica’s positive outlook and empathy made Malia feel welcome and excited to be a part of the action. The two quickly became friends based on shared experiences. Angelica and Malia have kept in touch and they hope to see each other at Camp Smile-A-Mile this summer. 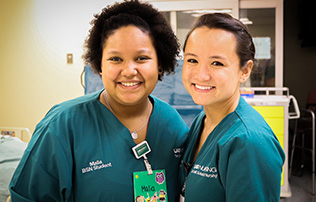 Angelica said her favorite part of the UAB curriculum is the simulation lab experience. In fact, Angelica took the opportunity to go above and beyond and take the Advanced Cardiac Life Support (ACLS) course offered by the School. The two-day intensive course prepares students to respond appropriately and quickly in high-stress critical scenarios.

“ACLS was crucial because it allowed me to practice in a setting where it’s ok to make mistakes,” said Angelica. “Going forward I can learn from those mistakes and ensure the best care for my patients.“

Angelica also is involved in the School of Nursing as a faculty-selected peer tutor and is the Community Service Chair of the Student Nurse’s Association (SNA). She has also collaborated with a number of the School’s community partners on health screening and other events, including East Lake Senior Center, Alpha Kappa Alpha Sorority, Lipscomb Health Clinic, E3 Ministries, The Foundry, the National Kidney Foundation, Project Homeless Connect, Happy Healthy Kids and the McWane Science Center.

Angelica is currently doing her preceptorship as a department floater at Children’s of Alabama and is the recipient of the The Robert Luckie Family Endowed Nursing Scholarship. And, she has already secured a job after graduation in April 2016 – she will be working as an RN in the neonatal intensive care unit at Brookwood Hospital in Birmingham.
Last modified on August 04, 2016
Tweet
Tagged under