The appointment was effective July 1.

They take over the role of leading the School’s largest MSN Specialty Track from Assistant Professor D’Ann Somerall, DNP, CRNP, FNP-BC, who retired August 31. Somerall has been Specialty Track Coordinator since 2012.

“Dr. Somerall has worked tirelessly during her time as FNP Specialty Track Coordinator to build it into one of the finest in the country, and we greatly appreciate her contributions and devotion to excellence,” said Dean and Fay B. Ireland Endowed Chair in Nursing Doreen C. Harper, PhD, RN, FAAN. “Her lasting legacy here will be all the Family Nurse Practitioners she has taught who are now impacting health locally and globally as a result of her efforts. We wish her all the best.” 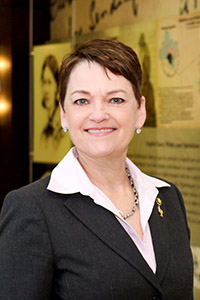 Dr. D'Ann Somerall“I cannot think of two people better suited to carry the FNP Specialty Track to the next level,” Somerall said. “With their creativity and innovation, the FNP Specialty Track is going to be in very good hands with this transition. I am very proud of the legacy I will leave here and feel certain they will inspire our future generations of Family Nurse Practitioners to even greater heights.”

Buys is a two-time graduate of the School who earned her Master of Science in Nursing (MSN) in 2011 and her Doctor of Nursing Practice (DNP) in 2015. She has been an Instructor in the School since 2012, previously practiced in the School’s PATH Diabetes Clinic and worked on the Bone Marrow Transplant Unit at UAB Hospital. She is dually trained in Nursing and Public Health, with a focus on Health Behavior.

Combs is a former athletic trainer for the football teams at Louisiana State University, UAB and Birmingham-Southern College who earned his Master’s as a Clinical Nurse Leader in 2010 through the Accelerated Master’s in Nursing Pathway (AMNP). He earned a second Master’s as a Family Nurse Practitioner in 2012, has served as a full-time faculty member since 2013 and is currently pursuing his Doctor of Philosophy in Nursing (PhD) in the School.

Buys and Combs are excited by the challenge of continuing the success the track has achieved under Somerall.

“Katie and I have worked with Dr. Somerall for several years and have learned much from her expertise,” Combs said. “We look forward to taking what we have learned from her and our other mentors and guiding the FNP Specialty Track to take the next step.

“We will constantly strive to build on the amazing foundation laid by those before us that has made ours one of the most widely recognized FNP tracks in the country.”

As graduates of the School themselves, Buys and Combs are well aware of the high standards by which they will now be measured in their new roles.

“Dr. Somerall has taught me so much about engaging and supporting students,” Buys said. “We currently have many exciting initiatives that are allowing our students to receive valuable, concentrated clinical experiences in rural and underserved populations, which are better preparing them to bridge the gap in access to health care locally and globally. I am grateful to be teaming with Bryan to take on more of a leadership role in the FNP Specialty Track and continue the impact Dr. Somerall has had here.”

Professor and Senior Associate Dean for Academic Affairs Linda Moneyham, PhD, RN, FAAN, believes Buys and Combs are well suited for the task ahead of them.

“We are fortunate to have two very talented, very capable people taking over in these leadership roles,” Moneyham said. “Both Bryan and Katie have taught in the track for some time and are well aware of what it will take to sustain the program’s momentum as we move forward. It should be a very smooth and successful transition.”
Last modified on January 09, 2020
Tweet
Tagged under