The Dean’s Nursing Scholars program welcomes high-performing students into the School of Nursing. 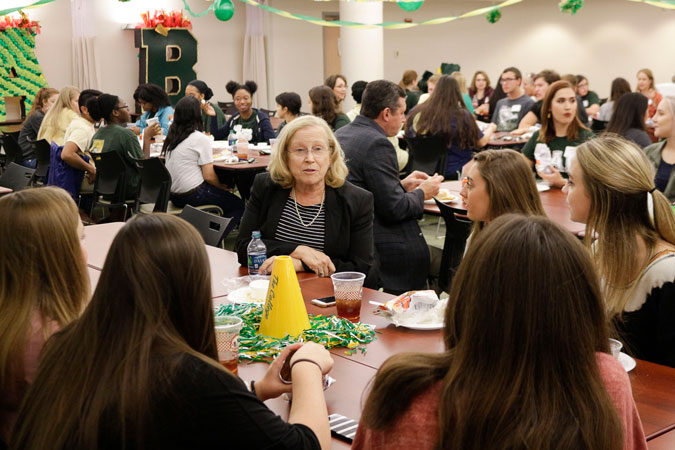 Twice a year, Dean's Nursing Scholars are invited to Dinner with the Dean, an event that allows them to interact with Dean Harper and other faculty.For traditional college students who want to be nurses, the University of Alabama at Birmingham School of Nursing checks all of the boxes of a top-level BSN program -- nationally ranked, with multiple degree programs and specialties in the top 10, scholarship opportunities and access to interdisciplinary clinical experiences at one of the nation’s top academic health science centers .

Dean’s Nursing Scholars receive automatic admission to the School of Nursing in their junior year, provided they meet specific criteria -- an ACT score of 25 or above, a GPA of 3.2 or higher, and have been admitted through the UAB Office of Undergraduate Admission. Once enrolled at UAB, Dean’s Scholars must maintain an overall GPA of 3.0 and a 3.2 GPA in required nursing pre-requisite courses. In addition to priority admission, Dean’s Scholars attend special events to learn about nursing and the BSN program.

“The development of the Dean’s Nursing Scholars program has been a great strength of the School,” said Senior Associate Dean for Academic Affairs Linda Moneyham, PhD, RN, FAAN. “It’s another way for us to recruit top students, and there are opportunities for Dean’s Scholars to meet and interact with many of our internationally renown faculty early on in the program. It fosters a strong connection with the School and a motivation to retain their priority admission status.”

“I probably would have come to UAB regardless because it has a great nursing program, but the Dean’s Nursing Scholars program was the icing on the cake,” Barnett said. “It means I already have a spot as long as I keep my GPA up, which you have to do anyway to get into nursing school. It is like getting rewarded for doing what you’re supposed to do.”

The program also allowed Barnett to round out his college experience before starting his classes in the SON. 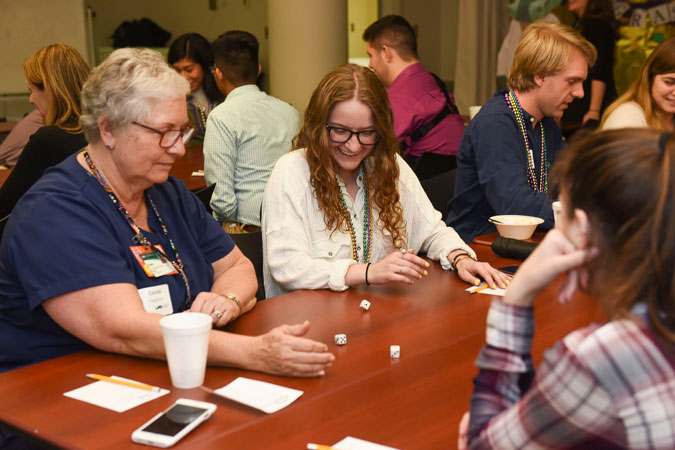 “During my prerequisite classes, I was able to spend those first two years of college participating around campus. I was an orientation leader, a resident assistant and a TrailBlazer. Being a Dean’s Scholar allowed me to do things for UAB while I had the chance, and I appreciated the freedom to choose well-rounded curricular activities,” Barnett said.

Pre-nursing student Kaitlin Bosshart decided to become a nurse when she was a junior in high school. She heard about Dean’s Nursing Scholars when applying to colleges, and said she appreciates the security it offers.

“I was super excited to hear about this program. I didn’t know it was something I could be involved in, and being part of the program gives a sense of security in coming to nursing school,” Bosshart said. “It made applying to school a more enjoyable experience because now I’m able to wait for my letter and look forward to my clinical rotations.”

Bosshart’s academic path is also different from other Dean’s Scholars, she said. When applying to nursing school, she realized she would need to retake a class. The realization was stressful, Bosshart said, but she received a lot of support from her pre-nursing adviser.

“My advisor helped me make sure I was enrolled in the right class, and she supported my decision to push my classes back one semester,” Bosshart said. “I want other pre-nursing students to know that ultimately, you have to work really hard and that hard work pays off, but at the same time, by coming to UAB you can know that if you do stumble, there are people there to support you and help you through it.”

The Dean’s Nursing Scholars program provides unique opportunities to students planning a career in nursing, and as a member of the TrailBlazer Student Recruitment Team, Barnett regularly tells prospective students about what being a Dean’s Nursing Scholar means. The program has encouraged him to maintain a standard of academic excellence, he said, and created a smooth transition into nursing school. Dean’s Nursing Scholars are invited to special events, where they are able to tour the School, meet faculty who are creating innovative advances in education, science and clinical practice that are saving lives every day, and interact with other scholars.

Ultimately, the program is another draw for top students, Barnett said.