In their own words, by Caleb Light 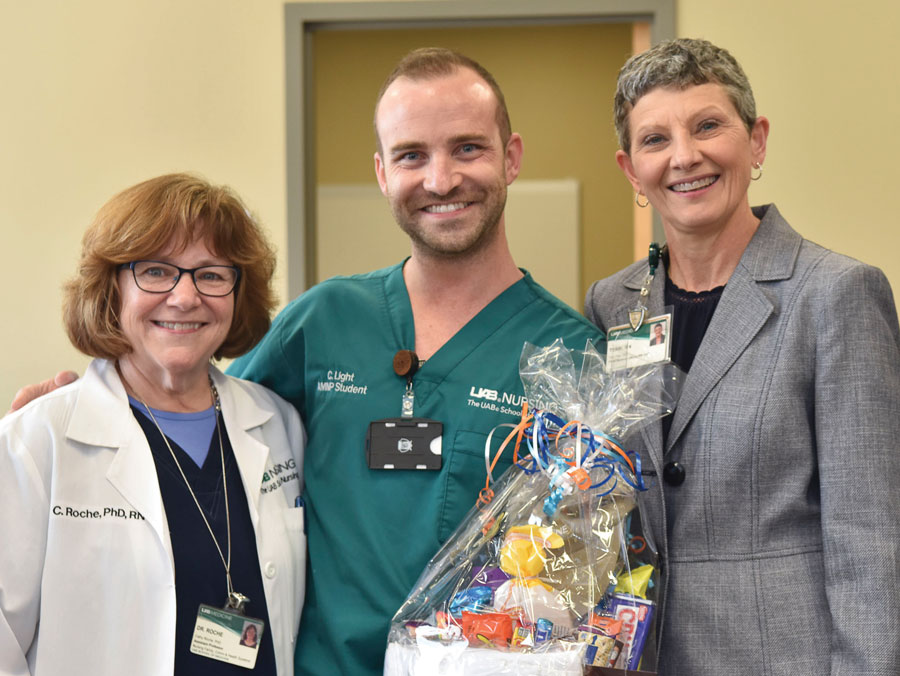 Caleb Light is a second semester student in the Accelerated Masters of Nursing Pathway (AMNP) at the UAB School of Nursing.

When I got to work for my 12-hour clinical shift in the UAB Medicine Labor and Delivery Unit, I was pretty nervous about it. It was my first day on the unit, and with about three hours to go, Dr. Cathy Roche grabbed me and told me I could go into the room for a delivery.

As an Accelerated Master’s in Nursing Pathway (AMNP) student, I thought I’d mainly observe the delivery and assist in a more minor way. I did not realize that I would end up being able to share a profound, personal moment with the family in that room.

The woman in labor and her husband were from Central America, and while the delivery was going smoothly, the hospital team was having difficulty communicating with them. They spoke a local dialect with about 2 million speakers, and the hospital’s translating device was not functioning properly.

Thankfully the husband spoke some Spanish, and so do I, so I did my best to translate that everything was going smoothly. As I talked to the husband, I relayed that delivery was going well, and he would pass that along to his wife.

The family did not have prenatal care, so as soon as the baby was born, it was taken aside for a few quick tests. This baby had a really good APGAR score — it was moving around, great color, great breathing.

The baby also had a cleft condition, and when the father walked over and saw this, he started crying.

I told him everything was fine, that their baby was in great health, but he was worried. He told me everything wasn’t going to be fine, gesturing to his lip. That’s when I assured him it would be OK — their baby would have a full life.

From that part of the world, a cleft condition can put limits on your life. Even though I did not speak their local dialect, I was able to relay the amazing impact health care could have on their child’s life. With the resources at UAB, and the available surgeries, a cleft condition is easily managed.

In the moment, I wasn’t even thinking about what I was doing. My only thought was, “These parents think this kid’s life is already over,” and my first priority was to let them know that it was not. Going into the day and going into that delivery room, I did not realize I would play such a personal role as a nurse, but that’s the great part of this profession. Every day we can go into work and impact a patient’s life or impact their family.

At this time, I’m not sure which type of nursing I’ll enter after finishing the AMNP Pathway, but I’m thankful for the opportunities our clinicals provide.