Internationally known as an innovative pioneer, leader and scientist for high-impact research in pain management and palliative care 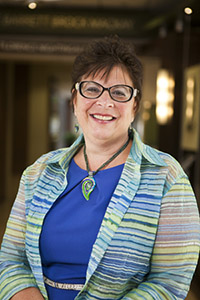 Professor and Marie L. O’Koren Endowed Chair Marie A. Bakitas, DNSc, CRNP, ACHPN, AOCN, FAAN, internationally known as an innovative nursing pioneer, leader and scientist for her sustained, high-impact program of research in pain management and palliative care, has been named the recipient of the 2015 Friends of the National Institute of Nursing Research (FNINR) Path-Paver Award.

The Path-Paver Award is given to a mid-to-late career nurse scientist who has achieved one or more breakthroughs in theory development, research methods, instruments, or subject matter that has paved the way for other scientists and who has influenced and mentored the next generation of nurse researchers.

Marie Bakitas is “one of the most influential palliative care nurse scientists and pioneers,” said Linda Cronenwett, PhD, RN, FAAN, Dean Emeritus and Professor at The University of North Carolina at Chapel Hill School of Nursing and Co-Director of the Robert Wood Johnson Foundation Executive Nurse Fellows Program in her nomination letter. “Dr. Bakitas’ impact and sphere of influence in the field of palliative care, through mentoring the next generation of scientists and clinicians, extends beyond theory to practice, legislation and health policy, all of which have changed the quality of life for individuals and their families.”

Over the past three decades, Bakitas has spearheaded initiatives in pain and symptom management through quality improvement, research and policy change projects. Through her membership in the Oncology Nursing Society, she has made significant and sustained contributions to advancing innovations in pain relief, beginning in 1991 as a participant in the ONS President’s “Pain State of the Science” conference that in part stimulated the Joint Commission to adopt pain as the “5th Vital Sign”, with her work in developing a neuropathic pain screening and treatment algorithm, uncovering the understudied nature of chemotherapy-induced peripheral neuropathy, and a subsequent evidence-based reference card for bedside nurses through the ONS Nociceptive and Neuropathic Pain Putting Evidence into Practice national initiative.

Her work in pain management led Bakitas into her current body of research in creating a model of early palliative care.  Early palliative care tests the theoretical constructs proposed in the 1990 World Health Organization (WHO) Pain Relief and Palliative Report. The WHO model challenges the notion that palliative care is about ‘end of life’.

Since 1999, Bakitas has led a team that has tested and demonstrated the efficacy of Project ENABLE (Educate, Nurture, Advise, Before Life Ends), the first nurse-led early concurrent palliative care model for rural persons with newly diagnosed advanced cancer and their caregivers. Bakitas and her team have shown the effectiveness of ENABLE in improving quality of life, mood, and survival for patients with advanced cancer, and by doing this, reduced burden in their family caregivers. Today, she is implementing the ENABLE model in the rural Deep South to reduce disparities in access to palliative care for minority, underserved and Veteran populations. She also is paving the way for integration of early palliative care for patients with heart failure and their caregivers through a series of pilot studies and a NINR R0-1.

“Dr. Bakitas’ passion, commitment and scientific contributions have led to a shift in the paradigm of care for seriously ill persons and their family caregivers,” said Professor and Associate Dean for Research Karen Meneses, PhD, RN, FAAN. “She has continuously and diligently sustained her research program to break new ground in the most challenging areas of health care.”