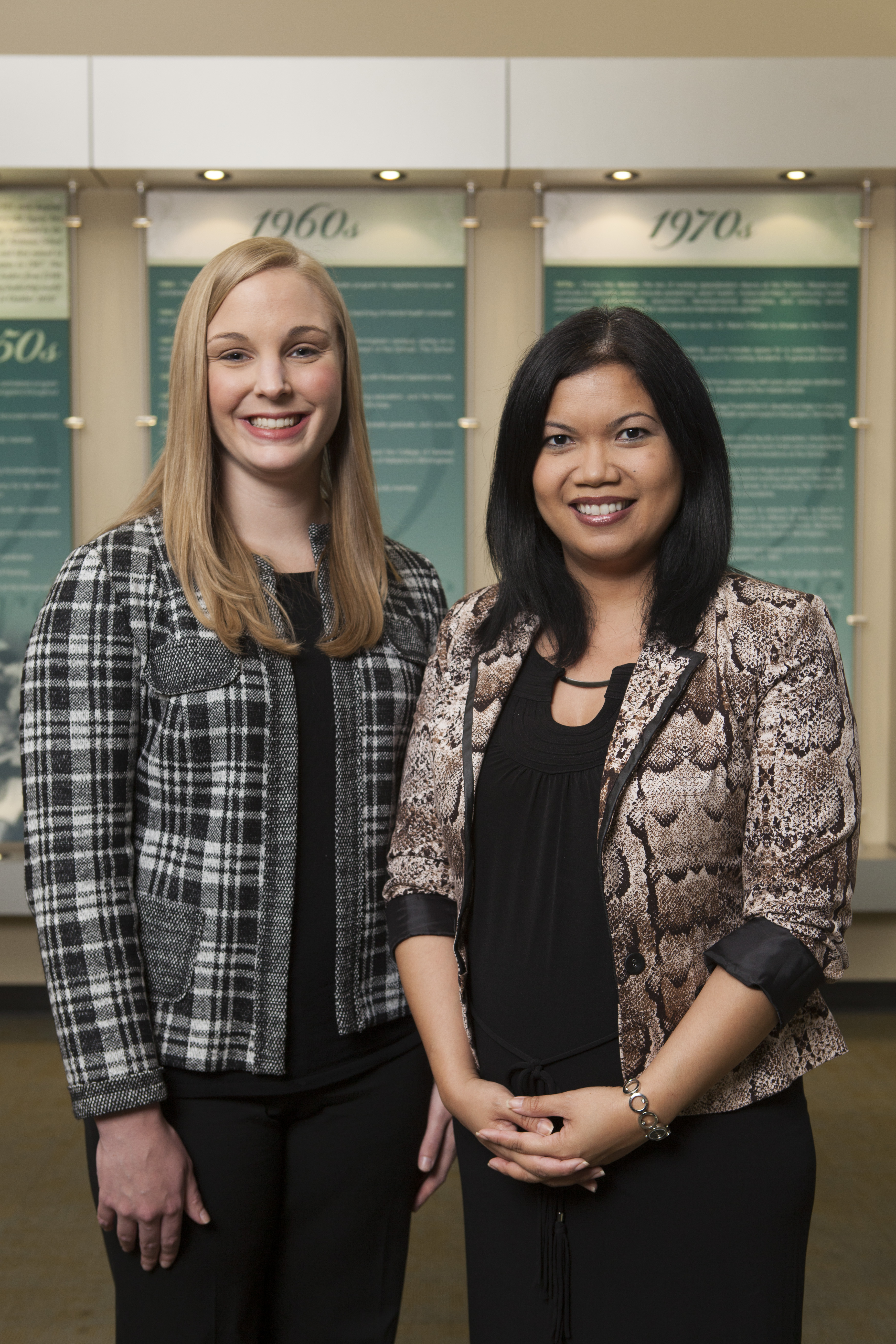 To say that Ladores loves her work doesn’t paint the complete picture, however. The reality is she loves it because she lives it every day.

Ladores, her husband, Andrew, and 7-year-old son, Asher, deal with the complexities of CF daily as Andrew has throughout his 42 years. So Ladores has the unique perspective of looking at the devastating disease as a scientist, a caregiver for someone with CF and a loved one.

“It is very personal for me,” Ladores said. “I am really invested in this, not just from the professional side of things, but because I’m also personally connected to it.”

It was that personal connection with both her family and the CF community as a whole that led Ladores to her current project, a study of women’s basic knowledge of fertility, the effects of CF on fertility among women of childbearing age who have the disease and the potential impact a recently approved drug, Orkambi™, may have on fertility rates among those women.

Specifically, Ladores and doctoral student Leigh Ann Bray, MSN, RN, CNL, want to examine how Orkambi™, which is being hailed as a game changer in the CF community because it addresses the underlying genetic cause of CF and not just the symptoms, may improve life expectancies for CF patients and as a result, unplanned pregnancies among women.

With a Faculty Development Grant funded by the UAB Provost’s Office, Ladores and Bray are conducting their study on “Female Fertility in the Age of New CFTR-Modulating Drugs” in hopes of gleaning information that may help provide a roadmap to more comprehensive care related to the reproductive health of women with CF.

The 10 women with CF will also be asked to participate in a taped interview in which Ladores will ask about their fertility experiences, how CF has impacted those experiences and how the new CF drugs can potentially affect their fertility.

The numbers are rising
CF is a genetic disease in which people have inherited two copies of the defective CF gene, and for decades it was considered a childhood malady because those who suffered from it did not live much past childhood.

According to the Cystic Fibrosis Foundation (CFF), over 10 million people, or one out of every 31 Americans, carry this defective gene, and it is the most common genetic disorder among Caucasians in the United States. This autosomal recessive disease affects approximately 30,000 people in the U.S. and 70,000 worldwide.

Still, with significant advances in research, genetic testing, therapeutics, comprehensive clinical care and more effective drugs such as ivacaftor, which was approved in 2012, and the combination drug Orkambi™ or its generic ivacaftor/lumacaftor, half the population affected by CF in the U.S. is now age 18 or older, and the median predicted survival age for those with CF has climbed to 41.1.

Women account for 48 percent of the CF population, and while it is a disease primarily thought of as being associated with the lungs and lung function, it also affects the pancreas and other organs that can lead to gastrointestinal, ear, nose and throat, muscular skeletal and cardiac issues. For the women of childbearing age, you can add reproductive health issues to that list as well.

“With advances in our personalized medicines such as this targeted new targeted CF genetic drug, we’re seeing about 50 percent of the people with CF who now are adults which is amazing,” Ladores said. “I personally know many people with CF in their 50s who are living full, healthy lives. We’ve got great medicines that address those issues, and now we have adults who want to engage in all developmental milestones and that includes parenthood.”

In a growing number of cases, however, women with CF who didn’t plan on being parents are finding themselves dealing with an unexpected pregnancy.

“I didn’t think it could happen”
While exact data on CF female fertility rates is unknown, the CFF Patient Registry indicates that the number of women with CF who have become pregnant has doubled in just over 20 years, from 116 reported pregnancies in 1992 to 249 in 2012. And with life expectancies continuing to improve, that number will likely continue to increase exponentially as well.

At the heart of the issue is the perception held by many women with CF that they are infertile simply because they have the disease.

Most men with CF, almost 99 percent according to Ladores, are born sterile while the infertility issue for women with CF is that their cervical mucus is excessively thick just as the mucus that plugs up their lungs and GI system.

In short, many women with CF don’t use protective barriers or other methods to prevent pregnancy simply because they don’t think they have to.

Ladores points to a study released in the summer of 2015 by a group of researchers at her alma mater, The University Pennsylvania, and presented to the American Congress of Obstetricians and Gynecologists which found that less than 50 percent of women with CF use birth control because most believe it’s not needed.

“Compare that with the average non-CF women in this country where 65 percent of them do use some kind of birth control,” Ladores said. “The thinking of these women is ‘I’m not going to get pregnant anyway so why do I have to use it?’

“So we’re seeing more and more of these women getting pregnant because they are not using barriers and with this new drug, Orkambi™, that can interfere with how effective their birth control pills can be and potentially improve their fertility, it can be double trouble.”

Entering uncharted territory
Ladores said she first began to hear reports from the CF community starting in 2012 of women with CF who had taken the drug ivacaftor and found themselves facing the challenge of an unexpected, unplanned pregnancy. Then she began to hear the laments of the women facing those high-risk pregnancies who said, “I wish someone would have told me that this drug could make me more fertile.”

Those are the situations Ladores and Bray hope to help alleviate in the future through their research.

“It is so new for many of them to live this long that all this knowledge is new,” said Bray, who worked with younger CF patients during a year spent as a bedside nurse in the Pulmonary Clinic at Children’s of Alabama. “It is uncharted territory in a way.”

Entering those unknown waters is why she is so excited to be mentored by someone like Ladores, who understands the CF world from so many perspectives.

“She goes to the same clinic with her husband that we go to do research,” Bray said. “Every time we interview a participant she can tell them she understands what they are going through from a different perspective for sure. She knows more what their every-day life is like, and it works really well.”

Happy, healthy and another on the way
Very early in their relationship, Ladores and her husband both knew they wanted to be parents and despite the hardships, they were determined to try.

First, Ladores had a chromosomal analysis done to determine that she did not carry the CF gene. Then they embarked a heart-wrenching, bank account-draining round of five in vitro fertilization treatments and, finally, on the fifth cycle, a frozen embryo survived. Today he’s a witty, funny, caring 7-year-old named Asher who knows that his father underwent a life-saving lung transplant in 2011 and that every year on April 21 he celebrates “Popsicle Day” because that is when he came out of the freezer.

Asher does carry the CF gene which will require a conversation when he is older, but after being blessed with one child, the Ladores’ knew they wanted another. So after seven more rounds of fertility treatments, they are awaiting the arrival of their second child very soon.

“We are just beyond blessed because we know that there are many couples out there who, despite thousands and thousands of dollars they’ve invested in fertility treatments and years of waiting for that baby, the day never comes,” Ladores said. “So there is a personal connection in this for me because I want to help them anyway I can.”