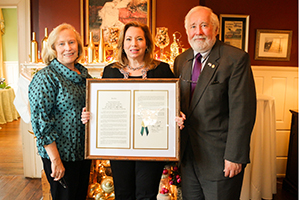 From left to right, Dean Doreen C. Harper with Susan Brouillette and Board of Visitors member John Beard.The University of Alabama at Birmingham (UAB) School of Nursing’s Board of Visitors (BOV) held its year-end meeting on Tuesday, Dec. 1, and used the occasion to thank four special BOV members for their overwhelming generosity and support of the School.

At a gathering that included the Junior Board of Visitors at Rucker Place, the BOV recognized members Bruce Burns, Eileen Meyer, John Beard and Barrett MacKay for outstanding contributions to the School in recent years that will provide important resources to accomplish future goals. 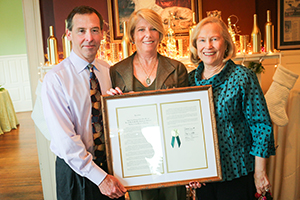 From left to right, Rick MacKay with Board of Visitors member Barrett MacKay and Dean Doreen C. Harper.In 2011, Burns named a scholarship for Meyer as a 40th birthday surprise, and after they met their first recipient at the 2014 Scholarship Luncheon they were so moved they left the luncheon and drove straight to their attorney’s office to change their will to include a planned gift of potentially more than $2 million that will grow their scholarship and impact even more students.

Beard, who joined the BOV in 2014, is president of Alacare Home Health and Hospice, and he and his entire leadership team have agreed to support the School’s new building by pledging to name the Alacare Home Health and Hospice Nursing Skills Suite in Honor of Susan A. Brouillette, MPH, MBA, Chief Executive Officer. Brouillette, Beard’s sister, earned master’s degrees in business administration and public health from UAB in 1988. 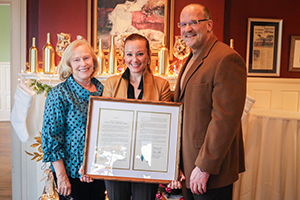 From left to right, Dean Doreen C. Harper with Board of Visitors members Eileen Meyer, CRNP, and Dr. Bruce Burns. Barrett MacKay, who has served on the BOV since 2002 and as chair from 2008 to 2010, and her husband, Rick, have previously endowed a nursing scholarship and brought to life the Barrett Brock MacKay Florence Nightingale Letters exhibit for the School’s students and faculty.

They were also early investors in the campaign to raise funds for the School’s new building, pledging $1 million to name the Rick M. and Barrett Brock MacKay Florence Nightingale Scholars Gallery. This space will be a special place for students and faculty located on the first floor of the new building adjacent to new high-tech simulation labs. 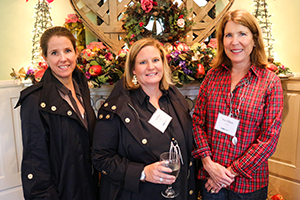