University of Alabama at Birmingham School of Nursing Assistant Professor Bryan Wilbanks, PhD, DNP, CRNA, has received the John F. Garde Researcher of the Year Award for his extensive work with a team of researchers assembled by the American Association of Nurse Anesthetists (AANA) Foundation to improve outcomes for anesthesia patients.

The John F. Garde Researcher of the Year Award recognizes individuals who have made a significant contribution to the practice of anesthesia through research. Garde was previously a Foundation Trustee, AANA Executive Director and charter member of the AANA Foundation. Wilbanks and his teammates were recognized at an AANA Foundation dinner held on September 10 at the Nurse Anesthesia Annual Congress in Seattle, Washington. 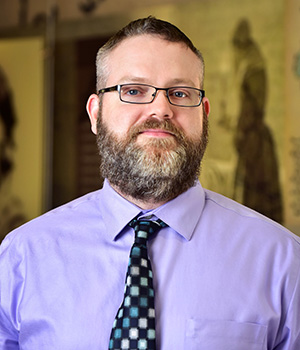 Dr. Bryan WilbanksThe AANA Foundation first convened its Closed Claims Research Team of Certified Registered Nurse Anesthetists (CRNAs) to analyze insurance claims in which CRNAs were involved in, or contributed to, an adverse anesthetic event in 1995. The initiative was renewed in 2013, and its work is ongoing. Wilbanks, faculty in the School’s Post-BSN to DNP Pathway for Nurse Anesthesia, joined the initiative in 2015.

He was one of 17 volunteers nationwide who, starting in 2015, reviewed 245 anesthesia-related insurance cases that served as the foundation for the team’s most recent project, “The AANA Foundation Malpractice Closed Claims Study: A Descriptive Analysis.” He traveled to Chicago one weekend a month over 18 months to participate with the team’s research.

The team built a database of information from the 245 reviewed cases that was then used to complete other aspects of the project.

“The whole team put a lot of time and effort into this work, and we are very proud of it,” Wilbanks said.

Wilbanks contributed to four abstracts which resulted from his work on the project.

He is the principal investigator on “The Role of Transfer of Care in Anesthesia-Related Closed Claims,” which has been submitted to the AANA Journal, and “The Role of Documentation Quality in Anesthesia-Related Closed Claims: A Descriptive Qualitative Study.” He was co-investigator on “The AANA Foundation Malpractice Closed Claims Study: A Descriptive Analysis,” which has been published in the AANA Journal, and “Obstetric Anesthesia Complications.”

The team will renew its efforts in 2018 and will review data from 2013 to present when it resumes its work next year.

The Post-BSN to DNP Pathway for Nurse Anesthesia is clinically focused to prepare students for the full scope of nurse anesthesia practice. Graduates are prepared to promote evidence-based practice, patient safety and quality in health care and demonstrate leadership skills in today's health care setting. Graduates can apply to take the certification examination administered by the NBCRNA. Satisfactory performance on this examination is necessary in order to practice as a CRNA. In many rural and underserved communities, CRNAs provide the only available anesthesia services. The Post-BSN to DNP Pathway for Nurse Anesthesia is accredited by the Council on Accreditation of Nurse Anesthesia Educational Programs (COA).
Read 6105 times Last modified on March 22, 2019
Tweet
Tagged under