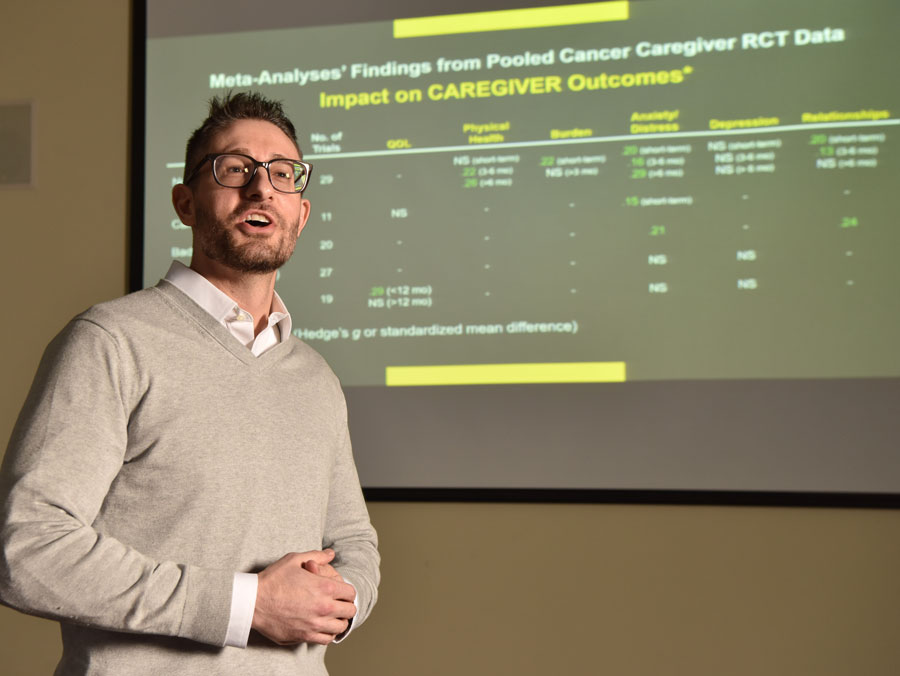 University of Alabama at Birmingham School of Nursing Assistant Professor J. Nicholas Dionne-Odom, PhD, RN, has received the Friends of the National Institute of Nursing Research (FNINR) 2020 Protégé Award, recognizing his excellence in early career nursing research. Dionne-Odom will receive/ received the award during the FNINR Virtual NightinGala on October 28.

This annual award is presented to an evolving nurse scientist who shows promise in advancing science, and who is within the first six years of completing their PhD or post-doctoral study. Dionne-Odom earned his PhD in 2013 and came to the UAB School of Nursing in 2014 for a postdoctoral fellowship.

“I’m so very grateful for all of the opportunities and support the UAB School of Nursing has given me over the years,” Dionne-Odom said. “To be honest, this award is less a reflection of me and more a reflection of two powerful forces that have gotten me to where I’m at — mentorship and family.”

“I would not be here without the unwavering support of my family,” he said. “Additionally, much of my success up to this point is because I have been able to mirror just a small portion of Dr. Marie Bakitas’ extraordinary qualities as a researcher and leader. To all early career nurses out there, seek out colleagues and mentors who believe in you and celebrate your successes as their own.”

Throughout his burgeoning career, Dionne-Odom has received more than $5.1 million in extramural funding, including a seven-year R37 grant from the National Cancer Institute to study the effectiveness of Project ENABLE Cornerstone, a lay navigator-led, community-based palliative care intervention for rural and African-American family caregivers in the Southeast. He is also was recently named an inaugural Fellow of the Betty Irene Moore Nurse Leaders and Innovators Fellowship program and was named a Fellow in the American Academy of Nursing in 2020.

Receiving the Protégé Award was not just an achievement in his career, Dionne-Odom said, but also a call to reflect on 2020 and to take active steps towards building a more equitable and just health care system.

“This Protégé Award, for me, is an opportunity to reflect on the moment, and is a call to action,” he said. “2020 has been a year of profound tragedy and hardship, for all of us. It has been a year that makes it impossible to deny that our American institutions and policies, and our health care systems have deeply engrained structures of sexism and racism. As nurses, nurse scientists and leaders, we must not only deeply examine and reflect on these cultural and institutional toxicities, we must take action. It is our responsibility to forge a more just system of health in the world, and for all of us.”

Last modified on September 30, 2021
Tagged under