Bruce Burns gives to the School, honor's wife's service as a nurse 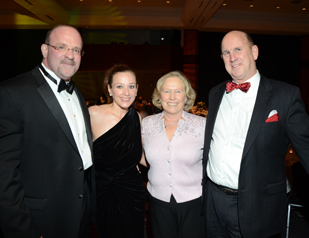 This husband and wife have a deep and mutual appreciation of one another's contributions to health care. Thus, when Eileen's 40th birthday was coming up last year, Bruce decided to create a surprise gift for her to honor her service as a nurse. He endowed a scholarship in her name at the UAB School of Nursing, where she earned her master's degree and received her nurse practitioner education.

"Was I surprised? Oh yes!" said Eileen, explaining she was both surprised and delighted: "This is such a wonderful thing that Bruce did. Never in my wildest dreams would I have guessed that he was setting up something like this."

Eileen says she's happy to know that deserving UAB nursing students will have a smoother financial journey due to funds generated by this scholarship. Too, she said she's glad the scholarship is at the UAB School of Nursing, where she received master's-level education that has served her well in a nursing career she loves.

Bruce feels this is a fitting tribute to Eileen, who began her UAB nursing career as a nurse practitioner for famed cardiothoracic/vascular surgeon Dr. Al Pacifico, and, since Dr. Pacifico retired, has become a nurse practitioner working with famed cardiothoracic/vascular surgeon Dr. James "Jim" Kirklin. "Eileen has that winning combination as a nurse," said Bruce. "She is intelligent and caring, very proactive on behalf of her patients."

To present Eileen's scholarship, Bruce hosted a surprise party last December at the Cahaba Grand. He told Eileen they were going there for a Princeton Baptist Medical Center event. When they arrived, she instead found a roomful of guests waiting to wish her "Happy Birthday." On hand to present the scholarship was her former boss, Dr. Al Pacifico. Guests also included UAB School of Nursing's Dean Doreen Harper and her husband Bill. "It was a pretty magical evening," said Bruce.

In coming on the BOV, Dr. Bruce Burns adds board/committee work that already includes his being on the Board of Directors of the Birmingham Regional Emergency Medical Services and the Medical Executive Committee at Princeton Baptist Medical Center.

Having spent the first 30 years of his life in West Virginia, Bruce completed medical-school and residency education at West Virginia University. He still has family in West Virginia, including a daughter. As he spoke, he was looking forward to the impending birth of his first grandchild.

He said the BOV will have not only his support but Eileen's as well. "Eileen is as much a part of all this as I am."
Read 9565 times Last modified on March 11, 2016
Tweet
Tagged under