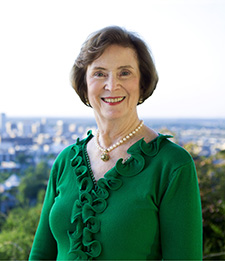 Leadership and pioneering became a way of life for Juanzetta S. Flowers, DSN, RN, an inductee into the Alabama Nursing Hall of Fame and the Alabama Healthcare Hall of Fame.

One of Alabama’s first nurse practitioners, Flowers is a member of the UAB School of Nursing Board of Visitors (BOV), which currently is raising funds to endow a doctoral level scholarship.
The BOV – a community-board vision of Dean Emeritus Rachel Z. Booth – is closely linked to Flowers, whom Booth enlisted to help make the BOV a reality. Flowers also worked with Booth in setting up the nursing school’s Pan American Health Organization/World Health Organization Collaborating Center on International Nursing. Ultimately earning three degrees from UAB’s nursing school plus a UAB counseling degree, Flowers was a nurse practitioner at UAB’s medical school and then an innovative faculty member at UAB’s nursing school. Her first UAB position was as the nurse who helped organize the first private outpatient clinic staffed by UAB physicians – the forerunner of The Kirklin Clinic.

Juanzetta Flowers smiled when asked why, time after time, she accepted a trail-blazing job or task. Her answer was modest, but insightful. “I guess you could say this about me. “She showed up and said yes.’ I was willing to try.” Too, she added, there was always a need or opportunity beckoning in conjunction with ground-breaking jobs and tasks.

Early in her nursing career, she decided to seek a job in the Birmingham complex just becoming known as UAB. “I realized that UAB was where the action was. I wanted to be part of that action.”

After working as a UAB nurse for a few months, in 1972 she embraced an opportunity to enroll in new education at UAB to become what later would be called a nurse practitioner. A pressing health-care problem moved her to say yes. “The challenge was to reduce the number of cervical cancer deaths among Alabama women,” she said. “Alabama was number one nationally in that death rate. My fellow nurse Shirley Hester and I were told that, if we would take available training, we in turn could teach public health nurses around the state to give Pap smears and pelvic exams to women who didn’t have access to care. The goal was to prevent many cervical cancer cases and to catch others when they were treatable and curable.” Four years later, Alabama’s cervical cancer death rate had dropped from first to 49th - demonstrating the power of nursing.

Flowers became a nurse practitioner when Alabama’s first two nurse practitioner programs were taking root, both at UAB – one in the School of Nursing, and the other, where Flowers was trained, in the School of Medicine’s Department of Obstetrics and Gynecology. That department was headed by the physician who had just become Juanzetta Flowers’ husband – Dr. Charles E. “Charlie” Flowers Jr. His health-care views had been impacted both by his physician father and his nurse mother, an early-day nurse anesthetist. “Charlie always respected nurses and believed in their abilities,” said Juanzetta. Decades after supporting a prototype nurse practitioner program, Dr. Charlie Flowers would express in his own words why he entrusted nurses with advanced roles in patient care. “Nurses do this well. They do it successfully,” he said. “They take the time. And the nurse communicates with the patient.”

After Juanzetta Flowers entered a period of her life at UAB’s School of Nursing in which she earned graduate degrees and served as a faculty member, she found the school furthered her already-present desire to try new things. “This School of Nursing has a mindset that you should not be afraid to try something new, to push the envelope, in order to do good.”

She learned from fellow faculty and from nursing students – students she taught, and classroom colleagues from when she herself was a student. “As a UAB doctoral nursing student in the first Doctor of Science in Nursing program, I was in class with some awesome students,” she recalled. “I knew that some would become superstars from whom we would be hearing great things down the road. And we have.”

Flowers is proud of progress made in areas in which she has pioneered – including the advanced-practice role of the nurse practitioner. It’s a cause she championed as a nurse practitioner herself and later as two-time president of the Alabama State Nurses Association. “Today the possibilities for the good that can be achieved through advanced nursing practice have evolved beyond anything we could have imagined,” she said. “However, much more progress is needed, including more widespread utilization of nurse practitioner services in Alabama”

Through the years, Flowers also has had what she terms as a love affair with nursing. Time after time she has had her beliefs confirmed that nurses improve health care, nurses discover new knowledge to lead care delivery, and advanced practice nurses can improve Alabama’s health status indicators.

When speaking of her love for nursing, Flowers often speaks hand-in-hand of the love for nursing felt by her physician husband, who died in 1999. “The day I lost Charlie, I knew right then that I wanted to create a nursing scholarship bearing his name at the UAB School of Nursing. Every time a UAB nursing student is awarded funds from that scholarship, I think, ‘Charlie would have loved this. He would be smiling.’ ”