Committed to raising funds for UAB scholarships in pediatric nursing, the JBOV last year and this year has been focused on funding a scholarship in memory of brother-and-sister twin infants – the Seth Houston McCoin, Jr., and Elizabeth Morgan Endowed Scholarship in Pediatric Nursing. 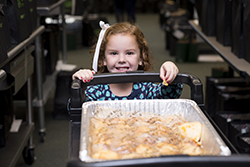 The 6th No-Show Ball has gone down in history as another record-breaker. This fundraising event – which brings tote-bags of tasty food and drink to the doorsteps of supporters – this year broke all past records in terms of numbers of totes sold.

The 2013 event, held on November 3, resulted in the sale of 504 totes (compared to 482 last year) by its sponsoring organization, the UAB School of Nursing's Junior Board of Visitors (JBOV). This year marked the second-in-a-row block-buster No-Show Ball event for the JBOV.

Committed to raising funds for UAB scholarships in pediatric nursing, the JBOV last year and this year has been focused on funding a scholarship in memory of brother-and-sister twin infants – the Seth Houston McCoin, Jr., and Elizabeth Morgan Endowed Scholarship in Pediatric Nursing.

As the young women and young men in the JBOV prepare for and carry out a No-Show Ball event, they are united by a common feeling of love and commitment that bonds them to their mission and to one another – a bond felt by every single JBOV member.

After spreading their message to the community to sell the totes, JBOV members come together for a work-filled weekend to make the No-Show Ball a reality. Organized in side-by-side assembly-line style, JBOV members labor for hours to pack food and beverages into tote bags. Then they scatter into their various ve¬hicles and drive to locations near and far – to deliver the totes directly to the doorsteps of those who supported the event. For tote recipients, that's when the fun feast can begin. In the comfort of their homes, they dine on No-Show Ball goodies.

Joining to make this year's venture a success were the event's Sponsors and Partners.
The Tote Partners were Ashley Mac's, B-Metro Magazine, Full Moon Barbeque, Jim N' Nick's, Neighborhood Hops and Vine, Robert Trent Jones Golf Trail, Royal Cup Coffee, and The Scribbler.
Sponsors included The Hope and Miracles Project, Jean Tomlinson, Mitchell Industries, McWane, Inc., and many anonymous donors. Added to that, to comprise yet another Sponsor, was the total of individual monetary contributions given by every JBOV member in addition to his or her work in hosting the event.

Thus it was that, on June 21, an audience gathered at the UAB Women & Infants Center for the dedication of the Seth Houston McCoin, Jr. and Elizabeth Morgan McCoin Endowed Scholarship in Pediatric Nursing.

The tiny twin babies for whom the scholarship is named, Houston and Morgan, were born three months prematurely at St. Vincent's Birmingham on September 7, 2011. Houston died four days after birth. His sister Morgan, transferred to UAB Women & Infants Center when she was a month old, lived until age 9 months. After their deaths, their parents – JBOV member Elizabeth McCoin and her husband Seth – said they were so touched by their babies' caretakers that they wanted Morgan and Houston to be remembered through a JBOV pediatric nursing scholarship.

"I can't think of a better gift you could give," Dean Doreen C. Harper said of the babies' parents as she spoke at the ceremony. "This presentation is about your strength and courage, your perseverance and inspiration." Although Morgan and Houston had short lives, Dean Harper said that "families will know them, through the nurses awarded this scholarship for years to come."

Incoming JBOV Co-Chair Kate Hamilton said JBOV members are "so glad we could remember the babies in this way."
Read 7865 times Last modified on February 15, 2019
Tweet
Tagged under