This exhibit honors Barrett Brock MacKay, an alumna of the UAB School of Nursing and past Chair of the School’s Board of Visitors. 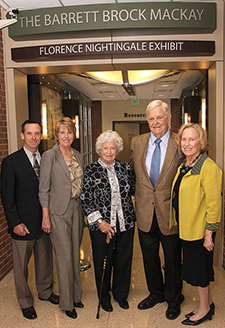 Florence Nightingale left countless gifts to the world of nursing, and some of those treasures are in the possession of UAB’s Reynolds Historical Library—48 letters, a newspaper clipping, and a photograph from her era. Most of the letters were handwritten by Nightingale and several others were dictated and signed by her. The letters date between 1853 and 1893, when Nightingale was between the ages of 33 to 73 (she died at age 90). According to the Florence Nightingale Museum in London, UAB’s Nightingale collection spans periods from which there is little information about Miss Nightingale, making the letters even more significant.

Lawrence Reynolds, M.D., a native Alabamian who became an internationally known radiologist, purchased the letters in 1951 from a New York bookstore. Dr. Reynolds developed a deep interest in health-related memorabilia, and his donations of that memorabilia formed the basis for UAB’s Reynolds Historical Library. He donated most of the Nightingale letters in 1958 – the same year he donated considerable other memorabilia to the medical school at UAB. Additional Nightingale letters were donated by the Reynolds family following Dr. Reynolds’s death in 1961.The topics covered in the letters range from military and civil hospitals and nursing matters, to sanitary affairs in India, to contributions to various charities (including contributions to widows and orphans of the Franco-Prussian War).

Nightingale wrote the majority of the letters to a physician, J. Gillham Hewlett, M.D., who was a health officer and later a sanitary commissioner in India. Without ever visiting India, Nightingale consulted extensively with Hewlett by mail, giving him what apparently was highly valued advice about improving sanitary conditions in India. These letters reflect not only Nightingale’s knowledge of nursing but also of public health.

In 2010, a donation from the Delia and John Robert Trust made it possible for the UAB School of Nursing to digitize, transcribe and publish the letters online. Rick and Barrett MacKay, along with the Harry B. and Jane H. Brock Foundation, donated the lead gift to name the Barrett Brock MacKay Florence Nightingale Exhibit – an interactive display at the UAB School of Nursing that fosters innovative education and scholarly activity focused on Nightingale’s contributions to modern health care, public health, and evidence-based research.

This exhibit honors Barrett Brock MacKay, an alumna of the UAB School of Nursing and past Chair of the School’s Board of Visitors. Barrett and Rick MacKay are avid supporters of nursing and have championed this effort to perpetuate the important and historically significant observations, recommendations, and accomplishments of nursing icon Florence Nightingale. Barrett and Rick, along with the Harry B. and Jane H. Brock Foundation, have generously funded this exhibit to showcase the important work and methodology of Florence Nightingale and provide an effective teaching tool and catalyst for continued health care research.

You can be part of this exciting endeavor through various naming opportunities, including honoring a loved one. Together we can work to improve the quality of nursing education in Alabama and provide faculty and students with tools needed to explore the linkage between current practice and what Miss Nightingale proposed as evidence-based practice over 100 years ago.

This project would be a true “Living Legacy” for all individuals touched by nursing and health care. If you are interested in donating to the Florence Nightingale Letter Project or have any questions, please contact us at (205) 975-8936.

These treasured letters are all available for viewing electronically through the UAB Digital Collections.