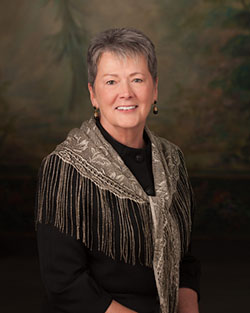 The University of Alabama at Birmingham (UAB) School of Nursing, along with the Nursing Chapter of the UAB National Alumni Society, hosted the School's annual Alumni Night Dinner and Awards Ceremony October 9, 2014 during UAB's homecoming week.

The dinner provided an opportunity for alumni to network and reconnect with fellow classmates and faculty, and it featured an archives display of UAB School of Nursing memorabilia. It also paid tribute to a number of outstanding alumni.

Nancy B. Moody, PhD, president of Tusculum College in Greenville, Tenn., was honored as the 2014 Distinguished Alumni Award Recipient. During her tenure, Moody led the college's successful reaffirmation of accreditation from the Southern Association of Colleges and Schools Commission on Colleges and secured a $45 million community facilities direct loan for the construction of two new apartment-style residence halls and a science and math facility, for incorporation of the institution's total debt and for refurbishing an existing academic building. She also secured a $3.875 million gift for the naming of the Ronald H. and Verna June Meen Center for Science and Mathematics that will be completed in 2016. In addition, Moody has been instrumental in bringing several new undergraduate and graduate programs to the college, including nursing, chemistry, criminal justice, psychology and a master of business administration degree. The college's board of trustees recognized Moody's contributions to Tusculum by presenting her with the inaugural Founder's Award in February 2013. As a token of appreciation, Moody was presented with a bound copy of her nomination letters by UAB School of Nursing Dean Doreen Harper, PhD, RN, FAAN.

In addition, a number of other alumni were honored with awards for their service and dedication to nursing.

The Marie L. O'Koren Alumni Award for Innovation is named for the UAB School of Nursing's second dean, Marie L. O'Koren, who passed away in 2012. During her tenure as dean, O'Koren changed the landscape of nursing education in the state of Alabama. She led the UAB School of Nursing to become one of the top 20 nursing schools in the country and established a diversified master's program and the first doctorate in nursing program in the Southeast. She dramatically increased support for nursing education and research. The award recognizes alumni who, like O'Koren, have made innovative contributions to the field of nursing. The recipient this year was Kelly A. Goudreau, PhD, RN, ACNS-BC, FAAN, Associate Director Patient Care Services/Nurse Executive (ADPCS/NE) at the Veterans Affairs Southern Oregon Rehabilitation Center and Clinics (VA SORCC) in White City, Ore.

The Jo Ann Barnett Award for Compassionate Care honors UAB School of Nursing graduates who exemplify the best in nursing care by performing above and beyond job requirements on a regular basis. The award is named for Jo Ann Barnett, a B.S.N. and M.S.N. graduate of the UAB School of Nursing who was a champion for the highest quality of compassionate care for her patients and their families. She passed away in 2002. The 2014 recipients are Jason O. Hitchcock, BSN, MBA, of Pelham, Ala., a Clinical Database Manager in Data Resources, a division of Advanced Enterprise Analytics, at UAB Hospital; Christy D. Holshouser, FNP, BSN, RN, a family nurse practitioner in private practice in Greer, S.C.; and Cheri L. Plasters, BSN, CCRN, of Birmingham, a floor nurse in the SICU at UAB Hospital.

The Young Alumni Merit Award recognizes a young nurse leader who has received a degree from the UAB School of Nursing within the last 10 years and has demonstrated significant accomplishment and leadership in the field of nursing. The recipient for 2014 is Lindsey Laminack, BSN, RN, nurse coordinator with the Etowah County (Ala.) Health Department.
Read 8868 times Last modified on October 17, 2014
Tweet
Tagged under