Effective December 4, 2014 at the winter meeting of the Board of Visitors (BOV), Barbara O’Neal Eddleman becomes the BOV’s 10th Chair. Joining her in leading the Board in the Co-Chair role is Dr. Douglas C. “Doug” Tilt, a BOV member since 2007. 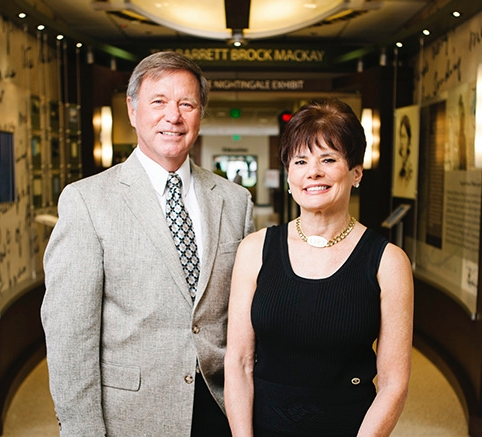 Effective December 4, 2014 at the winter meeting of the Board of Visitors (BOV), Barbara O’Neal Eddleman becomes the BOV’s 10th Chair. Joining her in leading the Board in the Co-Chair role is Dr. Douglas C. “Doug” Tilt, a BOV member since 2007.

Coming to the Chair post after two years as Co-Chair, Barbara believes in the BOV’s ability to make good things happen. “As BOV members at this particular time, we have a four-star opportunity to serve this UAB School of Nursing that is really making a difference,” she said. “We can provide support that can be a win-win-win for everyone involved –the School’s students, its faculty and staff, and people of this state.”

Doug is a physician with a long track record as a primary care leader –all the way from UAB to the Middle East.  Excited about the UAB School of Nursing’s current primary care initiatives, he said, “This nursing school is helping to develop new templates for providing primary care to the underserved.  There are many medically underserved Alabamians –living in rural areas and also in cities, including Birmingham.”

Barbara, formerly a career woman in marketing and commercial real estate, also is a mom –of architect daughter Cameron. A BOV member since 2002, Barbara understands the joy of giving and of seeing generosity among those in her life.  She is appreciative of UAB School of Nursing support given by her late husband, Emmet O’Neal, (who died in 2004), and by Emmet’s family; two UAB nursing scholarships bear the O’Neal name.  Since marrying businessman Bill Eddleman in 2010, Barbara has seen how Bill and his fellow Hill Crest Foundation leaders enjoy supporting UAB School of Nursing programs.

Doug retired in March from UAB, where he held the Eleanor E. Kidd Endowed Chair in Primary Care Medicine and was director of the UAB Health System’s Camellia Medical Group.  He and his artist wife Sandy have three daughters –pediatrician Lindsey, realtor Rebecca, and Alex, who has begun UAB nursing studies. A recent family addition, granddaughter Elliot, is the daughter of Lindsey and husband Nate.  Within his own family, Doug has felt the gratification of giving; he and his brothers LeRoy and Kenneth established a scholarship at the UAB School of Nursing in memory of their nurse mother, Martha Fanning Tilt.

Barbara and Doug take the BOV reins after two years of BOV success under the leadership of Chair Robert E. “Bobby” Luckie, III –success that Bobby said “is a credit to dedicated Board members, Dean Doreen Harper’s leadership, and fine support from the School’s faculty and staff.”

Expressing confidence in new BOV leadership, Bobby said, “Barbara and Doug will be great leaders of this Board, no doubt about it.  They are capable and compassionate people.”