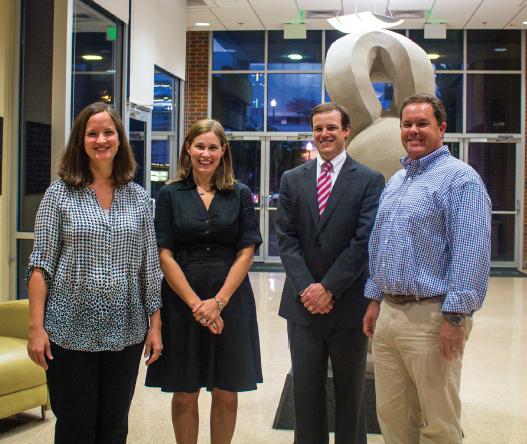 In August 2012, Kelli and Bains Fleming lost their firstborn child, son William, 16 minutes after his birth. Kelli said that JBOV member Elizabeth McCoin and her husband Seth, who had lost their twin babies, were “a great resource, guiding us in how to handle our grief.”  This helped lead Kelli to JBOV membership, along with “my huge respect for nurses who take care of our babies and their mommies and daddies.” In December 2013, parenthood again came to Kelli, an attorney with Burr & Forman, and Bains, also an attorney, when Kelli gave birth to a healthy baby girl, Ann Clark.

Tim Hennessy, Jr. said he came on the JBOV “to honor the McCoins.”  Also, he thinks it’s “incredible” what the UAB School of Nursing is doing with scholarships, and, as a current Leadership UAB member, “I’m so proud of what UAB is doing right here in our own backyard.”  Tim is in sales for locally-based Concepts & Associates Inc., which specializes in promotional products and corporate gifts. He and his wife Melanie, a first-grade Crestline Elementary teacher, are parents of two young sons, 4-year-old Tim and 1-year-old William.

Grateful to UAB to be alive today, Elizabeth Riddle was born three months prematurely and spent the first six weeks of her life in the neonatal intensive care unit of UAB Hospital.  She believes in the JBOV’s support of pediatric nursing scholarships, including one in memory of Elizabeth and Seth McCoin’s twin babies, who died in 2011 and 2012, respectively.  “I also love the McCoins,” she said.  Elizabeth, a speech pathologist at Birmingham Veterans Affairs (VA) Medical Center, and her husband, Zac, a certified public accountant, are parents of 6-year-old daughter Camilla, 3-year-old son Watson, and baby daughter Emmaline, born in July.

Ken Taylor first came to know Seth McCoin when they both were growing up in Nashville.  Now Ken and his family live in the same Mountain Brook neighborhood as do Seth and his wife Elizabeth. “I feel that coming on the Junior Board of Visitors is a great way to honor Seth and Elizabeth, and the memories of their baby son Houston and their baby daughter Morgan,” said Ken.  He is in sales of Olympus Scientific Solutions industrial inspection equipment.  He and his wife Evie, a Regions Bank trust officer, are parents of 6-year-old daughter Frances and 4-year-old son Law.