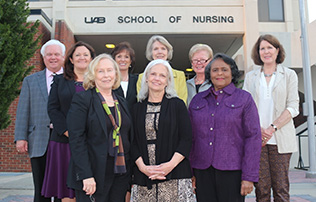 University of Alabama at Birmingham (UAB) School of Nursing Dean and Fay B. Ireland Endowed Chair in Nursing Doreen C. Harper, PhD, RN, FAAN, has established a new National Advisory Council, a group of intellectual thought leaders, all alumni of the School, who have a record of transforming health care and health outcomes within their own education and practice areas. The Council’s first meeting was held March 16, 2015.

The National Advisory Council is designed to serve in an advisory role to Dean Harper. They are charged with examining and facilitating innovative and practical strategies with the goal of promoting the UAB School of Nursing as the premier educational institution that prepares students at all levels to practice “nursing without walls”.  The Council’s distinguished alumni have all demonstrated innovation in translating nursing practice within multiple venues across the nation and the globe. The inaugural members are:


• Velinda J. Block, DNP, RN, NEA-BC – A 2010 Doctor of Nursing Practice graduate of the UAB School of Nursing, Block currently serves as Chief Nursing Officer for KentuckyOne Health in Louisville, Kentucky. Prior to joining KentuckyOne, Dr. Block was Chief Nursing Officer and Senior Assistant Vice President for UAB Hospital and served concurrently as Assistant Dean for Clinical Affairs for the UAB School of Nursing. Earlier in her career, she was Vice President of Patient Care Services and Director of Inpatient and Emergency Nursing for St. Louis Children's Hospital and held various roles at Vanderbilt University Medical Center. Dr. Block frequently lectures on nursing practice and is a long-time active member of the American Organization of Nurse Executives.

• Joanne M. Disch, PhD, RN, FAAN – Disch graduated from the UAB School of Nursing in 1976 with a Master of Science in Nursing degree. She is serving as Clinical Professor at the University of Minnesota School of Nursing after retiring recently from her position as Director of the Katharine J. Densford Center for Nursing Leadership. Prior to her academic position, she was Chief Nurse Executive at the University of Minnesota Medical Center, Fairview. Dr. Disch is the Immediate Past President of the American Academy of Nursing and has also served as President of the American Association of Critical-Care Nurses (AACN) and the AACN Certification Board. Having chaired many other boards and councils, including the American Association of Retired Persons (AARP) board, her commitment to professional organizations is unsurpassable. In 1994, she received the UAB School of Nursing's Distinguished Alumni Award.

• Delois S. Guy, DSN – Guy earned her Doctor of Science in Nursing degree from the UAB School of Nursing in 1980. She was the first African- American faculty member at UAB School of Nursing in 1969, and her leadership has spanned over four decades of teaching psychiatric/mental-health nursing, nursing theory, research, community health, and gerontological nursing. She now holds the title of UAB Professor Emeritus of Nursing. Dr. Guy served as the Co-Principal Investigator for a study entitled Resources for Enhancing Alzheimer's Caregiver Health, funded by the National Institute for Aging and the National Institute of Nursing Research. She was an Alabama Delegate for the White House Conference on Aging, received the Minority Women in Mental Health Fellowship Award from the Kellogg Leadership Program, and also received the Ethnic/Racial Minority Clinical Fellowship Award from the American Nurses' Association. In 2013, she was inducted into the Alabama Healthcare Hall of Fame.

• Madeline G. Harris, MSN, RN – A two-time graduate of the UAB School of Nursing with her Bachelor of Science in Nursing in 1975 and Master of Science in Nursing in 1990, Harris serves as Director of the Women's Breast Health Fund of the Community Foundation and has devoted her career to improving the lives of cancer patients. She has worked in both bedside nursing and oncology nursing management positions and has helped lead the way in many revolutionary cancer-treatment innovations, including the Interdisciplinary Breast Health Center at UAB, which she co-founded and built. Her hard work has been honored by the American Cancer Society, and she was inducted into the Alabama Healthcare Hall of Fame in 2010. Ms. Harris was influential in the establishment of the Young Breast Cancer Survivorship Network initiative in the UAB School of Nursing and continues to work with breast cancer survivors through this program.

• Larry G. Hornsby, CRNA – A two-time graduate of the UAB School of Nursing, with Bachelor of Science in Nursing and Nurse Anesthesia degrees, Hornsby is currently the Senior Vice President of Operations and Vice-Chief Anesthetist Officer for NorthStar Anesthesia, an anesthesia management company employing 1,200 providers at facilities across 18 states. Mr. Hornsby has served in various leadership positions in the Alabama Association of Nurse Anesthetists, including two terms as President. On the national level, he has served as Regional Director, Treasurer, Vice President, and President of the American Association of Nurse Anesthetists (AANA). Mr. Hornsby remains highly involved in the AANA, having chaired various advisory boards and committees such as the AANA Commission on Anesthesia Economics and Reimbursement, Government Relations Committee, and Anesthesia Payment Advisory Panel. An expert in anesthesia business, he lectures frequently on topics relating to the subject for anesthesia schools and seminars across the country. In 2013, Mr. Hornsby received the Agatha Hodgins Award for Outstanding Accomplishment from the AANA--the highest honor bestowed by the organization.

• Martha G. Lavender, PhD – Lavender is a two-time graduate of the UAB School of Nursing with Master of Science in Nursing and Doctor of Philosophy in Nursing degrees. She currently serves as Interim President of Gadsden State Community College and as Visiting Professor for the UAB School of Nursing. Dr. Lavender is a national leader in nursing, higher education, and emergency preparedness. She is a former president of the Association of Women's Health, Obstetric, and Neonatal Nursing, and her work to develop policy for the advancement of nursing practice was recognized by receiving the organization's highest honor, the Distinguished Professional Service Award. Dr. Lavender has co-authored publications on pandemic influenza, emergency preparedness training, and care models for HIV patients. She also serves as an advocate for abused children, emergency services, and maternal/child health. In 2013, she was inducted into the Alabama Nursing Hall of Fame.

• Sue Ellen Lucas, MSN, RN – Lucas is a 1979 Master of Science in Nursing graduate of the UAB School of Nursing and has served faithfully on the UAB School of Nursing's Board of Visitors (BOV) since 2003. She chaired the BOV from 2009 to 2013 and led the board through many successful fundraisers during her tenure. Ms. Lucas had a nursing role in the pioneering medical genetics program launched in Alabama in the late 1970s—she was hired by Wayne Finley, MD, PhD, and Sara Finley, MD as the fourth nurse to work in the medical genetics program that they headed at UAB. Since retiring from nursing, she has volunteered extensively for the School and has also served on the board for the Birmingham Botanical Gardens. Ms. Lucas received the Junior League's highest community honor for chairing the establishment of a "Children Can Soar" program at the Jefferson County Health Department's Central Health Center—an educational entertainment program for parents and children who are waiting to see doctors.

• Cynthia S. Selleck, PhD, RN, FNP, FAAN – Selelck graduated from the UAB School of Nursing in 1987 with a Doctor of Philosophy in Nursing degree. She currently serves the School as Professor and Associate Dean for Clinical and Global Partnerships. Dr. Selleck's career has centered on primary care and developing the workforce to meet the needs of our most diverse and underserved populations. She has led 45 grant funded projects to expand the number of health professionals who provide primary care, particularly in rural and inner-city underserved areas. Dr. Selleck served as President and Board Member of the National Area Health Education Center (AHEC) organization from 2003-2009. She has received multiple national and state-wide teaching awards and grants and has led innovative curriculum development initiatives.

• Cathy R. Ward, RN, DNSc, NEA-BC – Ward is a 1977 Bachelor of Science in Nursing graduate of the UAB School of Nursing. She is Director of Nursing for the Ronald Reagan UCLA Medical Center in Los Angeles, California and holds the appointment of Assistant Clinical Professor in the UCLA School of Nursing. Dr. Ward is responsible for nursing care in the inpatient and observation areas in the medical center, which is composed of 24 nursing units, 455 licensed beds, and more than 2,500 employees; including approximately 1,800 registered nurses. She has provided leadership and direction at UCLA for the past 26 years in various management roles. Prior to her appointment at UCLA, Dr. Ward was an assistant professor at Boston University School of Nursing, a clinical nurse specialist at Beth Israel Hospital in Boston, and a cardiovascular nurse clinician in cardiac surgery at the University of Alabama. She also served as a member of the executive transition team in the planning and opening of the new Ronald Reagan UCLA Medical Center in 2008.

“This distinguished group will help our School keep our fingers on the pulse of the nursing profession nationally, across academia, practice and the community,” Dean Harper said. “Each brings diverse, unique insight that will illuminate and clarify future trends to sustain the educational excellence and leadership momentum of the School for the short- and long-term. One of their most important functions will be to analyze the challenges facing nursing education and formulate strategic solutions that translate the UAB School of Nursing’s missions into innovative programs.”