The family, friends, and colleagues of the late Nancy Harris Smith gathered at the University of Alabama at Birmingham (UAB) School of Nursing on Dec. 11, 2015, to celebrate the establishment of The Nancy Harris Smith Endowed Memorial Support Fund for Nursing Excellence and present the inaugural awards to two deserving recipients.

Smith, whose legacy of excellence in nursing stretched back nearly 40 years before her untimely passing from breast cancer on February 18, 2014, began her career in the School as a nursing associate in 1978. She returned in 2008 after an accomplished clinical career and raising three daughters to serve as an instructor in the School’s Simulation and Skills Labs.

As a faculty assistant and later an inspirational and gifted teacher, Smith made a lasting impression on both faculty and students through her curiosity, dedication, compassion, thirst for knowledge, exceptional clinical competency, and passion for nursing excellence. 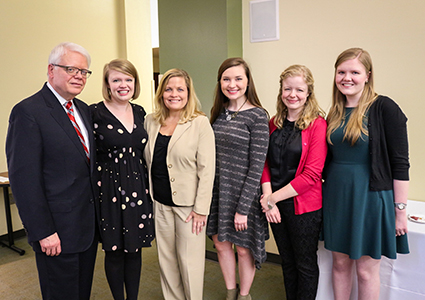 “Penni and Meredith were fitting choices for these first awards, and I think Nancy would be pleased,” said Doreen C. Harper, PhD, RN, FAAN, Dean, and Fay B. Ireland Endowed Chair in Nursing. “They are wonderful examples of how her legacy of excellence here in the UAB School of Nursing continues to impact us every day.”

The fund was made possible through the generosity of Smith’s husband, Dr. Nathan Smith, their daughters, Charis, Lydia, and Miriam and countless friends and colleagues who generously gave to the School of Nursing as a tribute to her life and work. This special endowment was their way to commemorate her life and express their unending gratitude for her grace and her kindness, Harper said.

“Because of her grace in handling crucial conversations, students and her faculty colleagues came away stronger and better equipped to face challenges,” Harper said. “From the time she came back to us in 2008, we saw that grace every day, especially when she was diagnosed with breast cancer not long after returning to the faculty.

“Nancy served her students and faculty colleagues with passion, enthusiasm and dedication in everything she did despite battling cancer.” 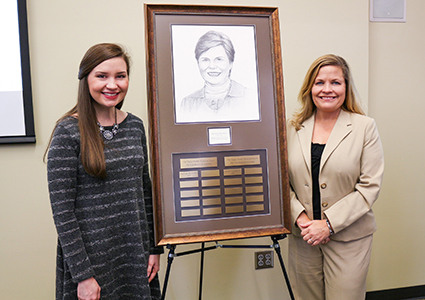 At the awards presentation, a plaque bearing a beautiful rendition of Smith and the names of the recipients was unveiled. This plaque will be housed in the School’s current Simulation and Skills Labs and will move to a similar space when a future building expansion is complete.

“It is a fitting tribute to a woman who had a servant’s heart and whose work in the School was incredibly meaningful and fulfilling and a way for her to live out a great desire to serve others,” Harper said.

“Nancy expressed on more than one occasion that her work as a nursing instructor was a major factor in maintaining her well-being as she lived with cancer,” Harper said. “Even though we lost Nancy way too soon, the legacy she left behind – leadership, mentorship, grace through adversity, and passion for nursing education – is something that her faculty colleagues and I remember about her every day.”