Professor applauded for level of commitment to students, 'serves as a role model for others'
By Jimmy Creed 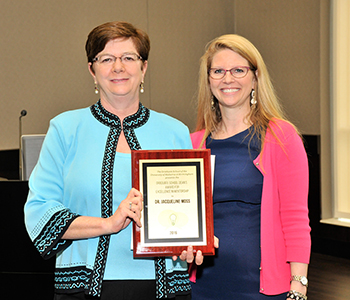 Dr. Jacqueline Moss, left, was one of 15 graduate level faculty from across UAB who received a 2016 Graduate School Dean's Award for Excellence in Mentorship. Shown with Dr. Moss is Dr. Lori McMahon, dean of the UAB Graduate School.

The dictionary defines a mentor as “someone who teaches or gives help or advice to a less experienced and often younger person.” University of Alabama at Birmingham (UAB) School of Nursing Professor and Assistant Dean for Clinical Simulation and Technology Jacqueline Moss, PhD, RN, FAAN, believes a mentor also listens, develops long-term relationships and provides “tough love.”

In recognition of her mentoring of students – both Doctor of Philosophy in Nursing (PhD) and Doctor of Nursing Practice (DNP) – and faculty alike in the School over 14 years, Moss was one of 15 UAB faculty to receive a 2016 Graduate Dean’s Award for Excellence in Mentorship.

She was honored at a ceremony on Wednesday, April 20, as part of UAB’s Mentoring Week 2016, and those who nominated her for the award could not imagine a more deserving candidate.

“Dr. Jacqueline Moss is one of the best examples of a mentor I have ever known,” said Instructor Nancy Wingo, PhD, MA.

“She exemplifies a level of commitment to her students and the institution that serves as a role model for others,” said current PhD student Carrie Lee Gardner, DNP, CRNP, FNP-BC.

“No matter how busy or stressed she may be at the time, Dr. Moss is always available to offer her knowledge and wisdom on difficult issues,” said Instructor and Instructional Design Manager Dan Murphy, MEng, BS. “I have no doubt that any future success I have will be due to her support.”

Moss was overwhelmed by the award and the outpouring of praise that came with it.

“This award means more to me than any other I have ever received because it is recognition from my students,” Moss said. “I am very honored that my students think enough of me to nominate me for this award, and to receive it is very special.”

To be a good mentor, especially to doctoral students, there are a few things she always keeps in mind, Moss said. She remembers that getting a doctorate is hard work. That it is a lonely existence for an extended period of time. That without constant direction a course of study and a career can very easily run off track. Above all else she remembers that the students must come first. 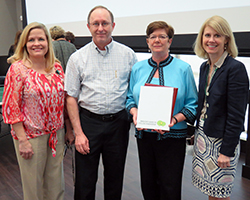 From left to right, Assistant Professor Dr. Penni Watts, Instructor and Instructional Design Manager Dan Murphy and Instructor Dr. Nancy Wingo were among the former mentees of Dr. Moss who nominated her for her award.

“Even when there are many things going on with me at once, I still put the students first,” Moss said. “The students have to come first because they are depending on me. Doctoral students depend on feedback and guidance from their mentors, and when they don’t get it they’re stuck or they go off on a tangent that wastes time and energy.

“They need continuous feedback and guidance over the years it takes them to complete their degree, and it is my responsibility to give them that.”

The Graduate Dean’s Award for Excellence in Mentorship recognizes full-time, regular UAB faculty members who have demonstrated exceptional commitment as mentors of graduate students and/or postdoctoral fellows. To be eligible, full-time UAB graduate faculty members must hold a primary appointment in one of 10 schools other than the Graduate School or in a Joint Health Services department.