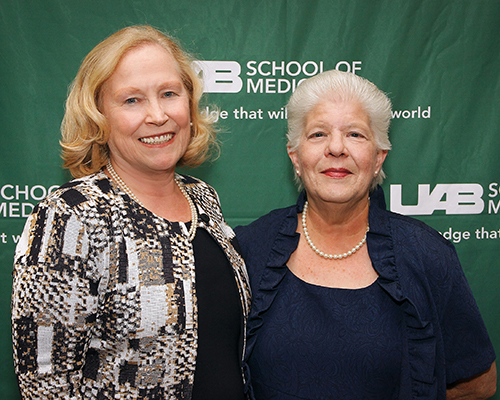 Dean Doreen C. Harper with Dr. Pam Fordham at the UAB Center for Palliative and Supportive Care's Legacy Celebration.Two University of Alabama at Birmingham (UAB) School of Nursing alumnae, an alumna and retired faculty member, and a member of the Board of Visitors (BOV) have been recognized by the UAB Center for Palliative and Supportive Care in its first group of Palliative Care Legacy Builders.

Dr. Pam Fordham, Jackie Palmore, Jackie Westbrook, and John Beard were among the group of 14 honored in seven categories for almost two decades of dedication in helping to build one of the country’s most comprehensive palliative and support care programs.

Fordham earned her Master of Science in Nursing (MSN) from the School in 1976 and her Doctor of Philosophy in Nursing (PhD) in 1989. She joined UAB in June 1979 and retired as Chair of the Family, Child Health & Caregiving Department in November 2011.

Palmore earned her Bachelor of Science in Nursing (BSN) from the School in 1986 and joined UAB in September 2004 as the Palliative Care Coordinator.

Westbrook earned her BSN from the School in 1990 and her MSN in 2002. She spent 27 years at UAB, serving as the Palliative and Comfort Unit nurse manager from shortly before it opened until April 2015.

Beard is the chairman and president of Alacare Home Health and Hospices Services, Inc., and serves on the Board of the Alabama Nurses Foundation. He was selected by the Alabama State Nurses Association (ASNA) as its 2006 Outstanding Non-Member and was the 2010 recipient of the ASNA D.O. McCluskey Award given to a health care administrator who demonstrated outstanding support of nurses and nursing in that year.

Beard, who has been a member of the BOV since 2014, was also one of 26 members recently appointed to the Health Literacy Partnership of Alabama by executive order of Gov. Robert Bentley.

At a ceremony labeled a Legacy Celebration, representatives of the UAB Center for Palliative and Supportive Care acknowledged the contributions of individuals from patients to providers to administrators and the public who have excelled over the years in promoting the Center’s mission.

Fordham was honored along with Dr. John Shuster as The Leaders. It was noted that, “Drs. Shuster and Fordham representing medicine and nursing together envisioned the Center and worked to build the original structure and mission of the program as a synergistic entity between these two professional disciplines and Schools. Having served as the first Director and Deputy Director respectively their leadership also propelled the academic and education mission of the Center to the national stage.”

Palmore and Westbrook were honored as The Nurses. It was noted that, “Together the ‘Jackies’ led the original efforts in UAB Hospital to establish the Palliative Care Consultation Service and to open the inpatient Palliative and Comfort Care Unit. Working together with countless nurses and physicians they have helped to solidify our specialty and the holistic nursing model of care as one to be emulated.”

Beard was honored along with Jane Webb LaCagnina as The Supporters. It was noted that, “Serving on the first Community Advisory Board for the Center these two community individuals have connected, collaborated and contributed consistently to the success of the Center for Palliative and Supportive Care. Their combined wisdom, passion and guidance have propelled the Center to heights in our community, region and nationally that most would have not thought possible.”