For University of Alabama at Birmingham (UAB) School of Nursing Bachelor of Science in Nursing (BSN) students Kelly Mitchell and Sarah Urdaneta, the University’s summer commencement ceremony was one of the most unique moments in their entire lives.

It was special enough to be among the nearly 1,400 students who graduated from UAB and the estimated 700 who walked in the ceremony at Bartow Arena on Saturday, Aug. 13. But Mitchell and Urdaneta also shared the touching experience of graduating together as mother and daughter and the lifetime bond that went with it.

“I am so proud she actually went back and accomplished her goal of getting her bachelor’s degree,” Urdaneta said. “She’s been talking about it for years, ever since I was in high school, and now she’s finally done it. And it makes it even more exciting that she’s doing it with me.” 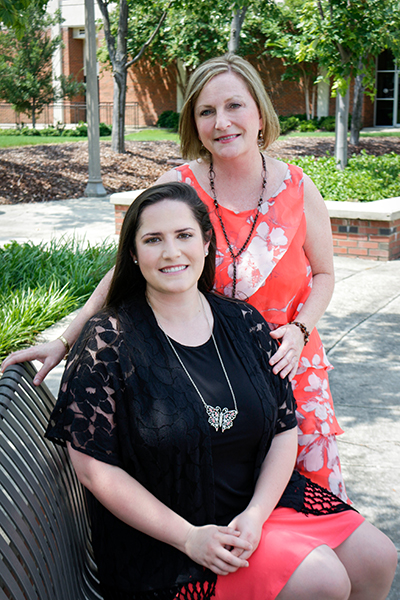 Sarah Urdaneta, seated, and her mother, Kelly Mitchell, will share the unique and memorable experience of graduating together as part of UAB's inaugural summer commencement ceremony on Saturday, Aug. 13.Their story starts 31 years ago when Mitchell graduated from what is now Bevill State Community College with an associate degree in nursing and began an RN career that has taken her from Jasper to Orlando, Florida, to Birmingham and back to Jasper, mostly as an operating room nurse. At times she thought about going back to get her BSN, but as she said “life gets in the way sometimes” and she never did.

But when her daughter graduated from Carbon Hill High School in 2012 and decided she wanted to become a nurse, Mitchell knew the time had come for her to follow through on her career plans as well.

Urdaneta, a member of the School’s VA Nursing Academic Partnership (VANAP) Undergraduate Cohort 10, first went to Bevill State for two years to complete her undergraduate core course requirements and then was accepted to the UAB School of Nursing’s BSN program in 2014 as a transfer student. That same year, Mitchell was accepted into the School’s RN-BSN (RN Mobility) program, which meant they could work towards the next chapters in their nursing careers at the same time.

“We came over for orientation together on the same day and did some things like that together,” Mitchell said. “We didn’t end up having any of the same classes together because she lived in Birmingham, and I was in Jasper and did everything online. But we went parallel through our UAB journeys together.”

When they started, they shared the thought that it would be great to graduate together someday, but both admit they never truly thought it would happen, especially after Mitchell had to take an entire semester away due to an illness in the family. But when she got ready to register for the Spring 2016 semester, Mitchell did some counting and realized that if she really buckled down and focused on the two courses she had remaining, her daughter might get a surprise come graduation time.

“That’s when I decided I just had to go on and knock it out because if I kept pushing it out further and further, I was going to be on Social Security and still not have my bachelor’s degree,” Mitchell said. “It was in January of this year that the light bulb came on that we really could finish at the same time, and I thought that would be fantastic.”

After deciding to complete her coursework, Mitchell couldn’t keep her secret under wraps even though she tried.

Ever the sharp detective, Urdaneta noticed something unusual in a conversation with her mother one day and began asking questions. Mitchell had mentioned she was getting together letters of reference to apply to the School’s Master of Science in Nursing (MSN) program, and Urdaneta wanted to know why if she wasn’t graduating until December. That’s when Mitchell told her their dream would come true in August.

“She got ahead of herself a little bit,” Urdaneta said with a laugh. “She was talking about the master’s program, and I said ‘I thought you had to be finishing your bachelor’s before you could apply to the master’s program.’ She said she wasn’t going to say anything, and I asked her what she had planned to do. She said, ‘I was just going to show up in my cap and gown and surprise you!’”

Once the news was out, the two couldn’t have been happier, although Mitchell admits she had conflicting emotions at first and worried how her daughter might react when she learned they actually would graduate together.

“I did not want Sarah to feel like I was stealing any of the thunder from her college graduation,” Mitchell said. “I had already graduated nursing school once, and I thought that maybe I didn’t need to do it after all. But she was proud and excited.”

Urdaneta was just pleased that her mother had finally followed through on something she had stressed to her daughter – always finish what you start.

“I don’t think it is a bad thing at all,” Urdaneta said. “It’s was a special day, and it was fun to share it with my mom. Maybe now I can even talk her into going to get our master’s degrees together. That way we can graduate together again someday.”
Read 10505 times Last modified on August 17, 2016
Tweet
Tagged under