The awards, given by the Nursing Chapter of the UAB National Alumni Society, go to students who have brought special recognition to the School, contributed above and beyond the requirements for good academic standing, and contributed to community and university service. 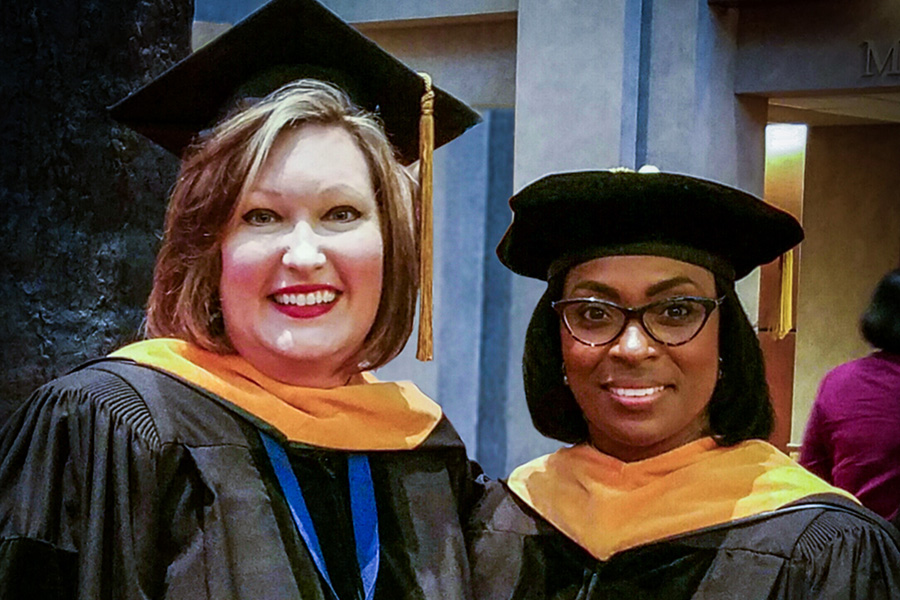 “Tanya has been a committed student and advocate for the UAB School of Nursing, a true professional, and has consistently demonstrated a positive attitude,” Turner said. “It was my sincere pleasure to recommend Tanya for this award. She is a community leader as well as a nursing leader.

“She has a very promising future, and it was a pleasure to serve as her scholarly project faculty chair.”

Brasher’s scholarly project, “Exploring Reasons for Utilizing a Rural Emergency Department for Nonurgent Conditions,” was selected for poster presentations at the School’s on-site DNP Intensive as well as the Joint DNP Intensive held at the University of Alabama in Huntsville. It received second-place awards for Best Visual Display and Most Clinically Impactful, and was also selected as an example of an ideal scholarly project abstract for a future book publication.

Her academic excellence also is demonstrated by membership in Phi Kappa Phi Honor Society and Sigma Theta Tau Honor Society. She is a leader and innovator in nursing home administration and is a Fellow of the American College of Healthcare Executives. She is also a member of the Alabama Quality Task Force.

Brasher is also very active in her community of Hamilton, Alabama, where she is the founding board member of the Hamilton Food Pantry that provides boxes of food to approximately 150 families per month. She is a member of the Cosmopolitan Women’s Club and serves on its Scholarship and Fundraising Committee, which provides scholarships to female seniors at Hamilton High School. Brasher also is on the Health Advisory Board for the Hamilton Work Release/Community Work Center and performs several tours of its facilities to ensure safety for work release inmates.

Dean and Fay B. Ireland Endowed Chair in Nursing Doreen C. Harper, PhD, RN, FAAN, complimented Brasher on all her successes, but particularly her scholarly project.

“The recognition her project received was most fitting, and it made me proud to count Tanya among our students,” Harper said. “Based on her experience as nursing faculty and in hospital administration, I am certain her career will be meaningful and rewarding. I commend her for her hard work and am proud to now be able to call her a graduate of the UAB School of Nursing.”

Brasher currently is a nursing instructor in the Health Studies Division at Northwest Shoals Community College in the Muscle Shoals area. 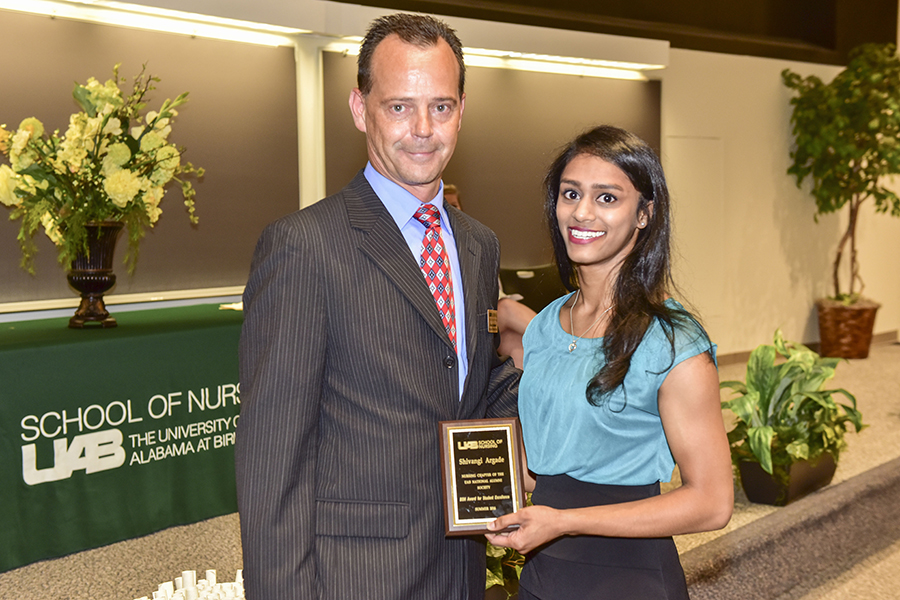 “As a student, Shivangi exceeded expectations,” Langston said. “She was always actively engaged in her academic experience, arriving to class prepared, eager to learn and demonstrating a high level of critical thinking and application. She is also a dedicated leader and has great potential for contributing to the nursing profession.”

In particular, Langston cited Argade’s work with the Student Nurses’ Association (SNA) where she served as secretary, working tirelessly to organize and maintain the group’s records. She also represented the School as part of a group that attended the 2015 National SNA Convention in Phoenix, Arizona.

Argade was also involved in the School’s honors program and served as a peer tutor.

“It was very evident that she took great pride and responsibility in her educational experience at the UAB School of Nursing,” Langston said. “Interacting with a student who so well represented the standards of professionalism and core values that are the foundation of our school was truly a pleasure.”
Read 9289 times Last modified on September 22, 2016
Tweet
Tagged under