Two-time graduate Hornsby receives 2016 Distinguished Alumni Award
By Laura Lesley
Together with the Nursing and Nurse Anesthesia Chapters of the UAB National Alumni Society, the University of Alabama at Birmingham (UAB) School of Nursing held its annual alumni awards event, “Alumni Night 2016,” on Thursday, Oct. 6, 2016. The special event was the last function to ever be held in the UAB School of Nursing Auditorium prior to the start of a $32 million building expansion and renovation.

Larry G. Hornsby, BSN, BS, CRNA, received the 2016 Distinguished Alumni Award. A two-time UAB School of Nursing graduate, Hornsby is the Senior Vice President of Operations for the AmSol Division of NorthStar Anesthesia, which employs 2,000 nurse anesthetists and anesthesiologists in 21 states. Prior to this role, he owned and managed numerous health-related companies, including an anesthesia billing company, anesthesia management and consulting companies, and an anesthesia continuing education seminar company. 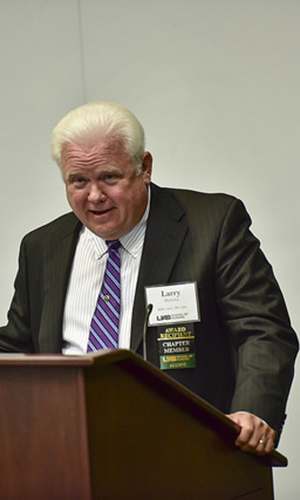 Hornsby is a past president of the American Association of Nurse Anesthetists (AANA) and in 2013 received the organization’s highest honor, the Agatha Hodgins Award for Outstanding Accomplishment. Prior to his term as president, he served on the AANA Board of Directors for four years, holding the offices of Region 7 director, vice president, and president-elect, respectively. He also served as chairman of the AANA Commission on Anesthesia Economics and Reimbursement and as chairman of the Anesthesia Payment Advisory Panel to the AANA Board of Directors. He chaired the AANA CRNA Political Action Committee for six years, as well, bringing in record-breaking contributions during his term.

Hornsby also served on the Joint Commission on Accreditation of Healthcare Organizations Ambulatory Professional Technical Advisory Council for six years. Prior to his AANA service, he served the Alabama Association of Nurse Anesthetists (ALANA) as a member of its Board of Directors, serving two terms as president and chairing several committees. During this period of time, he was appointed by Alabama’a governor as a representative to the State of Alabama Commission on Nursing and served for two years. He also served on the Alabama Board of Nursing Advisory Council to the Nursing Practice/Discipline Committee.

He is a renowned speaker, having extensively lectured on topics including leadership, office-based anesthesia, liability insurance, reimbursement, quality monitoring, data capture and analysis, revenue cycle management, and operating room efficiency. He has authored two book chapters in anesthesia-related texts and contributed to numerous other publications.

As a token of appreciation, UAB School of Nursing Dean and Fay B. Ireland Endowed Chair in Nursing Doreen C. Harper, PhD, RN, FAAN, presented Hornsby with a bound copy of his nomination letters.

Several other alumni were also honored for their service and dedication to nursing and the School.

The Marie L. O'Koren Alumni Award for Innovation is named for the UAB School of Nursing's second dean, Marie L. O'Koren, EdD, MSN, who passed away in 2012. During her tenure as dean, O'Koren changed the landscape of nursing education in Alabama. She led the UAB School of Nursing to become one of the top 20 nursing schools in the country and established a diversified master's program and the first doctorate in nursing program in the Southeast. The award recognizes alumni who, like O'Koren, have made innovative contributions to the field of nursing.

The 2016 recipient of the Marie L. O’Koren Alumni Award for Innovation in Leadership was Elizabeth A. Carlson, PhD, RN, Professor and Chairperson for the Department of Adult Health and Gerontological Nursing at Rush University College of Nursing in Chicago.

Nancy I. Meisler, MSN, received the Marie L. O’Koren Alumni Award for Innovation in Service for her instrumental work in founding Mitchell’s Place, a non-profit organization for children and adolescents with Autism Spectrum Disorders in Birmingham.

The Jo Ann Barnett Award for Compassionate Care honors UAB School of Nursing graduates who exemplify the best in nursing care by performing above and beyond job requirements on a regular basis. The award is named for Jo Ann Barnett, a BSN and MSN graduate of the School who was a champion for the highest quality of compassionate care for her patients and their families. When she passed away in 2002, the Nursing Chapter of the UAB National Alumni Society established the award to honor her legacy. 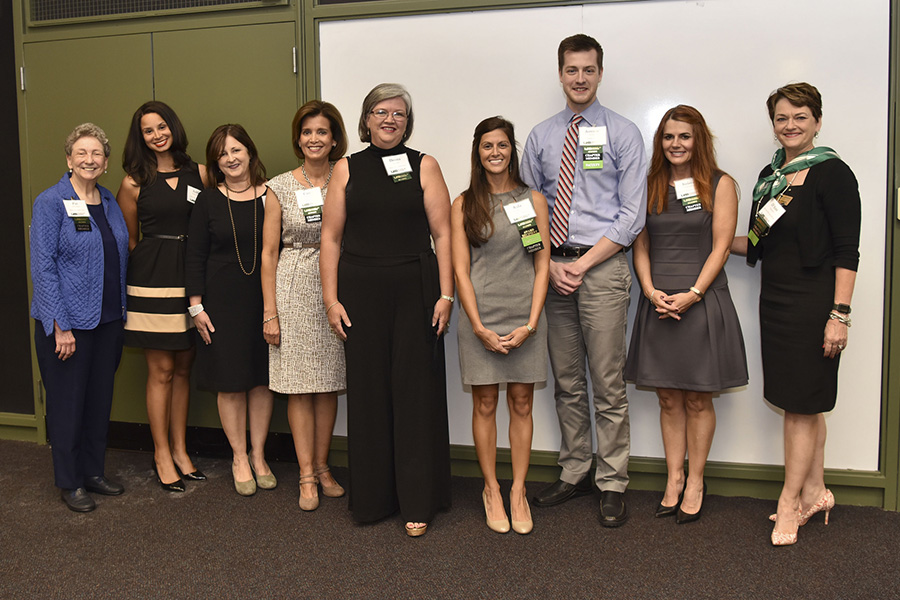 The Young Alumni Merit Award recognizes young nurse leaders who have received a degree from the UAB School of Nursing within the last 10 years and have demonstrated significant accomplishment and leadership in the field of nursing.

The 2016 recipient for the Young Alumni Merit Award was Kala K. Blakely, DNP, CRNP, NP-C, an assistant professor in the School and owner of Hometown Family Medicine.

The Rising Star in Nurse Anesthesia Award recognizes a nurse anesthesia graduate within the last five years who demonstrates excellence as a clinical practitioner and promotes the nurse anesthesia profession through service and outreach.