Reich deployed immediately after graduation to serve in Operation Desert Storm; climbed with two fellow CRNAs, one another UAB alumna
By Laura Lesley
Lisa Reich, CRNA (BSN 1986, BS 1990), has had an adventurous career in nurse anesthesia that began when she was deployed to Saudi Arabia as a new graduate and most recently took her to the summit of Mount Kilimanjaro.

“I had just graduated and started working at Brookwood Hospital in Birmingham, Alabama as a Certified Registered Nurse Anesthetist (CRNA) when I found out I would be deployed immediately,” she said. “I served in Saudi Arabia during Operation Desert Storm for six months as a new CRNA.”

Even though Reich knew she would likely be deployed as part of her enlistment in the National Guard’s Specialized Training Assistance Program (STRAP) that helped cover her educational expenses, it was still a shock to be called on so soon.

“During that time before the luxuries of internet access and cell phones, it was hard for my family to rarely hear from me,” she said. “I would drive two hours in the middle of the desert to get to a phone bank, and then stand in line for a chance to call my family.” 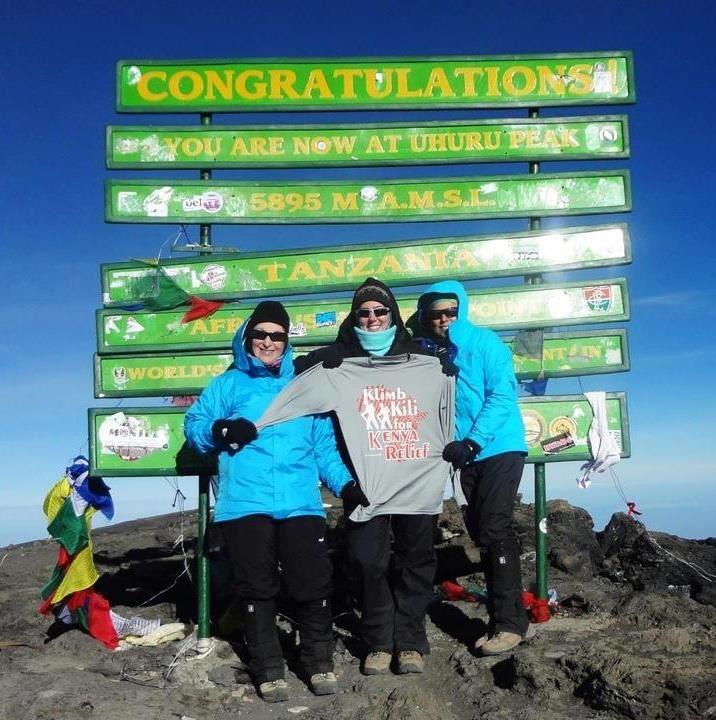 Reich served in the Alabama Army National Guard’s 109th Evacuation Hospital Unit and worked in a 400-bed hospital. Even though the hospital was away from the front-lines, wartime conditions were still evident.

“We had two stretchers per operating room with two surgeries going at once, and most of our patients came from enemy lines.”

As daunting as it was to be deployed, Reich was comforted by personally knowing who she would be serving alongside. The UAB classmate who she enlisted in the STRAP program with was in her unit, and she had gotten to know her other comrades during their monthly training drills.

“Knowing who I would be deployed with was a huge draw for me to the National Guard,” Reich said. This same spirit of camaraderie is what led her to climb Mt. Kilimanjaro later in her career.

In 2012, a friend and fellow CRNA, Pennie Nichols, pitched an idea to Reich that involved climbing Mount Kilimanjaro to benefit Kenya Relief, an Alabama-based charity organization founded by Steve James, CRNA. Having already one adventure -- Operation Desert Storm – under her belt , Reich said, “That sounds like fun!”

Plans were for Reich, Nichols, and two-time UAB School of Nursing alumna Salima Mulji to climb Mt. Kilimanjaro together. After conquering “Kili,” they planned to fly to Kenya to provide anesthesia care for several days at a Kenya Relief clinic.

The trio trained and raised support for Kenya Relief for six months prior to the start of their journey.

“We worked out with a trainer and hiked Oak Mountain [in the Birmingham area] and Mount Cheaha [in North Alabama],” said Reich. “But we never had an opportunity to train in similar altitude conditions.”

With friends and supporters cheering them on from home and watching their video updates on social media, the three adventurers set out for Tanzania.

Reich, Nichols, and Mulji were successful in summiting Mount Kilimanjaro after four days of climbing. After snapping a few photographs, Reich, suffering from a severe case of bronchitis, needed to descend as soon as possible.

“Being a nurse anesthetist, I knew how serious my case was,” she said. “My oxygen saturation was dangerously low at 66 percent.”

The decision was made to get Reich down the mountain to receive medical attention as quickly as possible. Compared to the four-day climb, the trek down was expeditious, taking only one day. Nichols and Mulji were instrumental in their safe descent, which involved Reich being carried down the mountain on a stretcher by locals.  After calling the U.S. Embassy for advice on best local hospitals, Reich was treated and became well enough to fly home the next day.

In spite of her health crisis, Reich says she is grateful for her experience of summiting Mount Kilimanjaro and being able to benefit Kenya Relief, a faith-based ministry operating a surgery center, school and orphanage in Kenya.

Even during her formative years as a nurse anesthesia student, Reich was setting in motion the beginnings of her adventurous career centered on camaraderie. “We were a very close class, and I remember us all going to the American Association of Nurse Anesthetists (AANA) meeting, which was in Boston that year,” she said. “It was very exciting to go and see the different components of the organization.”

Today, Reich is a regular supporter of student attendance at AANA meetings. “Knowing the debt students incur today, I know they don’t have a whole lot of extra change—so I’m happy to help.”

“Nursing is a great profession and has evolved so much since I was in school. Every job does not require scrubs anymore—today, a nursing education can lead to a career in informatics, health care management, or education.”

For Reich, her UAB nursing education led her across the world, through exciting adventures, and to lifelong friendships.
Read 8059 times Last modified on March 01, 2017
Tweet