The University of Alabama at Birmingham (UAB) School of Nursing, together with the Nursing and Nurse Anesthesia Chapters of the UAB National Alumni Society, hosted its annual “Alumni Night” dinner and awards celebration on Thursday, September 14, 2017. The event was held at the UAB Hill Student Center Ballroom as the UAB School of Nursing undergoes a historic building expansion and renovation.

The evening’s events began with a reception, followed by a seated dinner and presentation made by Phyllis N. Horns, PhD, RN, FAAN, recipient of the 2017 UAB School of Nursing Distinguished Alumni Award. Following her presentation, guests enjoyed the alumni awards presentation, Nursing Alumni Chapter annual meeting, and special entertainment by Three on a String. 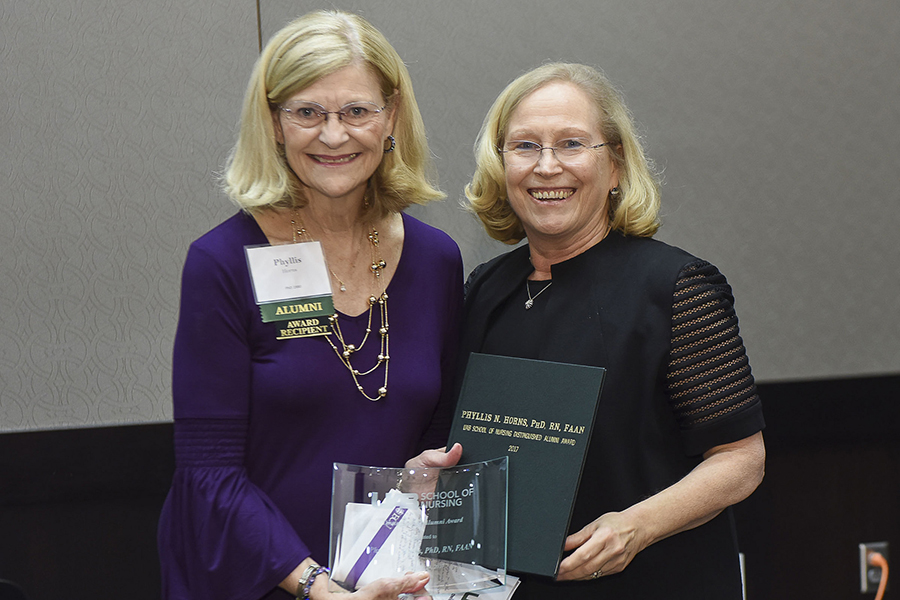 Dr. Phyllis Horns, left, was the recipient of the UAB School of Nursing 2017 Distinguished Alumni Award.Doreen C. Harper, PhD, RN, FAAN, Dean and Fay B. Ireland Endowed Chair in Nursing, presented the 2017 Distinguished Alumni Award to Horns. Established in 1989, this award is the highest honor bestowed by the School, recognizing an outstanding graduate who has demonstrated leadership, innovation and entrepreneurship to significantly enhance nursing on state and national levels through clinical or administrative practice.

Horns, Vice Chancellor for Health Sciences at East Carolina University, earned her Doctor of Philosophy (PhD) in Nursing from the UAB School of Nursing in 1980. She is responsible for the entire Health Sciences Division, which includes approximately 4,600 students, more than 2,600 employees and utilizes more than 1,600 clinical agencies for its educational programs and patient care services.

As a token of appreciation, Harper presented Horns with a bound copy of her nomination letters.

Several other alumni were honored for their service and dedication to nursing and the School.

The Marie L. O'Koren Alumni Award for Innovation was presented to two deserving alumni. The award is named for the UAB School of Nursing’s second dean, Marie L. O'Koren, EdD, MSN. During her tenure as dean, O'Koren changed the landscape of nursing education in Alabama. She led the UAB School of Nursing to become one of the top 20 nursing schools in the country and established a diversified master's program and the first doctorate in nursing program in the Southeast. O’Koren passed away in 2012. The award recognizes alumni who, like O'Koren, have made innovative contributions to the field of nursing. They are:

The Young Alumni Merit Award, established in 2012, recognizes outstanding alumni who have graduated within the last 10 years and are working in the health care setting. This year’s recipient was Kristen C. Waddell, MSN, CPNP-AC, CRNP, CCRN. Waddel earned her Bachelor of Science in Nursing (BSN) degree from the UAB School of Nursing in 2007 and her Master of Science in Nursing (MSN) in 2013. She has worked as a Registered Nurse in the Pediatric Intensive Care Unit (PICU) at Children’s of Alabama for six years and as a Pediatric Nurse Practitioner there for four years. She is also a co-developer and coordinator for the Children’s of Alabama Community Healthcare Education Simulation program, which is a multi-disciplinary simulation team performing in-situ pediatric simulation teaching and assessments in community health departments and inpatient pediatric units throughout Alabama.

The Career Achievement in Nurse Anesthesia Award recognizes a nurse anesthesia graduate who has made significant contributions to the nurse anesthesia profession and has actively been involved in improving the quality and safety of patient care. The recipient of this award must also exemplify sustained efforts to lead and promote the nurse anesthesia profession. Ronald C. Whorton, MNA, CRNA, received this year’s award. He earned his Bachelor of Science (BS) and Masters in Nurse Anesthesia (MNA) from UAB in 1987 and 2008, respectively. Formerly serving UAB as a Hospital Chief CRNA and the Director of Anesthesia Services for the UAB Health System, Whorton has since served as Vice President of Clinical Operations for AmSol. After the company merged with NorthStar Anesthesia, Whorton became Regional CRNA Director, managing multiple anesthesia departments across the southeast. He is a past-president of the Alabama Association of Nurse Anesthetists. 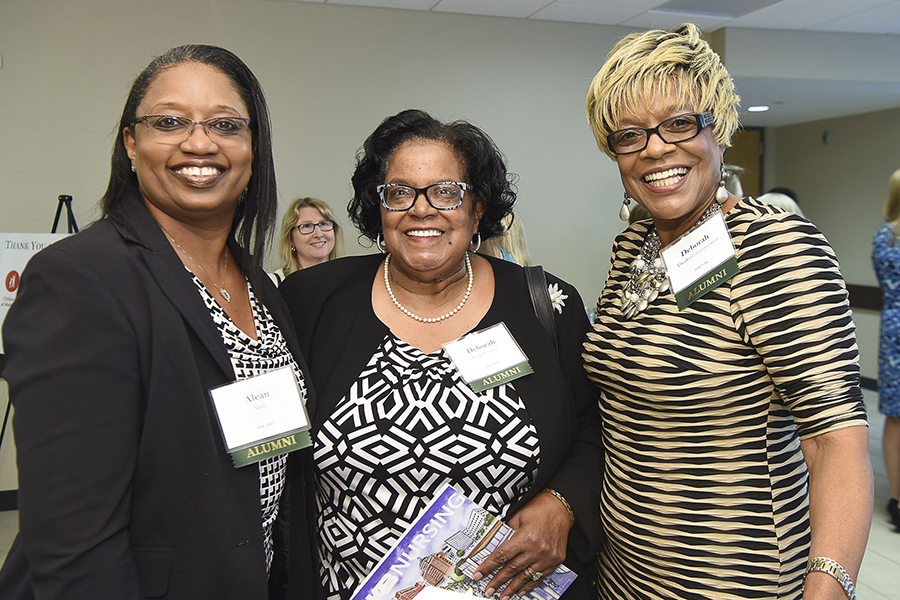 The Rising Star in Nurse Anesthesia Award recognizes a nurse anesthesia graduate who has graduated within the last five years and demonstrates excellence as a clinical practitioner and professional advocate. This year’s recipient was Cari J. Evans, MSN, CRNA, who earned her BSN and MSN degrees from the UAB School of Nursing in 2008 and 2016, respectively. After working as Registered Nurse in Cardiovascular Intensive Care Units at both UAB Hospital and Vanderbilt Medical Center for several years, Evans began pursuing her nurse anesthesia education and now works as a Staff CRNA at UAB Hospital. She aspires to obtain a PhD in Nursing at UAB and seek an elected position on the Alabama Association of Nurse Anesthetists board of directors.

The Jo Ann Barnett Award for Compassionate Care was awarded to three deserving alumni this year. The award memorializes Barnett, a UAB School of Nursing graduate and neonatal nurse practitioner who was a champion for the highest quality of compassionate care for her patients and their families. Barnett passed away in 2002 and that year, the Nursing Chapter of the UAB National Alumni Society established the award to honor her service to her patients, community and alma mater. This year’s three recipients are: