University of Alabama at Birmingham (UAB) School of Nursing alumna Patricia E. Thompson, EdD, RN, FAAN, has received the National League for Nursing’s (NLN) President’s Award, the organization’s highest honor for exemplifying “he highest levels of scholarship, teaching, and clinical practice in the profession of nursing throughout her long and distinguished career.” 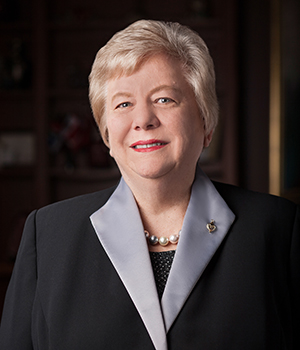 Dr. Pat ThompsonShe was presented the award -- which recognizes leaders who have been instrumental in advancing health care, as demonstrated by their years of service and distinctive accomplishments in nursing, nursing education, and related health care institutions and corporations -- at the NLN 2017 Education Summit in San Diego, California, on September 14.

Thompson is stepping down after having served as Chief Executive Officer of Sigma Theta Tau International (STTI) for nearly a decade. She also has held a variety of leadership positions for STTI, including international president from 1999-2001. Prior to assuming the role of CEO, Thompson was Associate Dean for Academic Programs in the College of Nursing at the University of Arkansas for Medical Sciences.

Thompson led STTI through a period of unprecedented global expansion, growing the organization to 135,000 members.

“It is an exciting time to be a member of the honor society, when our leadership, scholarship and knowledge offerings are the pinnacle of professional development for nurses and the global communities they serve,” she said.

Thompson earned her Master of Science in Nursing (MSN) from the UAB School of Nursing in 1971. She was awarded the School’s highest honor, the Distinguished Alumni Award, in 2008. In 2010, she was named one of the School’s 60 Visionary Leaders.
Read 3749 times Last modified on March 22, 2019
Tweet
Tagged under