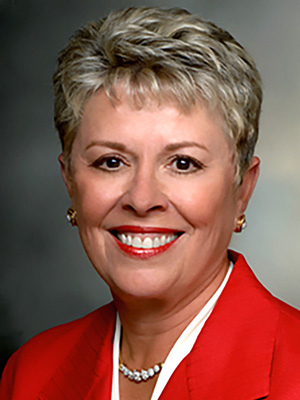 University of Alabama at Birmingham (UAB) School of Nursing Honorary Alumna Connie H. Yarbro, MS, RN, FAAN, is one of five nurse leaders to receive the American Academy of Nursing’s (AAN) most prestigious award, the designation as a “Living Legend.”

The AAN recognizes a small group of Fellows as Living Legends in honor of their extraordinary contributions to the nursing profession. Awardees were honored at the organization’s conference in Washington, D.C., on October 5.

Yarbro, an honorary alumna of the UAB School of Nursing, worked alongside Dr. John Durant at UAB from 1972 to 1979 to build the UAB Comprehensive Cancer Center. Through her interprofessional partnership with Dr. Durant, Yarbro helped establish the first physician/nurse practitioner patient care model that has become a standard of care at UAB and other highly acclaimed medical centers across the country.

Yarbro is the founding editor of Seminars in Oncology Nursing and has authored six oncology nursing textbooks. She also co-founded the Oncology Nursing Society. She presents regularly at numerous professional meetings and has served as lead editor for many prestigious publications.

Also a member of the UAB School of Nursing’s National Advisory Council, Yarbro serves in an advisory role to Dean Doreen C. Harper, PhD, RN, FAAN. Established in 2015, the Council examines and facilitates innovative and practical strategies with the goal of making the UAB School of Nursing the premier educational institution that mobilizes students at all levels to practice nursing without walls.
Read 4903 times Last modified on September 27, 2019
Tweet
Tagged under